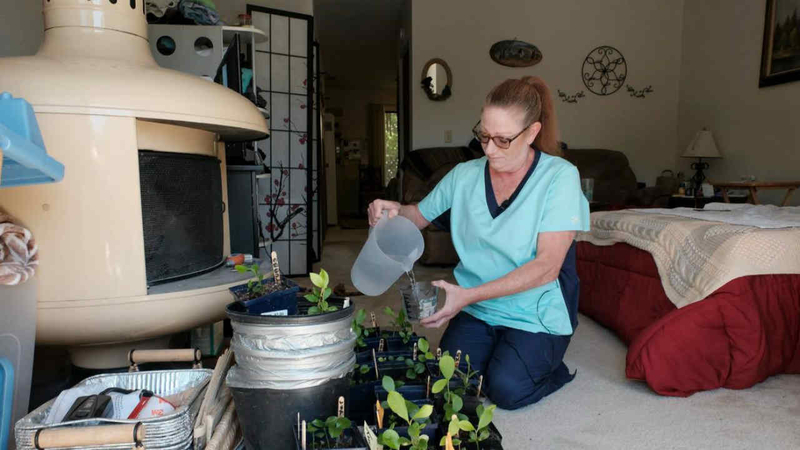 SANTA ROSA, Calif. (KGO) -- "If life gives you lemons, make lemonade." That's a cliché until you see someone acting on the words, for real.

When those lemons arrive in the form of a firestorm and decimated neighborhood, it really hits home, especially when anyone meets Penny Phillips of Santa Rosa.

After losing her family home in Coffey Park, Penny moved to a small apartment with a back deck just big enough to nurture a few plants that survived the fire. She has a green thumb.

And, she always loved lemons. "Lemonade, lemon chicken, " the list of lemon dishes goes on and on. "Meyer lemons are sweeter. But, lemons are expensive," said Penny. "Two for a dollar?" She began experimenting by harvesting seeds and trying to grow her own.

At the Valero station on Farmers Lane where Penny works part-time as a cashier, customers always asked about her lemon tree project. Then, the firestorm came. "It all changed," said Penny.

There used to be plenty of lemon trees in Coffee Park and all of the firestorm neighborhoods. If you find one now, it's likely to be just a black stump in the ground. With spring in full bloom, burned out residents began missing those lemon trees. When word spread about Penny on Facebook's Santa Rosa Firestorm Update, they began asking Penny for saplings. She has been happy to oblige.

TIMELINE: How the deadly North Bay fires unfolded in 6 hours

Penny now has almost 40 young lemon tree saplings growing in her bedroom next to the fireplace. All have names. As of now, all are spoken for. Tanya Williams came over to pick up her small sapling, this morning. "This isn't just about lemons trees," she told us.

"It's hope," added Penny. "A gift of life," she said through misty eyes.

So true. So sweet. So appropriate when, after the interview, she made lemonade.