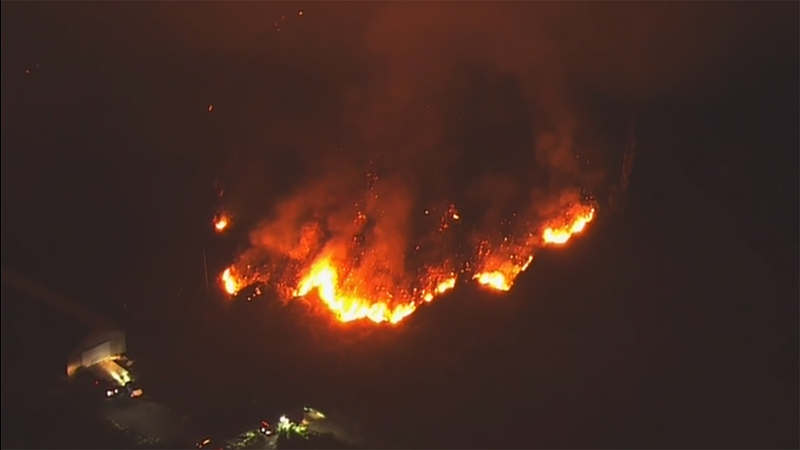 Some suspect the poles were cut by copper thieves, but firefighters haven't noticed any of it missing from the poles. Officials say copper theft is a growing issue on the island.

Vallejo resident Myrna Hayes was jolted out of her sleep by the sound of fire trucks Wednesday morning.

"The trucks just kept on coming and I was counting them...one, two, three," Hayes said. "They were going so far away and I said, 'Oh no what if that's my park?'"

It was the park Hayes was thinking of. Around 3 a.m., an orange glow and smoke could be seen coming from the Mare Island Preserve. Emergency crews said the property was not easy to access, which is why it took them about five hours to completely contain the fire.

"There were power poles, utility poles, that were cut down that caused the lines to come down which sparked the fire," Kevin Brown, a Vallejo Fire Department spokesperson said.

Brown said five power poles were purposefully cut down. Two of the power poles started the fire. It raised the question, was someone trying to steal copper?

"As far as an answer goes, there's been an abundance of copper thefts here on the island because so many portions of this island are not monitored with abandoned buildings," Brown said. "With these poles, as to what our investigation leads. We don't see any copper missing. But, that's not to say that wasn't the intent."

"I would like to believe that it was just innocent people just making a living, but I don't really see it that way," Hayes said. "Because of the incident a month ago where there was no copper taken."

Hayes has been the volunteer manager of the Mare Island Preserve for 11 years. She showed ABC7 News video of a pole she found cut down last month. Hayes believes something else suspicious may be going on in the island preserve, beyond a suspected copper theft. Vallejo Fire told ABC7 News it's all under investigation.

Vallejo Fire shared this vid with me. 5 power poles were purposefully cut down. 2 poles started the fire around 3am.
I asked, “Was this fire caused by copper thieves?”
It was told it’s possible. There’s been an issue with copper thieves on Mare Island. https://t.co/QyK0QYgXmW pic.twitter.com/BCebJsKWIw