Business calls out Oakland leaders after destructive May Day protests 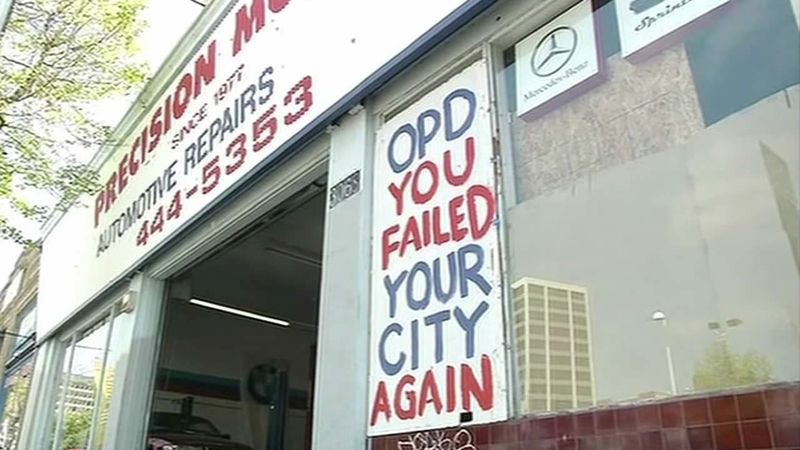 Business calls out Oakland leaders after May Day protests

OAKLAND, Calif. (KGO) -- A downtown business owner is painting an unflattering picture of the leadership at Oakland City Hall. You can understand their frustration -- business owners having to clean up time after time from vandals who take advantage of demonstrations to go wild. Merchants say they've had about enough.

Groom has a sense of humor, but she's absolutely serious about holding city leaders accountable to their promises.

Instead of a window display, the small business owner was busy Monday painting plywood.

"The first one said, 'OPD you failed your city again,'" she said.

Vandals shattered the glass of Precision Motors along Broadway during May Day protests more than a week ago.

"It's frustrating because it seems pretty predictable, but nobody seems to be able to stop it," said Groom.

Tens of thousands of dollars in damage is still evident along Auto Row, where she and her husband work.

"Since I'm the only one who can't fix cars, I get to do the painting," she said.

The couple's second message to city leaders: "Riot tourism, visit Oakland Schaaf and Whent will show you which block to trash."

In days following the destruction, Mayor Libby Schaaf said the city is working to create a business restoration fund that would offer zero or low interest loans to impacted businesses and they defer permit costs for replacing windows.

The city reiterated those efforts in an email on Monday. But Groom says she finds the idea insulting and says the loan would essentially come from her taxes.

"So they want to make a low interest loan from my money to begin with?" she asked. "And they're going to make money on the money that I already gave them?"

Prevention, not payment is what Groom is seeking. And her message will be heard, or at least read.

"This one just kind of just popped into my head this morning, I like making word puns," said Groom with a laugh. "If we keep putting her name up here it should get her attention."

Precision Motors, an auto shop that was vandalized on May 1, 2015 in Oakland, Calif., is using the walls of their business to call out Mayor Libby Schaaf.

"The Oakland Police Department will effect an arrest according to the law (California Penal Code) when it is safe for the office(s) and the public to do so in crowd situations. However, if an arrest cannot be made safely, we conduct follow-up investigations. These investigations include reviewing:
We also talk to witnesses and ask anyone with information or video or photo footage to forward it to the Oakland Police Department."