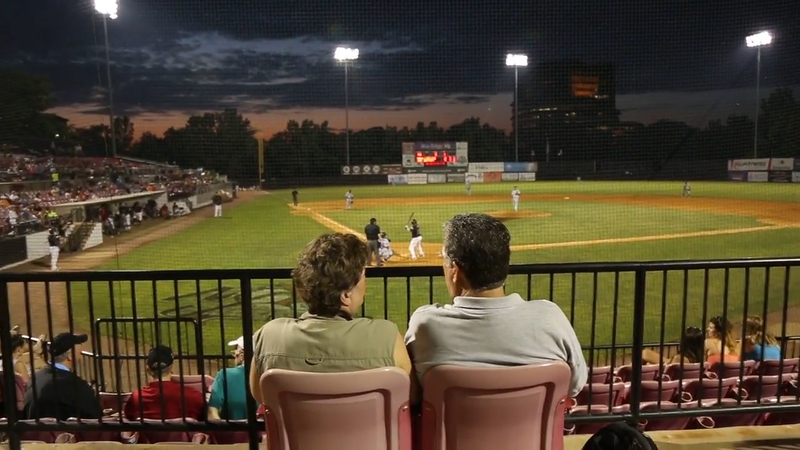 SAN JOSE, Calif. (KGO) -- There's nothing like walking into a new ballpark.

The sights and sounds of the teams warming up, the smell of hot dogs and peanuts in the air, it's a feeling all baseball fans have had.

But for San Jose's John and Vicki Hoppin, they've experienced that feeling 160 times.

"I've always wanted to be a full-time RV'er so I told John that's what I wanted to do," Vicki said. "He wanted no part of it. So I suggested that we do baseball and he agreed."

The Hoppin's spent some time researching parks and came up with a plan to check out the grass-roots form of baseball at the minor league and independent league levels.

"We pretty much hit every state in the continental U.S. and some in Canada," John said. "I think we did a count one time and it was about 450 ballgames over the four-plus season time over about 37,000 miles."

"The total ended up being 160 ballparks," Vicki said. "130 affiliated and 30 independents. From there, the idea of the book evolved."

Vicki and John put together two volumes of books appropriately named, "Ballpark 2 Ballpark", that told the stories of their journey over their four-plus year journey.

But they wrote the book from the perspective of the people that minor league baseball means the most to.

While writing @BPark2BPark, the Hoppin's made stops at 160 minor and independent ball parks across North America. These are some of the fun sights they saw during their 4+ year journey. pic.twitter.com/NA0nm94KUz

"We tried to capture the magic of minor league through the stories the stories of the people that we met," Vicki said.

"Yes, exactly that," John said. "We wanted to present the story of minor league baseball in all of its fun and family atmosphere. We wanted to do independents as well because we knew about independent baseball and how those communities felt it was as important to them as affiliated baseball. We've come across these communities that are filled with wonderful people," John said. "It didn't matter if we were north, south, east or west, people really do care about each other."

The Hoppin's shared stories of anyone and everyone affiliated with teams.

"John interviewed over 1,000 people from league presidents, general managers and team owners to ushers, mascots and crazy fans," Vicki said. "It was all levels of people that are in these ballparks."

From watching Mariano Rivera and Cal Ripken's children play in North Carolina, to their favorite in-between inning games, the two saw it all.

Vicki loves the people that she met over her journey and that minor league baseball is still a family oriented event that's affordable.

John appreciates the history of the game and the locations.

"As many people know, baseball has been around for an awful long time," John said. "Each park and team, whether they have been in that stadium for a long time or moved from stadium to stadium, even city to city, they bring the history with them."

A place that the two have plenty of history at is San Jose, Calif.

The North American Journey began and ended in the city where their love for the sport truly began.

Over Labor Day weekend, the Hoppin's finally stopped the wheels of the RV back at their home.

For John and Vicki Hoppin, their love of minor league baseball started in San Jose with the @SJGiants. That blossomed into a passion that they got to share in their book @BPark2BPark. This past weekend, they finished their tour back where it all started. pic.twitter.com/jdHnqtlI7d

If you'd like to learn more about John and Vicki Hoppin or purchase their book "Ballpark 2 Ballpark", you can visit their website here.

Last book signing of our season on on the road today @SJGiants and their last regular season game too. Come out and have some @milb fun! #sjgiants #minorleaguebaseball #californialeague pic.twitter.com/W4o6bkFGwT