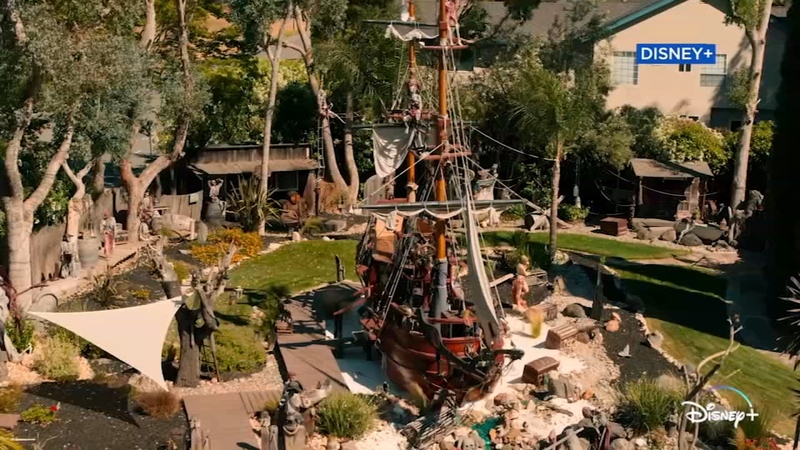 MORGAN HILL, Calif. (KGO) -- A secret pirate's paradise in a Morgan Hill backyard is about to be known across the country.

The secret is out, Morgan's Cove will appear on National Geographic's "The World According to Jeff Goldblum" on Disney+ highlighting the best backyards in the country.

"It's really kind of an honor to have it looked at it that way because we enjoy every day of every minute of every hour when we're here at the cove doing what we do," Owner Rich Firato said.

Have you ever wanted to walkthrough the Pirates of the Caribbean ride? You can at this Bay Area home!

Rich Firato and his crew worked on this backyard complete with a 1/3 scale pirate ship for two decades to give people a real-life Pirates of the Caribbean experience and put Morgan Hill on the map.

Morgan's Cove is literally the hidden treasure of Morgan Hill. We introduced you to Firato and the crew two years ago and now, the pirate paradise will be seen on a national stage on Disney+ this week.

"Well, it was pretty amazing when they came," Firato's friend Kevin Fernades said. "They have this huge crew of 18-20 people here and they have these set-ups of huge cameras on their backs with backpacks. it was a little intimidating at first."

With the novel coronavirus pandemic closing amusement parks across the country, one Napa man decided to bring one of his favorite Disneyland roller coasters to his home.

Once nerves settled, Firato said the team shot for 12 hours because Jeff Goldblum was so interested in every detail Firato dedicated years to. Now, Goldblum is officially part of the pirate crew.

"We had to put him through some tests of firing a cannon, throwing an axe and dealing with the rigging and the ship," Firato said. "I was really not overwhelmed by who he was other than that he was coming on to our ship as part of the crew."
This all took place in May and the crew has been waiting patiently to see their debut.

With the help of Disney+, we gave Firato and his friend Kevin Fernandes a first look at the episode.

The moment when you see yourself on @disneyplus!

Morgan Hill's secret pirate paradise is a secret no more. Morgan's Cove will soon appear on The World According to Jeff Goldblum! We gave the crew a sneak peek. See when the show airs tonight at 4pm on ABC7 https://t.co/uErSxbKDMs pic.twitter.com/TPD5wvdU6J

"That was pretty remarkable what you just showed me," Firato said. "Not having any blueprints or plans, we just did it from the seat of our pants. And for it to come out like this, for the world to see what we've created is incredible."

You can watch the backyard episode of the World According to Jeff Goldblum on Jan. 19 on Disney Plus.