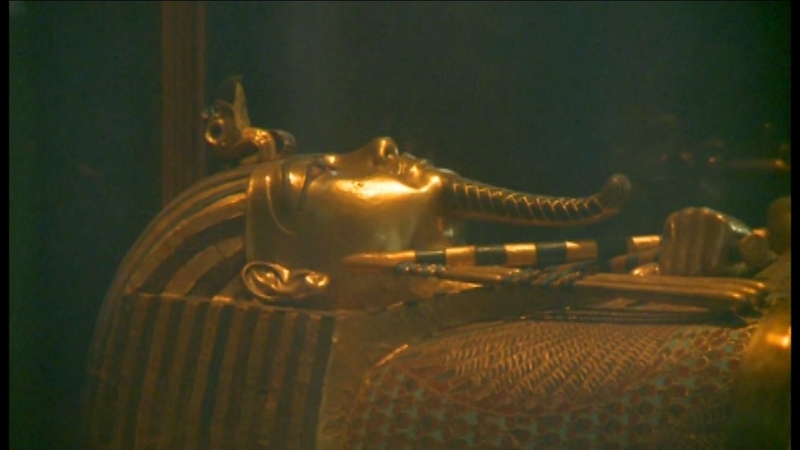 CAIRO, Egypt -- Ancient mummies of Egypt's royal pharaohs will emerge from their resting places this weekend and parade through the streets of Cairo in search of a new home.

What sounds like the plot of a movie is in fact part of a lavish celebration of Egypt's history and a project to relocate some of its greatest treasures to a new high-tech facility.

On Saturday, the mummies of Ramses the Great and 21 of his fellow pharaohs will take part in what is being billed as "The Pharaoh's Golden Parade," a highly anticipated event organized by the Egyptian Ministry of Tourism and Antiquities.

It's reported that the celebrations will include horse-drawn chariots, choirs singing in ancient languages and a plethora of movie stars and dignitaries, but Egyptian authorities have kept official details of the event under lock and key.

"It is a surprise," Ahmed Ghoneim, executive director of the National Museum of Egyptian Civilization, the institution which will be the final resting place for the mummies, tells CNN.

Nevertheless, it's hard to keep an event of this magnitude a surprise, especially when dress rehearsals recently took place in the center of Cairo. Excited Egyptians snapped photos of custom-made mummy vehicles adorned with golden ancient motifs and hastily uploaded them to social media.

The aim of the parade is to move the 18 kings and four queens of Egypt, along with their coffins and belongings, from their old home at The Egyptian Museum.

No, not the vast Grand Egyptian Museum in Giza which is also due to open to the public later this year. The NMEC is a completely different museum in Cairo's Fustat neighborhood that will complete a trio of must-see Egyptian-themed museums in and around Cairo.

Although the NMEC had a partial opening in 2017, the parade will signify the grand opening.

"It's a presidential opening," says Ghoneim. And the completion of the Hall of Royal Mummies which looks to be a unique museum experience.

Ghoneim says visitors entering the Hall of Royal Mummies will experience something akin to entering a tomb in the Valley of the Kings.

All 22 royal mummies are from the New Kingdom, an era where tombs were built underground with hidden entrances to ward off grave robbers. A world apart, and about 600 years, from their flamboyant Old Kingdom royal counterparts who built colossal pyramid tombs.

Dr. Mostafa Ismail, head of conservation at the Mummies Conservation Lab and Storeroom at the NMEC, led a team of 48 people to prepare the royal mummies.

The conservation process, he tells CNN, involves placing each mummy in an oxygen-free, nitrogen capsule "which can keep it preserved without being damaged from the effects of humidity, especially we're talking about bacteria, fungi, and insects."

The capsule is surrounded by soft material that distributes pressure and reduces vibrations during transportation.

When the mummies arrive at the NMEC, the display units will have the exact same conditions as the nitrogen capsules. "So there will not be any shock for the mummy when we take it from the box and put it in these units," Ismail adds.

Accompanying each mummy will be any belongings discovered alongside them, including their coffins.

Displays will also show CT scans which reveal what is beneath the wraps, and sometimes any breaks in bones or diseases that afflicted the royals.

"The main thing that we want the visitors to know about these mummies, is how they have been mummified and preserved for a long time."

When asked if his team discovered anything new about the mummies in preparing them for the move, Ismail remarked: "a lot of things," but none that he would reveal before the parade. So there are more surprises to come.

A new cultural hub in Cairo

Undoubtedly the Hall of Royal Mummies will be the star attraction for visitors to The National Museum of Egyptian Civilization, but Executive Director Ahmed Ghoneim hopes to position the museum differently to its neighboring institutions.

"I'm not focusing on the Pharaonic era as most people would think," he says. "Most Egyptians and non-Egyptians, whenever they go to an Egyptian museum then they think they're going to see the pharaohs.

"Here I'm setting myself differently, I'm telling a different story, going across history and coming to the present."

The first temporary exhibition will focus on Egyptian textiles and fashion. "All of the history from carpets to clothing" says Ghoneim.

"A place that offers everything, part educational, part cultural, part amusement, part night time dining place, and so on. It's something that's unique."

And at last, 3,234 years after his death, Rameses II may finally be laid to rest.