KGO
By Wayne Freedman
WEST OAKLAND, Calif. (KGO) -- Oakland's art community, along with Oakland students, is vowing to continue their work after a fellow artist was gunned down in broad daylight.

Tuesday morning around 10:30 a.m., 27-year-old Antonio Ramos, was shot while working on a mural under a freeway overpass in West Oakland. He later died.

Oakland Police Chief Sean Whent said this fatal shooting was "really tragic" and "totally unacceptable." He added Ramos was "someone who was trying to make a positive difference in this city and lost his life."

Friends of Ramos said a man was messing with their equipment and Ramos asked them to stop, then before they knew it, he was shot while working on the mural.

Ramos' friends gathered in pain next to a canvas that had borne a message of hope. "I think it's real tragic since the whole mural is about community revitalization," David Platford said.

Police are interviewing witnesses, including artists who were with the victim, and will review footage from surveillance cameras in the area. "This is a busy area with a mix of commercial and residential buildings so we hope someone saw something," Watson said.

Officials said the artists were working on the Oakland Super Heroes Mural Project, which is being organized by ArtEsteem, the art and literacy arm of Attitudinal Healing Connection, a West Oakland Group that seeks to stop violence by inspiring people with art and education.

Oakland Mayor Libby Schaaf said, "Attitudinal Healing Connection is one of the most heartfelt organizations in the city and provides hope and opportunity for young people, and I know their people well. Every loss of life is tragic and I had a very tragic heart when I learned about this."

Students at West Oakland Middle School created the idea for the mural where a boy with a musical car spreads peace and love to heal his violent neighborhood. The fantasy was shattered by reality.

Organizers said students from the middle school planned to help paint the mural along with professional muralists at an event scheduled for Wednesday. A group of students still plan on painting the mural Wednesday.

Amana Harris runs the nonprofit that oversees the mural project. "I don't want to even believe that we just live in a society where this consistently happens to young people," said Harris. "Antonio had this huge smile. He just was a bright light."

"We don't have that person in this world. We're still stuck with these people around here still just destroying stuff," Jackson said.

Now the artists plan to dedicate this mural of hope to Ramos.

Police are still searching for the suspect and are asking anyone with information to call the police department. There have been 72 murders in Oakland this year. 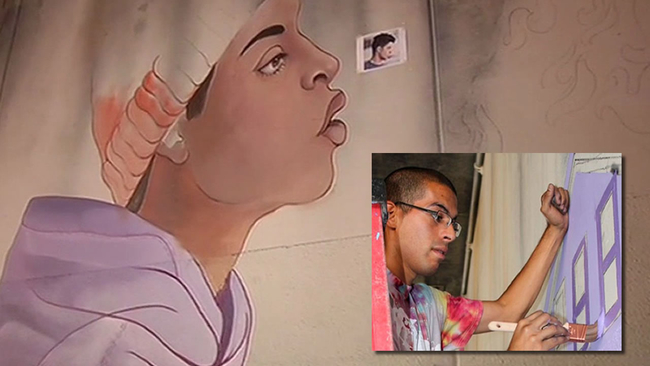