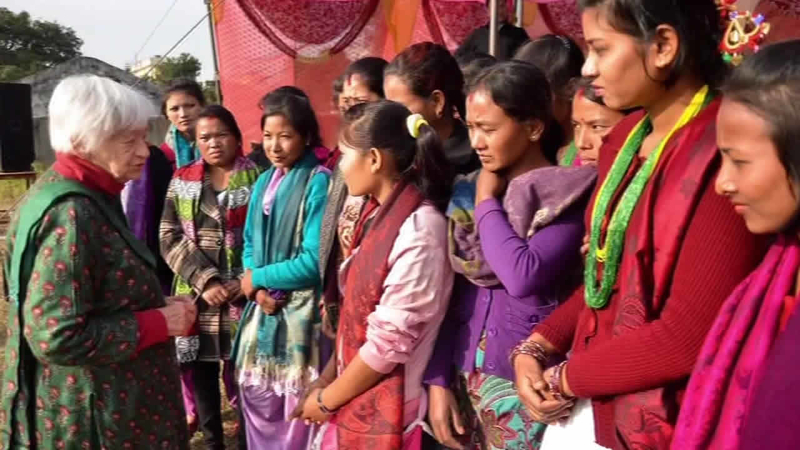 SAUSALITO, Calif. (KGO) -- We want to bring you up to date on an incredible success story, a Sausalito woman who has helped free thousands of child slaves on the other side of the world. ABC7 News first introduced you to Olga Murray 16 years ago and she has not slowed down since.

Olga is a retired lawyer, now 89 years old, with a list of achievements she says is "beyond anything I ever imagined."

Olga set the stage for her amazing aid program for children 30 years ago when she went on a trek in Nepal. "We ran across many, many children on the trail and they all wanted to go to school," she told us. Sending those children to school became Olga's obsession.

She founded the Nepal Youth Foundation and started raising money to provide scholarships, homes for abandoned children, and nutrition programs. Then Olga and her team learned about a cruel practice in Western Nepal where young girls were being sold as indentured servants. "I'm talking about little tiny girls, some 6, 7, 8, 9 years old going off to a city, working 18 hours a day and not going to school" Olga said.

The Nepal Youth Foundation resolved to help those girls. The rescue effort was led by Som Paneru, who years before had himself received a scholarship from Olga. Now he is the foundation's president and he was appalled at the sale of children in his own country.

"Nobody even paid attention that little girls were being sold and bought every day," according to Paneru.

The girls were being sold by their own parents, desperately poor families who felt they had no other way to survive. The girls would work for a year and then be sold again for the next year.

Paneru came up with a plan, an incentive for parents if they sent their girls to school instead of work. Olga explained they gave "each family a baby piglet and they could raise that piglet, and at the end of the year sell it for as much or more as they got for their daughter's labor."

The results are phenomenal. Almost 13,000 girls freed from slavery in a little more than a decade.

Most of the rescued girls are in school, but the older ones now also get vocational training. The foundation has launched a co-op loan fund to help the young women start their own businesses. Olga says several have been extremely successful with businesses including vegetable farms and tailor shops. "We trained the only plumber, woman plumber, in Nepal. And we have the only motorcycle repair shop in Nepal that's run by a woman." Some of the women have even made enough money to support their parents and pay for their own college education.

The Nepal Youth Foundation also inspired a major public awareness campaign that has virtually eliminated the practice of selling child labor in Nepal. The government has made it illegal, and an organization of freed girls now runs the campaign to keep up pressure to make sure the practice does not come back.

Earlier this year, Olga was at a public celebration for freed girls in Nepal. She says she looked out and saw "30 girls we had rescued who had just taken the college entrance exam and were going to college. And I thought, 'This is victory!'"

The Nepal Youth Foundation now gets contributions from around the world, but the first donors were all from the Bay Area, and the tradition continues with contributors of all ages. At the foundation's annual gathering in San Francisco, middle school girls from Marin Horizon School in Mill Valley presented a check for $9,100. They raised it with bake sales, babysitting and a read-a-thon.

This month the foundation's major push is to increase the co-op loan fund for freed young women who want to start businesses. Women already in the program have re-invested $40,000 to help others. But there is a huge need, so the foundation's goal is to match that with another $40,000 in donations.

If you would like to contribute to the Freedom Loan Fund or find out more about the Nepal Youth Foundation click here.