KGO
SAN FRANCISCO (KGO) -- A mysterious light that shot across the sky Wednesday night was seen across at least four states. It looked like somewhat like a fireball and could be seen from the Bay Area, parts of Nevada, Idaho and Utah.

Some people thought it was a meteor, but according to the National Weather Service in Utah it was simply space junk. A Harvard astronomer says it was a piece of the Cheng Zheng 7 rocket that reentered earth's atmosphere.

U.S. Strategic Command spokeswoman Julie Ziegenhorn wouldn't say if the rocket ever posed danger to people on the ground. She says the command often sees re-entries. Ziegenhorn tells The Associated Press the Chinese CZ-7 rocket re-entered the atmosphere around 11:36 p.m. Central time. That's about the same time social media lit up with reports from Nevada, Utah and California of a small fireball streaking across the sky.

And social media is still buzzing about the object that lit up the sky. Paul Doherty, a scientist at the San Francisco Exploratorium spoke with ABC7 News to try and explain the phenomenon. Doherty said space junk is a real science term.

"Yes, it's a real term. So we launch space craft into space, orbiting satellites and rocket boosters, to get them up there and sometimes they come down," he said. "We were lucky. It was about 50 miles up when it glows and you can see it."

And it turns out scientists were tracking it all. "They were just a minutes off," Doherty said. "They said 9:36 p.m. and it was like 9:40 p.m. when people reported it.

Plenty of people took video and posted it to social media. One thing is clear, people are fascinated by outer space, a testament that there's a little Buzz Lightyear in all of us.

Doherty said all of the social media videos are helpful. They helped scientists triangulate the exact area the space junk flew over.

Livermore resident Bryan Fagundes said he was outside with his friends when he saw the bright light moving fairly slowly across the sky. "From the west sky we saw this shooting star coming across from the east, you figure it will last four seconds, I thought about making a wish, but then it kept going. One of the neatest things I've seen in a while," he said. 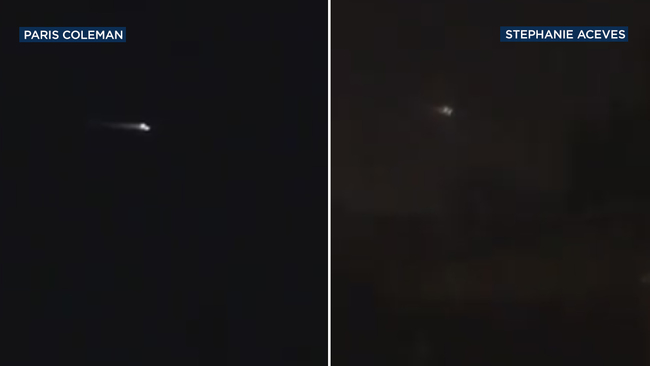