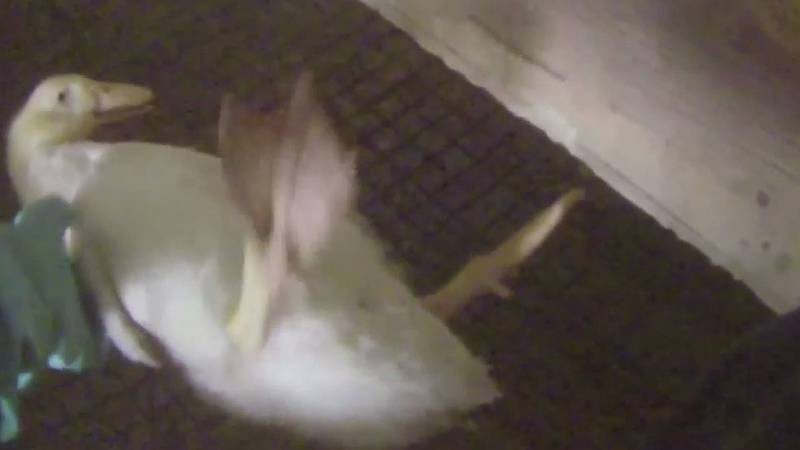 PETALUMA, Calif. (KGO) -- The Sonoma County Sheriff's Department raided a Petaluma duck farm Friday morning to investigate complaints of animal abuse and neglect. The case began after an activist got a job there this summer and brought a hidden camera. She turned over the video to the authorities and to the I-Team.

If you've ordered duck at a local restaurant or seen them hanging in a Chinatown storefront, there's a good chance they came from this farm since it is the biggest in the state.

WARNING: The images in this story may be disturbing for some viewers.

"Are they being harmed and not being taken care of, euthanized unlawfully, stuff like that," Lt. Steve Brown said.

The farm has 200,000 to 300,000 ducks at any given time. The complaints of abuse and neglect come from this undercover activist who worked there for five weeks this summer, power-washing the barns.

"The things I saw were absolutely horrifying, they still haunt me to this day," a Mercy for Animals investigator said.

She tells me the rough treatment starts from the moment the ducklings hatch. Workers toss them by the handfuls and sear off part of their bills. Otherwise, the ducks would cannibalize each other because of the overcrowding.

"And it actually melts the tip of their bills, and they just start squirming around, thrashing, kicking their feet trying desperately to get away from the pain," a Mercy for Animals investigator said.

As they grow, the ducks have difficulty walking on the uneven, wire mesh flooring. They're meant to spend most of their lives on water. The activist estimates she found thousands of injured ducks a day, with malformed feet, others with legs, wings or beaks stuck in the wire mesh, left to starve and slowly die. Some got below the mesh, trapped on the manure pile, without food or water. She says she pointed out the injured and trapped ducks to the farm managers.

"'Oh, it's OK. Don't worry about it.' They told me that repeatedly," Mercy for Animals investigator said.

When workers did take action, they grabbed injured ducks by their necks and spun them, which is not the industry-standard form of a more humane euthanasia. The ducks never have access to water to swim or bathe themselves; they can only drink from a small tube. The first time they dip their heads in water is while they're hung upside down during an electrified bath that paralyzes them before workers slit their throats.

The I-Team spoke with Matt Rice, director of investigations at Mercy for Animals, at their West Hollywood office. He said, "And often times these animals are dumped into scalding hot de-feathering tanks when they're still alive and conscious and able to feel pain, if these types of ways of killing animals were done to cow or pigs or other animals it would be a violation of federal law."

Rice explains that ducks and chickens are not covered by the Federal Humane Slaughter Act. However, the complaint filed by Mercy for Animals argues that state animal cruelty laws should apply. It contains letters from four veterinarians who, based on the video, characterize the conditions at Reichardt Farms as "clearly inhumane", "severe neglect" and "despicable cruelty".

"Even in a factory farm, it is a clear violation of California law to deny animals access to food and water and proper veterinary care and that's what's done to tens of thousands of animals at this facility, and they should be held criminally accountable for it," Rice said.

One veterinarian from Mercy for Animals who was allowed to participate in the raid says it was too short, that they didn't see all the buildings. She also wanted to take four injured ducks who could be helped and re-homed, but she tells me owner John Reichardt refused, ordering his workers to kill the ducks.

Reichardt declined to speak with the I-Team and the state's major poultry trade group did not return our phone calls. The case is now headed to the District Attorney's Office. We'll keep track of it for you.