KGO
By by Cornell Barnard
OAKLAND, Calif. (KGO) -- The FBI is offering a big reward to help solve a cold case homicide in Oakland. In fact, the bureau is now joining forces with the Oakland Police Department to find the killers of 22-year-old Aya Nakano, who was shot to death after a fender bender two years ago.

The sports facility at the UC Berkeley campus, where he played a game of basketball, was the last place that Nakano visited before his murder in 2013. On Thursday, his family said they were encouraged that some new crime fighters are on the unsolved case.

"As a mother, I want nothing more than giving Aya the justice he deserves," said Maria Climaco.

The victim's mother is renewing her plea to help find her son's killer. And now, the FBI is standing with her.

"Our effort to help solve this case is part of a broader FBI strategy and collaboration with the Oakland Police Department with the goal of targeting the most violent crime in the city of Oakland," said FBI Special Agent Bertram Ferries.

The FBI is now offering a $25,000 reward, in addition to the $100,000 already offered by the family. The reward, seen on the FBI's website and a digital billboard on Interstate 880, is for information leading to the arrest of two suspects who shot Nakano the night of June 12, 2013 after a minor fender bender at Stanford Avenue and Market Street in Oakland. A blurry surveillance picture of a silver sedan driven by the suspects remains the only clue.

"This is one of those cases that we continue to talk about that we can't stand for," said Lt. Roland Holmgren. "We have to keep the memory alive."

The victim's friend, Lisa Gonia, added, "He was just one of those people that, you know, no matter what, always had a positive attitude and was always there for you."

The FBI has assisted OPD before with cold cases but now agents will be sharing office space at police headquarters not far from homicide detectives, hoping to solve several thousand dating back to the 1960s. 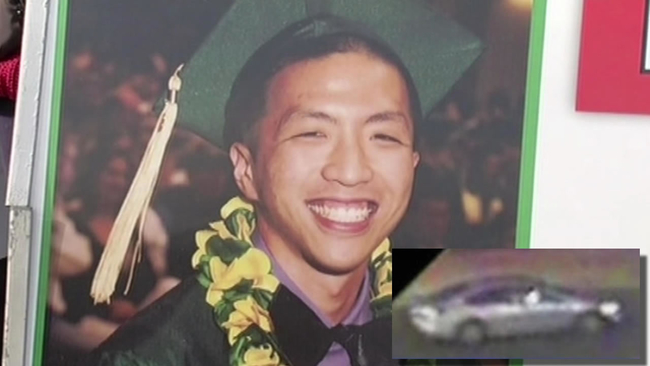