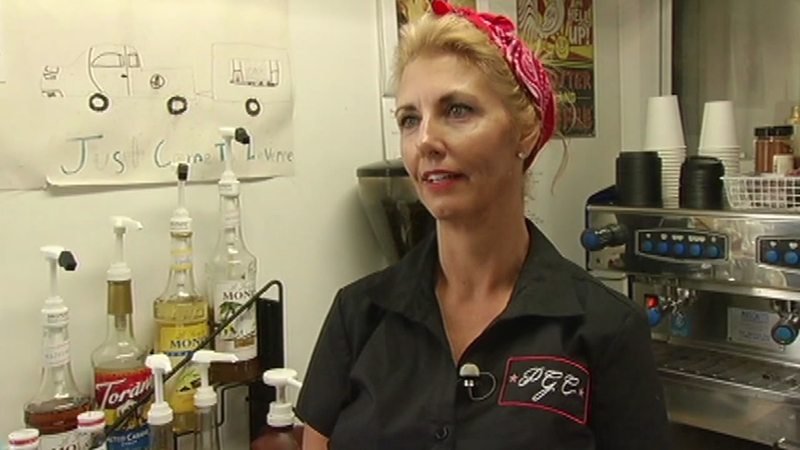 The investigation started in North Carolina, but now there's a Bay Area woman who says she put her life savings into her coffee truck, and is now left with nothing.

At Off the Grid one of the smallest operations is setting up shop, Pinup Girl Coffee Co..

"So, this is our trailer 'Laverne,'" Sebrina Grillo said.

Laverne isn't quite a food truck, rather it's a tiny trailer hitched to a big generator which, incidentally, generates a lot of attention.

"They love it," Grillo said. "They'll say that's a big generator for a little girl like you."

Inside, the baristas do a delicate coffee-making dance to make their signature drink -- the Spicy Senorita.

Grillo explains the drink requires a special blend of ingredients. She told us, "It has a secret mix we use that has some chili, vanilla and cinnamon in it."

With four feet of working space the trailer is a tight fit for Grillo and her employees. "You have one spot to stand and then only your top can [move], and we reach over and under [each other], you know, we make it work," Grillo said.

This is a dream Grillo sacrificed to fund. She gave up her home in Sonoma County and is couch-surfing instead.

Her heart's in this business and she puts one on every cup. "I mean that's the branding, right? That's the stuff people love," Grillo said.

Grillo wanted to upgrade from her trailer to a truck and she thought she found the man to do it, Nic Baliva. He said his business was in Reno, Nevada and he required a $16,000 deposit to retrofit her truck.

"Nic was very charming and knowledgeable and had a lot of ideas," Grillo said.

She mailed the check, but on her way to Reno she got a call.

"We were about a half hour outside of Reno, which is about a four hour drive for us, and he emailed and said he wouldn't be there," she said.

However, Gallos and Laverne aren't alone. They're part of a pattern that has stretched all the way to the other side of the country.

Another ABC station in Raleigh, North Carolina first got the complaints about Baliva in February. James Freeman handed over a $10,300 deposit for a truck, but he says no work was done. Then Craig Powell gave Baliva a $6,500 deposit and he never heard from him. The owners of The Belgian Waffle Truck were out $11,000 for the same reason.

Tara Mortimer is the fourth victim. "My mom passed away a little over a year ago and through her inheritance we were able to go ahead and start to open the business. So we were going to name it after her," Mortimer said.

Her $10,600 was gone. She took Baliva to court. It ordered him to pay her back $10,000. She's still waiting on some of that money. A reporter a sister station WTVD tried to talk to Baliva in Holly Springs in February.

Baliva wouldn't go on camera, but emailed saying he was out of business and intended to repay all of the debts. After that, he opened up shop in Reno and two other people along with Grillo say they paid him, but got no work done.

Grillo has said goodbye to the money she lost. She'd have to litigate in Nevada.

"He probably doesn't have the money sitting in a bank account. I mean, our money is probably gone," she said.

The money Grillo lost amounts to a lot of Spicy Senoritas she will have to make to save up that much.

Grillo has a message for Baliva: "How do you even sleep at night?"

Two of the three business owners mentioned in this story have received some or all of their money back from Baliva. He claims he dissolved his latest company in Reno.