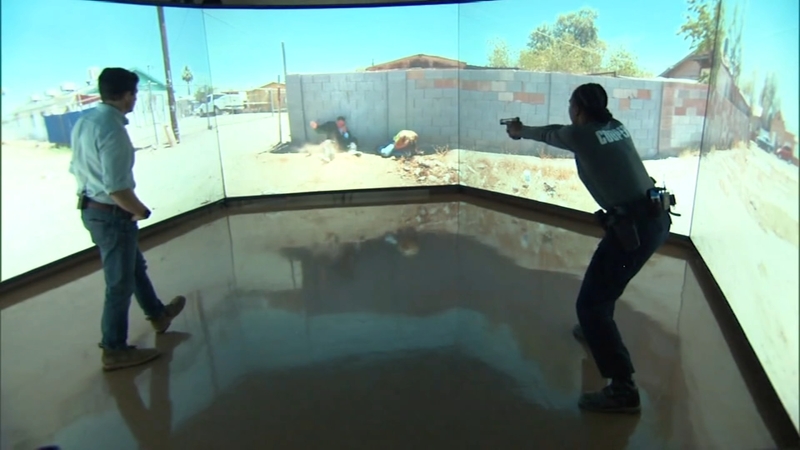 OAKLAND, Calif. (KGO) -- It was the encounter that launched thousands of protests last summer -- a Minneapolis police officer tapping his flashlight on George Floyd's window.

Floyd was compliant, but the officer had already pulled his gun.

This and many other incidents throughout the country show a series of mistakes that Oakland police officer Mia Cooper, just out of the police academy, is being trained to avoid.

In a simulated scenario a man is acting erratically and he has a snapping dog, but Cooper only pulls her weapon after he grabs that machete

RELATED: 'This is just the beginning': Bay Area activists reflect 1 year after murder of George Floyd

When he seems to comply in the simulation, she immediately holsters her gun.

"This is all I know. It's not just go out there and just shoot," Cooper said.

As we reflect back on the murder of George Floyd, we've seen protests, calls to defund the police and cries for change.

The simulator is increasingly being used in police departments across the nation, from Orlando to Oakland

Some of the scenarios, like a mass shooting at a theater, seem jarringly real.
In Oakland, especially in light of increasing tension with police, the focus is on using it to mend frayed relations with the community.

"It's actually made me open my eyes more because I was somebody that villainized officers," Cooper said. "So now it's my duty to also explain that to others me that don't understand what law enforcement is about."

The department also has a directive from the very top.

"How can both people leave that interaction safely, how can we both live through this experience and make sure that nobody gets hurt? That's our objective," said Oakland Police Chief LeRonne Armstrong.

A situation can shift if de-escalation tactics are not used - a gun drawn in an instant.

Still Chief Armstrong says that his top priority in Oakland, despite a massive uptick in violent crime, is rebuilding trust with the community and de-escalating potentially fatal encounters.