It's officially "One Shining Moment" time for the Kansas Jayhawks who beat the North Carolina Tar Heels 72-69.
ESPN
By Tory Barron 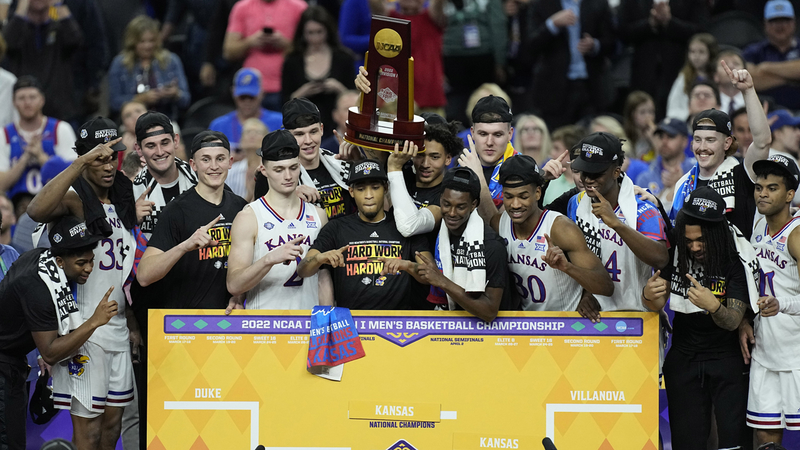 Countless upsets and busted brackets later, the 2022 NCAA men's basketball tournament is over.

It's officially "One Shining Moment" time for the Kansas Jayhawks who beat the North Carolina Tar Heels 72-69 in Monday's national championship game in New Orleans.

The Jayhawks scored the first seven points of the game before the Heels took off. In a six-minute stretch to end the first half, UNC rattled off 16 unanswered points. It was just the third time this season that Kansas has trailed by double figures. UNC'sArmando Bacot, who entered the matchup with an injured ankle, refused to be deterred. He had 12 points and 10 rebounds in the first half.

The second half? That was an entirely different story as Kansas came back with a vengeance. The Jayhawks, who trailed by 15 at halftime, went on a 31-10 run in the first 10 minutes of the second half. David McCormack came up clutch for Kansas with 15 points and 10 rebounds.

UNC's Bacot finished the night with 15 points and 15 rebounds before re-injuring his ankle in the final minute while going for what would've been a potential game-winning layup attempt. He was unable to return to the game.

KU's comeback win puts them in rare (read: non-existent) company. Kansas is the first team in Final Four history to overcome a 15-point halftime deficit to win the title game. According to ESPN Stats & Information data, teams down 15+ points at halftime are now 9-452 (.980) in NCAA tournament history.

Here's how social media celebrated -- and lamented -- the outcome of the blue blood battle:

HAS A NICE RING TO IT 😁 pic.twitter.com/GR27MoPIpi

Let’s not start that UNC gave the game away mess… Kansas went and got that game! They went got that one out the MUD. Carry the hell on…

Left it all out there in both games.

Much respect for Bacot.

The ULTIMATE celebration. And you guys have been doing a lot of celebrating 😂

Love what this @UNC_Basketball team was able to accomplish this season 🙏🏾 y’all made the #CarolinaFamily proud!

Forever happy to be a tarheel good fight fellas

Not the way we wanted to go out, but best believe we’ll be back.