Drake's Beach is partially closed because of all the animals, but that isn't stopping people from getting as close as they can to see them.

On the Point Reyes National Seashore, love is in the air.

"Next on The Bachelor...." "The most tumultuous rose ceremony, ever" Okay. Gonna's stop. #abc7now pic.twitter.com/ulpvOBSv6x

Its lovely music bellows forth in guttural utterances that sound as if they emanate from voice boxes buried deep inside urban sewers.

Now, multiply that sound by some 2,400 elephant seals along the Point Reyes National Seashore. The National Park Service says this is a record year for the species that humans hunted nearly to extinction in the mid-1800's.

"They are protected by the National Marine Mammal Protection Act," said John Dell'Osso, the seashore's chief interpreter. That is one reason why you will see closed signs posted along Drakes Beach."

Nature must have its way. The females give birth, then join harems, awaiting their next, 15-foot long, 5,000-pound, large Lothario.

"One alpha could have up to 50 females," said Sarah Codde, a National Park Service researcher.

These elephant seals and their pups are having fun in the sun on Friday.

For a male, that definitely seems worth fighting for.

The closure is likely to continue until mid-March. And yet, Drakes Beach attracted plenty of interested humans, Friday. "I mean, who gets this close to elephant seals? Jacques Cousteau, right?" asked Ari Mathos from Wisconsin.

He has a point, especially when elephant seals do not read "closed" signs. Two of the creatures took up residence near people Friday afternoon. Don't tempt them.

"They can move incredibly fast on the beach, itself," said Dell'Osso.

The beach is closed, but some of the 5-thousand pound creatures do not read the signs. And, they flip sand on themselves for sunscreen. #abc7now pic.twitter.com/TsZ5ib7lee

"Faster than humans?" I asked.

"Faster than many," he said.

"What would happen if an elephant seal caught a human?"

We should be grateful that at this time of year, they're interested in their own kind.

5000 pounds and fifteen feet of love. "Come and get me, ladies." #abc7now Quite the sight at Drake's Beach in #marin County pic.twitter.com/colJgy7Tc1 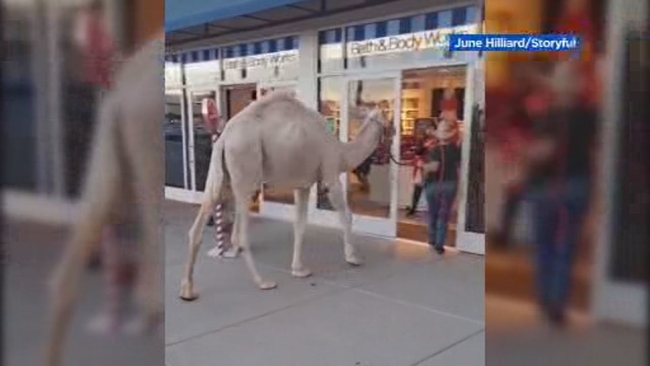