KGO
By David Louie
MILPITAS, Calif. (KGO) -- A unique program is saving the lives of feral shelter cats that are not good candidates for adoption. Instead of being euthanized, they're gently coaxed to trust humans and to become loving house or yard pets.

Lorrie Sprain works in administration at the Humane Society of Silicon Valley. But she focuses a lot of her attention in a garden just a few feet away.

RELATED: This is the perfect job if you love cats

Gigi and Bebe moved into this cage Monday night. They're sisters from the same litter, about 10 weeks old, and very shy.

Lorrie will spend the next week or so speaking softly to them to build their trust. You might call her a cat whisperer.

There are two other feral cats hiding in the garden -- one seeking safety and solitude in a box. We couldn't find the other one, but it's here somewhere.

"You have to have patience, and you can get them to come out and eventually you can pet them," said Lorrie. "You can sit in the chair and pet them. We had a few that we coaxed into our VP of HR's office, and the cat got so comfortable, he would sit in her chair."

It's a process that can take a month.

The local population of feral cats is at least 125,000 and probably higher. This unique program has led to 260 adoptions.

"A feral cat coming into a shelter is actually a death sentence because there aren't alternatives in some cases for those animals," said Carol Novello, president of the Humane Society of Silicon Valley. "So we wanted to come up with an alternative so that those animals were given the second chance that they deserve."

The Humane Society program also works with so-called "fakers" -- cats that were formerly domesticated but decided to join feral colonies to take advantage of food left out by cat lovers. In some cases, they were abandoned pets or their offspring. They also could be lost cats.

The community cat garden has been so successful, the Humane Society of Silicon Valley has gotten additional funding to expand it from a current capacity of about 12 to 24.

A gallery of photos of formerly feral cats that have been adopted provides proof of success. Those that warm up to humans become great house cats. Others will be fine outdoors, but will allow adoptive families to care for them and supplement their diet.
Report a correction or typo
Related topics:
pets & animalsmilpitasanimal rescuecatsanimal newsanimalspet adoption
Copyright © 2020 KGO-TV. All Rights Reserved.
PET ADOPTION 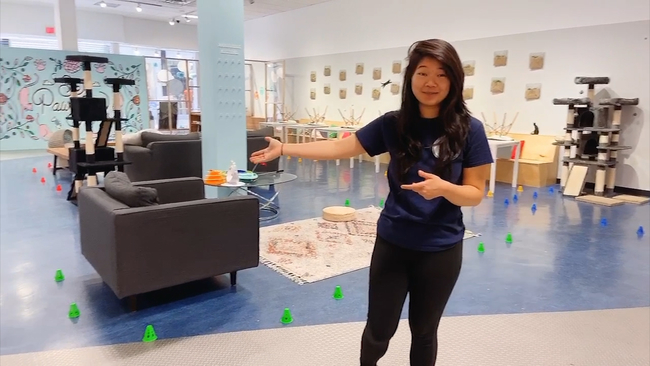 I adopted a cat during the coronavirus pandemic