'We would all be dead': Bay Area BLM organizers point to race double standard in Capitol riot 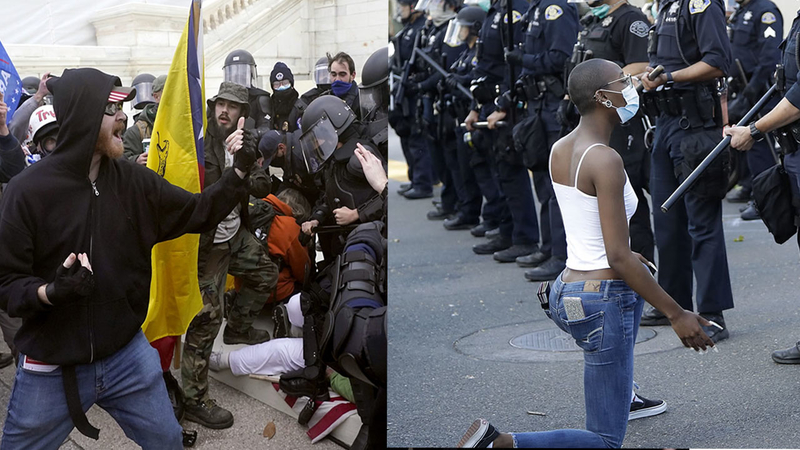 SAN FRANCISCO (KGO) -- One of the loudest conversations coming out of Wednesday's Capitol siege -- the lack of force used against rioters, even as they scaled walls, broke windows and destroyed offices. Activists at last year's Black Lives Matter rallies in the Bay Area say they witnessed a much different reality on the ground at their protests.

Video footage showed the early moments when rioters broke down gates surrounding the Capitol. Punches were thrown between police officers. There's a brief scuffle but that's where the police confrontation with protestors ended in the moments before the Capitol was breached.

Cayla Sanderlin remembers a very different outcome when her husband Derrick was shot in the groin with a rubber bullet, last May at a Black Lives Matter rally in San Jose.

Former FBI Agent Rick Smith tells ABC7 News, "there should have been better planning. It was allowed to get out of hand."

"My husband was 30 feet away from the line of officers and was holding a sign that said, we are worthy of life and was not inciting any violence at all, and he was shot," she said, "That makes me angry. None of those men and women but mostly men, White men who have stormed the Capitol have been shot."

Tiana Day organized a Black Lives Matter rally over the Golden Gate Bridge. While her protest was peaceful many of her friends had a different experience.

"I have friends that I organize with who got tear gassed, who got hit with rubber bullets, who got arrested, and are possibly facing sentences because of their peaceful protests, " Day said.

Xavier Brown organized peaceful demonstrations in Oakland last year. He doesn't mince words about what might have happened if Black Lives Matter protestors stormed the Capitol.

"We would all be dead. It would be a spray of bullets," said Day.

Sanderlin, Brown and Day all say watching the images out of Washington, D.C. have been retraumatizing but also a validation of what they've experienced first hand -- an ugly double standard embedded deep in this country.