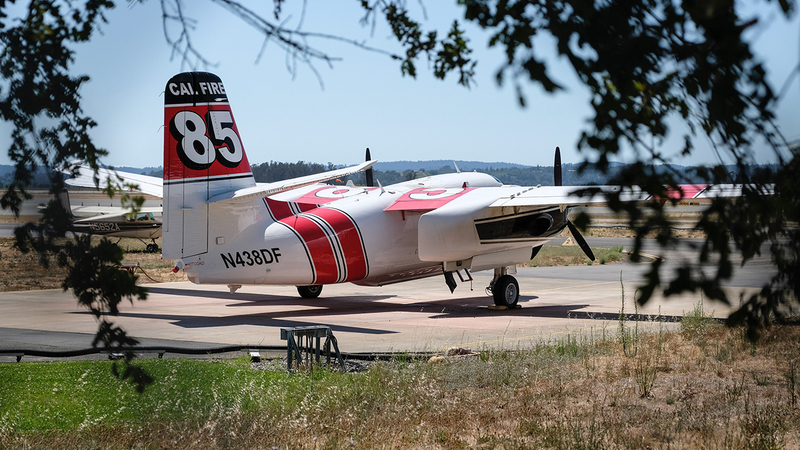 SONOMA COUNTY, Calif. (KGO) -- We all know wildfires have been getting bigger and more intense each year-- Cal Fire has said one of their biggest challenges has been a lack of equipment. On Thursday, Governor Newsom and former Governor Arnold Schwarzenegger said that is about to change.

This is good news for Northern Californians. If firefighter Bob Vallette doesn't have his boots on, then he is not flying his plane, and the nearby region is not burning. #abc7now @CALFIRE_PIO Cal announced help today. A billion dollars in new equipment and manpower. #abc7now pic.twitter.com/qfixZc6h9d

They had a quiet morning at the Cal Fire Air Attack Base in Sonoma County, though there is no such thing as a day that's too quiet.

Aboard his S-2 tanker, if Bob Valette's flying boots remain untouched, then it's good for the region.

"They've been sitting there all day, today," he said.

That would be perfect timing on an afternoon when Cal Fire made its own headlines at McClellan Airbase near Sacramento. Governor Newsom invited former Governor Schwarzenegger as he announced a billion-dollar investment to fight wildfires.

The upgrade includes new Blackhawk helicopters that can fly at night, plus seven converted C-130's that should all be flying within four years.

The smaller planes @CalFire uses will have larger back-up from a fleet of seven C-130's, plus Blackhawk helicopters that can fly at night. A C-130 can drop 4 times as much fire retardant as one of these stalwarts. #abc7now pic.twitter.com/UvLVkIbkX1

"When you have fires people want to see something in the air. If they don't, they aren't sure anything is happening," said Governor Newsom.

The C-130's have been reliable workhorses for the military for decades. They have four engines and will provide a combination of nimbleness and speed. The C-130's will drop four times as much retardant as one of the smaller, mainstay tankers, and can follow an initial attack.
"There comes the C-130 behind us. And you go pow, pow with the two S-2's and boom with the plane behind it," said Valette, who has been fighting fires from the air for approaching half a century.

They know the fires will be coming, inevitably. This season has had a relatively slow start, but they know what's ahead.

Worth noting. Bob Valette is an aerial firefighting legend. He's 78 years old and has been doing this work for almost half a century. #abc7now @CalFireNews @CalFire_Pio pic.twitter.com/K96XgGRqe2

"September, October for sure. Hopefully a quiet August," said Welch.