Newsom makes stop in SF on eve of midterm elections

KGO
By Kate Larsen
SAN FRANCISCO (KGO) -- Even though poll numbers are on Lieutenant Governor Gavin Newsom's side history may not be-- if Newsom wins, a Democrat will succeed a Democrat for the first time since 1886.

In his run for Governor, Newsom's final election eve stop was at 'The Chapel,' in San Francisco's Mission District-- the city where Newsom was born and served as mayor for six years. He spent much of the evening talking about immigration and discussing the caravan of Central Americans, which has become a divisive campaign issue across the country.

"To absorb a few thousand refugees in a nation of hundreds of millions of people. Just consider what this state has done. In the last 15 years, this is a state that's brought in 112,000 refugees."

Newsom's opponent, Republican Gubernatorial candidate, John Cox, was in Berkeley and Sacramento Monday encouraging supporters to go to the polls. He also spoke about immigration and said that he agrees with President Trump, that the border needs to be protected.

"I won't hesitate to say something if the President does something I don't think is right," said Cox. "I happen to agree that we gotta make sure we know who is coming into the country."

But Cox also said he does not want to "disturb people" already working in California.

"I want to have a guest worker program, but I want to get rid of criminals out of this state that would threaten us and so I'll take a backseat to no one in making sure that this state has to be secure and safe."

At Monday night's event, Governor Brown made a joke about Newsom running for president in eight years and the crowd exploded into cheers, as did Newsom's wife.

Cox actually criticized Newsom Monday for having presidential ambitions, saying that he, John Cox, wants to fix California and that being governor is not just a rung on the ladder for him. 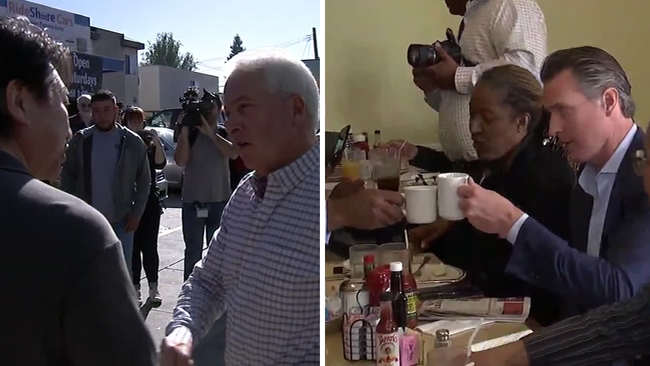