Republicans prepare for debate ahead of New Hampshire primary 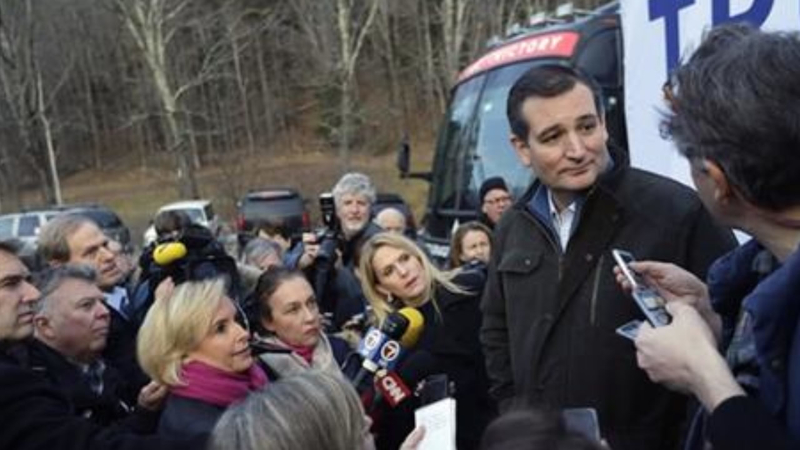 Republicans prepare for debate ahead of New Hampshire primary

CONCORD, New Hampshire -- Jeb Bush says that Donald Trump's rhetoric is insulting and hurtful to all Americans, including his Mexican-American family.

Bush's wife was born in Mexico and he speaks fluent Spanish. He said at a crowded town hall meeting Friday in Concord, New Hampshire, that Trump's words and tone reflect the billionaire businessman's "deep insecurities."

Bush says he rejects Trump's disparaging language against Mexicans, Muslims, the disabled and others. He says the language is insulting and hurtful.

Trump is the front-runner ahead of Tuesday's New Hampshire primary. He is holding a rally in South Carolina after canceling a town hall event in New Hampshire due to bad weather.

The Latest from the 2016 campaign trail with days to go until the New Hampshire primary (all times local):
7:35 p.m.

Rubio campaign adviser Todd Harris confirmed the endorsement on Friday. It's the second from a former GOP presidential candidate for Rubio this week.

Rubio is trying to seize on a better-than-expected third-place finish in Monday's Iowa caucuses as he sprints across New Hampshire ahead of Tuesday's first-in-the-nation primary.

Rubio was addressing an audience of more than 700 before the confirmation that Jindal had offered his support.

Jindal was a candidate for the GOP presidential nomination from last June until November.

Donald Trump is holding a rally in South Carolina after canceling a town hall event in New Hampshire due to bad weather.

Some supporters lined up hours before doors opened at 5 p.m. at a 10,000-seat arena in Florence.

Alan Jackson, of nearby Hartsville, says Trump is all about changing the future of the country.

The 37-year-old carpenter says the country needs a change and that he thinks Trump is the only one who will actually make a difference.

Republican presidential candidate Gov. Chris Christie says he would go to a fellow New Jersey native for advice on nominations to the Supreme Court.

Alito and Christie have both previously served as U.S. attorney in New Jersey. Both were born and raised in the state.

Christie says he'd invite Alito to the White House and ask for five suggestions of circuit court judges who have a history of writing decisions similar to his own.

Christie says he wants someone with a paper trail.

Hillary Clinton is launching her first TV and radio ads in Spanish aimed at voters in this month's Democratic caucuses in Nevada.

A narrator says in the TV ad that Clinton has stood with Hispanics on immigration and fought to expand access to health care and college. The radio version encourages supporters to sign up via text message for information about the caucuses.

Clinton is counting on heavy support from Hispanics, blacks and other minorities to help her defeat Bernie Sanders in the Democratic primary.

Clinton's campaign says the ads will run in Hispanic media outlets in Nevada. Hispanic voters make up a significant portion of the Democratic electorate there. The state holds its Democratic caucuses on Feb. 20

Add former Pennsylvania Gov. Tom Ridge to the roster of top Republicans to join Jeb Bush on the campaign trail in the waning days of the New Hampshire primary.

Ridge served as the country's first Homeland Department secretary under President George W. Bush and said Friday at a town hall in Concord that Jeb Bush has all the ingredients to be president.

He says Bush "thinks about solving problems all the time" and governs with "an open heart."

Sen. Lindsey Graham, who endorsed Bush after dropping out of the presidential race, is also campaigning with the former Florida governor. He says New Hampshire voters have a chance to "restart this race."

Jeb Bush's campaign is releasing a TV ad using a Rick Santorum interview to call out their claim that rival Marco Rubio has done nothing as a senator to prepare him for the White House.

The 60-second spot is set to run Saturday in New Hampshire and features Santorum being stumped in an interview on MSNBC's "Morning Joe" when asked to list Rubio's accomplishments in the Senate. Santorum endorsed Rubio after dropping out of the presidential race earlier this week.

A former head of the NAACP has endorsed Bernie Sanders for president.

Ben Jealous announced his support on a conference call with the Vermont senator Friday and says he intends to be very engaged with the campaign.

Jealous was the group's youngest leader when he was hired as its president at age 35 in 2008. He served through 2013 and now works for Kapor Capital. The west coast venture capital investment firm backs information technology startups committed to making a positive social impact.

Sanders says the endorsement is a tremendous boost for his campaign, which is leading the polls going into Tuesday's New Hampshire primary.

He lags former Secretary of State Hillary Clinton in support among black voters, but expressed optimism that would grow. He predicted "huge progress" in South Carolina, which votes Feb. 27.

Jeb Bush was once believed to be a virtual shoo-in for the Republican nomination in a crowded field of political newcomers and outsiders.

But going into the second presidential contest in New Hampshire next week, he's doing anything he can to keep his flagging campaign on the rails.

He's begging some for votes and bear-hugging others who say they'll consider it. This week, he whispered "please clap" after delivering a commanding speech about leadership. That phrase has since gone viral on social media.

But Bush is ultimately banking on his experience as a businessman and former Florida governor to convince voters that he's best suited for the Oval Office. He argues that the three top finishers in the Iowa caucuses -Ted Cruz, Donald Trump and Marco Rubio - aren't up to the job.

Just one week into primary voting, Democrats are preparing for a long and expensive head-to-head battle between Hillary Clinton and Bernie Sanders that could go deep into the spring or even beyond.

Clinton and Sanders are both flush with campaign cash. Clinton has overwhelming support among Democratic Party leaders, but Sanders foresees staying competitive by drawing new and younger voters into the primary process. And while Clinton is seen as having an advantage in the delegate-rich states that vote in March, Sanders' campaign is also mapping out plans to stay within reach during that all-important stretch.

More than half of the delegates up for grabs in the Democratic race are on the table in March, with a heavy concentration on the first of the month.

Ted Cruz has mapped out a path to the White House that all but ignores the explosion of minority voters in America.

The Texas senator's general election strategy depends almost wholly upon maximizing turnout among millions of conservative white voters - namely evangelical Christians and the white working class who didn't vote in 2012. Cruz's team also is banking on a sharp decline in black and Hispanic support for the 2016 Democratic nominee.

Longtime Cruz aide Jason Johnson says he knows this thinking makes him an "outlier." Conventional wisdom in both parties says the GOP must appeal to political moderates and non-white voters who are becoming a greater share of the voting-age population. But Johnson points to the some 2 million white voters who sat out the last election.

Democratic presidential candidate Bernie Sanders may be getting an up-and-close look at the man who portrays him on television: comedian Larry David.

Sanders is taking a short break from the campaign trail in New Hampshire and planning to be in New York on Saturday night. Senior adviser Tad Devine says Sanders is likely to appear on NBC's "Saturday Night Live," where David will be the host this weekend.

Devine says the details were not yet finalized but "it looks like it's going to happen."

NBC declined comment on whether Sanders would appear on the show.

David has spoofed the Vermont senator as a passionate presidential candidate screaming of revolution and Sanders has happily played along. During a CNN forum this past week, Sanders was asked if he does a Larry David imitation. The senator replied, "I am Larry David."

Baker said that while he and Christie don't see eye to eye on every issue, the New Jersey governor has shown a proven ability to work across the political aisle.

Baker, who has tried to steer clear of national politics, said he was moved to endorse Christie in part because he didn't feel either of the two top Republican candidates coming out of the Iowa caucuses - Donald Trump and Ted Cruz - had that ability to forge a consensus.

Baker said he and Republican Lt. Gov. Karyn Polito will attend a campaign event for Christie in New Hampshire on Saturday. Christie has lagged behind other candidates in recent New Hampshire polls.

Ohio Gov. John Kasich says he has more credibility than "someone who's never done squat."

A voter at a community center in Hollis asked Kasich how he could replicate and scale up his successes in Ohio if he becomes president. Kasich told him his achievements aren't limited to Ohio, he was successful in Washington as well as a congressman. Without naming any of his rivals, he said, "I think I have more credibility than someone who's never done squat."

Kasich also was questioned by a man who drove from Maryland to see Kasich and other candidates.

"You're not even from New Hampshire! Wait your time!" Kasich told him.

A top New Hampshire official for the Republican National Committee is blasting ABC's decision to exclude Carly Fiorina from Saturday's debate in the first primary state.

Steve Duprey, who leads the RNC's debate committee, says Fiorina deserves to be on the stage because she has campaigned vigorously in the state. Duprey writes on his Facebook page that he's spoken with ABC and Fiorina's campaign, but ultimately does not have control over who the network puts on the debate stage.

Fiorina has campaigned vigorously in New Hampshire and is well liked by many GOP voters here. At a recent gathering in Nashua put on by the state party, she was the only candidate to receive a standing ovation following her remarks.

The New Jersey governor, who has campaigned aggressively in New Hampshire, says voters should be wary of the three candidates because they have not spent as much time campaigning here.

New Hampshire voters are staunchly protective of the state's status as home of the first presidential primary.

Christie says, "if you reward those folks who don't show up here there is no reason for New Hampshire to be first."

Republican presidential contender Carly Fiorina is lashing out over a decision to exclude her from Saturday's ABC GOP debate.

Fiorina has appeared in previous undercard debates in recent weeks, but since Monday's Iowa caucuses, many of those with whom she'd shared the stage have suspended their campaigns.

Fiorina has not been invited to the main stage debate, a move she says is rooted in the idea that "establishment candidates...are afraid to debate me."

"The game is rigged," Fiorina wrote in a blog post on Medium.com, blaming ABC News and the Republican National Committee for the decision.

Williams, also a military veteran, said in an op-ed posted online Thursday night that he sees the Ohio governor as the right candidate to be "responsible enough to command the world's most powerful military" and that he is the "the best choice to root out corruption at the Veterans Administration."

Williams also says Kasich can "rise above the din of toxicity infecting our national dialogue" and appeal to a wide array of voters within what he sees as a divided Republican Party, which he sees as "in trouble."