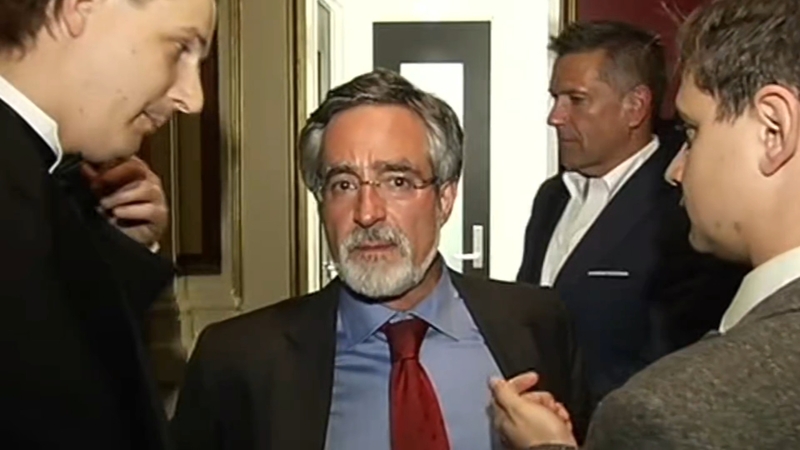 SAN FRANCISCO (KGO) -- San Francisco Supervisor Aaron Peskin confirmed Thursday that he is entering an alcohol treatment program after questions were recently raised about his conduct at City Hall.

On Wednesday, there was a contentious exchange between Peskin and San Francisco Park and Recreation general manager Phil Ginsburg during a virtual Board of Supervisors meeting.

Via Zoom, Peskin can be heard saying, "Mr. Ginsburg, not with a lot of respect, but if you could wipe that smirk off your face that would help these proceedings."

District 10 Supervisor, Shamann Walton then said, "Supervisor Peskin, if we could try to be a little more civil." To which, Peskin replied, "Oh no, no - that was civil."

The long-time politician released a statement, which says in part: "I stand by my long legislative and civic record but must also take full responsibility for the tenor that I have struck in my public relationships - for that, I am truly sorry."

While in North Beach, which is Peskin's district, Mayor London Breed refused to call the supervisor out by name, saying, "I'm not going to focus on one particular supervisor. It's clear from his statement, he needs help."

Mayor Breed went on to share, that it's not just Peskin.

"This is not new, it's been going on for years and it's a pattern of members of the board and how they treat people who serve this city," said Breed.

Kate Larsen: "Is something changing in City Hall where this pattern of behavior is no longer tolerated?"

Mayor London Breed: "I hope so because this is not new, people's lives and careers have been destroyed."

"To be disrespected by people who are elected officials is unacceptable regardless of their personal struggles," said Breed.

Former Mayor Willie Brown defended Peskin, who has spent 14 years on the board of supervisors.

"He is one of the best, most qualified, competent elected officials we have in San Francisco. And I don't understand why people in this town are concerned about somebody having a drink," said Brown.

Longtime San Francisco and North Beach residents, who know Peskin, were not surprised or especially offended by the news.

"Aaron's a good guy," said Timothy Doyle. "I think people are on pins and needles with the political correct stuff these days."

"I think he works really hard for the city and he's a real North Beach guy and I think if he's had a couple of cocktails, that's very normal in North Beach," said Flicka McGurrin, who owns several restaurants and bars in San Francisco.

ABC7 Insider Phil Matier says a lot of people weren't too happy about the exchange between Supervisor Peskin and Ginsburg.

"He's been both a thorn in the side and an ally to everybody from Willie Brown to Gavin Newsom, Ed Lee, and most recently, London Breed. But he also has a history of being abusive to staff and department heads and a history of drinking," said Matier, who also said that Peskin is known for this type of behavior.

San Francisco Supervisor Aaron Peskin confirmed Thursday that he is entering an alcohol treatment program after questions were recently raised about his conduct at City Hall.

"Aaron Peskin didn't get where he is now by being overly nice to people. He's not your glad handing politician. He fights for his district, he fights department heads, and if he's got a couple under his belt, he gets pretty lippy about it," said Matier.

In 2018, there was a fire in North Beach where Matier says there were allegations that Peskin had been drinking and telling the fire department how to handle the blaze.

"Then Chief Joanne Hayes-White was upset with Peskin saying that he had been belligerent as well," said Matier.

ABC7 news reporter, Kate Larsen, spoke to Hayes-White Thursday about Peskin. She said, "I fully acknowledge it was a difficult encounter on March 17 at that fire. He interfered at an emergency scene and crossed the line. His conduct towards me and members of the fire department was inappropriate that night, but he acknowledged that and made a personal apology to me.Having said that, he's a passionate guy and cares deeply about the City and district that he serves. I wish him the best in his efforts to become healthy."

Supervisor Peskin indicated that he will continue working while seeking alcohol treatment.

"I can say that while it's understandable that elected officials want to question city staff about important policies, it must be done in a way that doesn't create a hostile work environment. There have been too many cases of city staff feeling disrespected, berated, and harassed for too long. The Mayor will not tolerate a work environment where department heads and staff don't feel like they can do their jobs, and she has asked the City Attorney and Department of Human Resources for ways to handle these issues when they occur."
Report a correction or typo
Related topics:
politicssan franciscosan francisco city halllondon breedsan francisco board of supervisorspoliticsalcohol
Copyright © 2021 KGO-TV. All Rights Reserved.
TOP STORIES
1 dead, 5 injured in shooting at Lake Merritt, police say
Bay Area celebrates Juneteenth as national holiday for 1st time
Power restored to over 50K customers in East Bay, PG&E says
Residents describe terrifying escape from SF apartment fire
2 killed in early morning shootings in SF
CA launches electronic vaccine verification
New online vaccine record not working? Here's how to fix it
Show More
Biden family dog Champ dies
Prominent activists, allies consider what 'Black Freedom' looks like
Newsom assaulted by 'aggressive' man on CA street
Buyers lining up to check out 'house from hell' listed for nearly $600K
How Santa Clara Co. became 1st in state to recognize Juneteenth
More TOP STORIES News