WABC
By Eyewitness News
Suspicious devices resembling pipe bombs were sent to the homes of the Clintons and the Obamas, as well as CNN headquarters in New York City Wednesday.

Authorities say a potentially workable explosive device was found at a facility near the Chappaqua home of former President Bill Clinton and former Secretary of State Hillary Clinton.

It was discovered sometime after 1 a.m. by those who check the Clintons' mail and was addressed to former First Lady Hillary Clinton, who is currently in Coral Gables, Florida, for a fundraiser.

She discussed the incidents, saying she is OK and thanking the Secret Service for their work.

"Many of you and many others across our country have asked after me and my family, and I'm very grateful for that," she said. "We are fine, thanks to the men and women of the Secret Service who intercepted the package addressed to us long before it made its way to our home. Every day, we are grateful for their service and commitment."
EMBED More News Videos

Hillary Clinton addresses the news of suspicious packages sent to her home, the Obamas and CNN.

Former President Clinton was at home at the time the package was found, according to a source familiar with the situation who stressed that the package was screened and discovered away from the residence and was never close to Clinton.

Later Wednesday morning, a suspicious package was also discovered at former President Barack Obama's home in Washington, DC. That one was addressed to the former president.

Then, at 9:38 a.m., a CNN mailroom employee called 911 from the Time Warner Center in Columbus Circle to report a suspicious package. The NYPD bomb squad responded and evacuated the building.

The object appears to be a small pipe bomb with wires extending from it, addressed to former CIA Director John Brennan. It was removed from the building at 11:37 a.m. and taken to a remote location to be detonated.

The NYPD said that in addition to the explosive device, an envelope containing white powder was also discovered at the Time Warner Center. Mayor Bill de Blasio called it an act of terrorism.

"What we saw here today was an effort to terrorize," he said. "This clearly is an act of terror, attempting to undermine our free press and leaders of this country through acts of violence. I want to make very clear that the people of New York City will not be intimidated, that we are going to go about our lives undeterred because the very concept of terrorism to change us, and we will not allow that to happen."

Authorities say the devices are all consistent with the one found earlier this week in the mailbox of philanthropist and billionaire George Soros, who also lives in Westchester County.
EMBED More News Videos

Tim Fleischer reports on the suspicious device found at billionaire financier George Soros' home, and if it has any connection to Wednesday's incidents.

There were no explosions and no reports of any injuries.

Suspicious packages were also sent to New York Governor Andrew Cuomo's New York City office, California Congresswoman Maxine Waters, and former Attorney General Eric Holder. The package meant for Holder never made it to its destination due to a delivery error and was bounced back to the return address, listed as Rep. Debbie Wasserman Schultz's office in Sunrise, Florida, which was briefly evacuated.

At this point, it does not appear any of the suspicious packages included pipe bombs. The package at Cuomo's office was confirmed to be a flash drive from the far-right group The Proud Boys.

The White House quickly condemned the attacks aimed at Democrats and perceived foes of the administration.

"Acts or threats of political violence have no place in the United States," President Donald Trump said. "This egregious conduct is abhorrent."

Trump said he received a briefing from federal officials on what he called "despicable acts." He promised "a major federal investigation" and urged the nation to unify.

"We're extremely angry, upset, unhappy about what we witnessed this morning and we will get to the bottom of it," he said. "That's a very bipartisan statement." 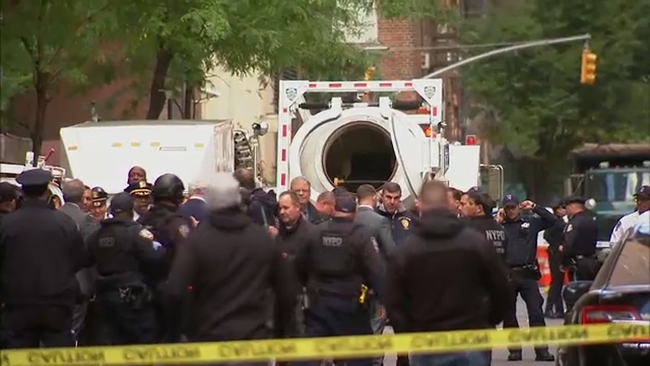