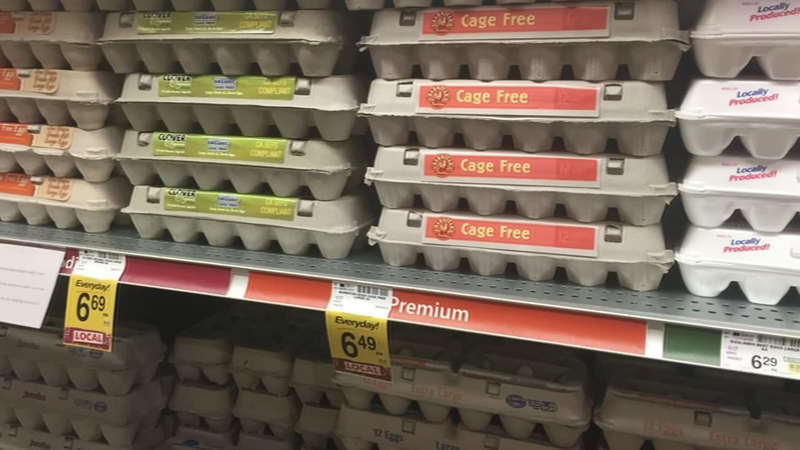 SAN FRANCISCO (KGO) -- Consumers are shelling out more for a carton of large eggs as benchmark prices in California have gone up by 150 percent in a year.

Last August, a dozen large eggs cost $1.45 and a year later the price is $3.61 for the same carton, according to information from the U.S. Department of Agriculture.

It's Tops Coffee Shop has been around since 1935 and is recognized as a great breakfast place serving a lot of eggs all day long.

Sheila Chapman's brother does the shopping for the restaurant. "He was white as a ghost. He finally got it out and said, oh my God, the price of eggs has doubled,'" she said.

So they had to raise their prices because of the sticker shock. A dozen eggs cost $6.49 at Safeway and Real Food Company is selling the cheapest cartons at $3.19. The pasture raised, free range variety are going for at least $9. "The price of feed has gone up or sometimes there have been like large die offs of chicken because of disease things like that," Real Food Company General Manager Steve Schenck said.

But you can still find bargains if you look around. At Trader Joe's, one man found a carton for only $1.99. Other shoppers like Karen Diggs don't mind paying higher prices. "We're protecting the land, the animals and giving the farmers support of living, she said.

The San Francisco Chronicle reported Monday that one reason for the jump was an avian flu outbreak this spring that resulted in the killing of 48 million domestic chickens and turkeys, mostly in the Midwest.

In addition, California producers have to pay 20 cents more per dozen eggs for chicken feed because it's mostly shipped from the Midwest, said Ken Klippen, president of the National Association of Egg Farmers.

The rollout of Proposition 2, which requires that all eggs sold in California come from farms that allow chickens to move around freely, has also caused prices to soar, the newspaper reported.

Under the measure, each egg-laying hen must have 116 square inches of space, rather than the standard 67 inches of space in battery cages, resulting in the upgrading of farms and fewer hens overall. "The costs of having to build new structures and new facilities were incurred by the egg farmers, and those costs have to get passed along," said John Segale, spokesman for the Association of California Egg Farmers.

California farmers produce roughly one-third to one-half of the eggs eaten in the state. Some larger farms in Iowa that raise hens according to Prop. 2 specifications for California have been shut down since the avian flu outbreak, said Klippen.

There is one bright spot for California's egg industry: Farmers who produce pasture-raised eggs have seen an increase in business, now that their $9 eggs no longer seem so expensive.

California produced 18 percent fewer eggs between May 2014 and May 2015, according to USDA statistics.