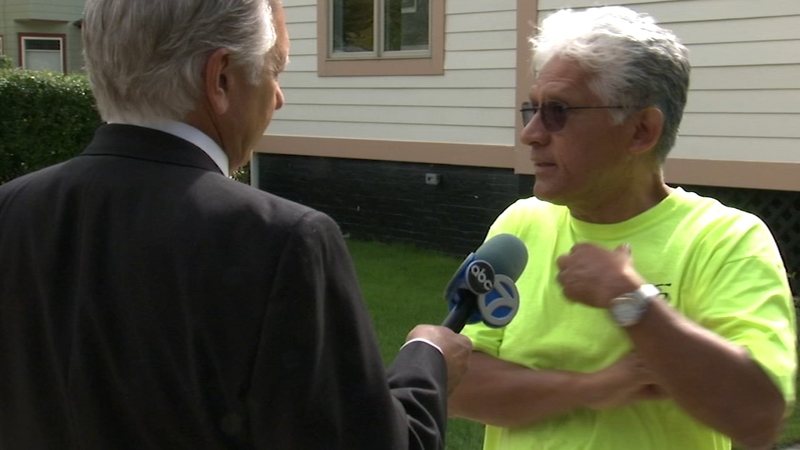 CHICAGO -- An I-Team investigation has uncovered that a former priest, who church officials say was credibly accused of sexual abuse of a minor, worked as a school counselor after leaving Chicago.

Jesus 'Jesse' Garza left his priest position at the Archdiocese of Chicago in 2000 and went to work in Beloit, Wisconsin, public schools. Garza claims school district or state officials never questioned him about his background even though in July of 2005 church investigators say they substantiated claims that Garza forced a boy to perform oral sex on him between 10 and 15 times from January to April 1984.

"The people I worked with in Beloit knew I was a priest, they would joke with me about it," said Garza.

For years, Garza has been listed on the archdiocesan website of priest with substantiated sex abuse allegations. Despite the archdiocese naming him as a child sexual abuser, Garza became licensed as a school counselor in 2006 - specializing in Early Childhood-Adolescence.

"I went through all the licensing in the state of Wisconsin. I mean, I honestly I wondered from time to time if anyone would come question me or say something. I've never heard a word, not once. Not once," Garza said.

Garza said there's no reason that he shouldn't have been counseling children.

"I always denied it," he added.

Garza told the I-Team he left Beloit schools in 2015 and doesn't remember the incident the archdiocese found credible even though the church reached a financial settlement with the victim.

"About the only thing I ever heard someone say was whatever happened, the person involved said it was their fault," Garza said. He told the I-Team the alleged victim was 15 at the time.

Garza: "When something like this hangs over you like a cloud, you always wonder..."
Goudie: "What do you wonder?"
Garza: "If this would ever come where somebody would come and start asking you questions about it, I mean, that's, I always thought it would be maybe someone through the district or working would maybe get some information and come talk to me but that never happened."

Garza says he never told anyone, including school and licensing officials, about what happened in Chicago until he opened up to Chuck Goudie. Beloit Public Schools did not respond to multiple requests for comment for this report.

"I can't imagine something more alarming or irresponsible than that," said Marc Pearlman, attorney for abuse victims.

After Chicago priest Jesse Garza left the Chicago Archdiocese amid sex abuse allegations, he went to work as a teacher in a Wisconsin school district.

The Archdiocese of Chicago claims they've removed 65 priests from ministry after credible sexual misconduct allegations since 1950. While roughly half of those are now dead, who's watching the others? The I-Team found men who left the priesthood after sexual abuse claims now living in suburban communities just like anyone else.

Walter Turlo was removed from ministry in 2005, resigned and stripped of his standing as a priest after the archdiocese found "reasonable cause to suspect" he had committed numerous incidents of sexual abuse. He denied the allegations at the time. Just last year the archdiocese settled a lawsuit that claimed Turlo repeatedly sexually abused a young boy from 1978-1979. The I-Team found that he lives around the corner from Robinson Elementary School in Southwest Suburban Lyons.

"Those are so long ago and there been resolved and I'm just living as a private person," Turlo said.

"There's nothing prohibitive about where I live as a private citizen," he said.

The I-Team also uncovered that the Archdiocese of Chicago currently houses two priests, who the church found to have substantiated allegations of child sexual abuse against them, at the Bishop Lyne Residence, a retirement home for priests in south suburban Palos Park.

Despite being accused of sex crimes with young children, they live right next to the manicured soccer fields and a softball diamond of the village's Centennial Park and just down the road from Camp Palos, a year round Girl Scout Camp.

"That is extremely concerning, those are the type of things that keep me up at night," said abuse victim attorney Marc Pearlman. "Why would they put pedophiles down the street from a camp for kids? That seems to me, it's very irresponsible."

"It's very possible that no one is aware that they're there," says Palos Park Police Chief Joe Miller. He said the Archdiocese calls him to let him know if they're keeping any priests with misconduct issues at the residence, and that they've never had any issues with the men housed there.

"If they left the priesthood, they could move next to you and your family and no one would know," said Miller.

The Archdiocese of Chicago spokesman declined an on camera interview request but sent the I-Team this statement about the Bishop Lyne Residence:

"We informed the management of Holy Family Villa when the two retired priests with substantiated allegations of sexual abuse were moved to the Bishop Lyne Residence. We also informed the Palos Park law enforcement authorities. Neither man has been convicted of a crime or is a registered sex offender, therefore they are not required by law to notify civil authorities of their whereabouts.

"However, the archdiocese requires that they live under the Prayer and Penance Program which includes monitoring by a full-time social worker. The program places substantial restrictions on their activities, including requiring permission to leave the residence, and surveillance of their internet use and financial transactions. The men are 72 and 77 years of age. One has significant mobility issues. They are the only two men with substantiated allegations living in an archdiocese residence."

They also told the I-Team that they have no record of requests for references from subsequent employers or licensing authorities for Jesse Garza. They wrote in a statement that, "an attempt was made to follow up with him in 2005 but there is no record that contact was made with Mr. Garza then or at any other time."
Report a correction or typo
Related topics:
religion & spiritualitychicagowisconsinpriest sex abusecatholic churchi teampriestchicago archdiocese
Copyright © 2022 WLS-TV. All Rights Reserved.
RELATED
San Jose diocese to release names of every priest believed to have abused minors
PRIEST SEX ABUSE
Vatican says bishops should report sex abuse to police
Bay Area church abuse victim breaks silence more than 40 years later
Vatican law: Priests, nuns must report sex abuse, cover-up
Fremont Catholic priest arrested for child sex abuse
TOP STORIES
How concerned should you be of new omicron subvariant BA.2?
Snapshot of 49ers' memory-keeper during 2021 playoff run
COVID-19 updates: SF to change indoor mask rules
Teen loses thousands on Zelle after getting offer to be a 'sugar baby'
SFPD links 6th death to 'The Doodler' serial killer, increases reward
Expert explains why new COVID variants may keep popping up
WATCH TOMORROW: 49ers-Rams NFC Championship Game preview
Show More
49ers-Rams NFC Championship could break ticket record
Oakland's own Amy Schneider reflects on historic 'Jeopardy!' run
California representative pushing for 4-day workweek in new bill
NatGeo debuts 'Into the Depths' podcast on search for slave shipwrecks
7-year-old SF girl and mom pray for miracle to avoid eviction
More TOP STORIES News