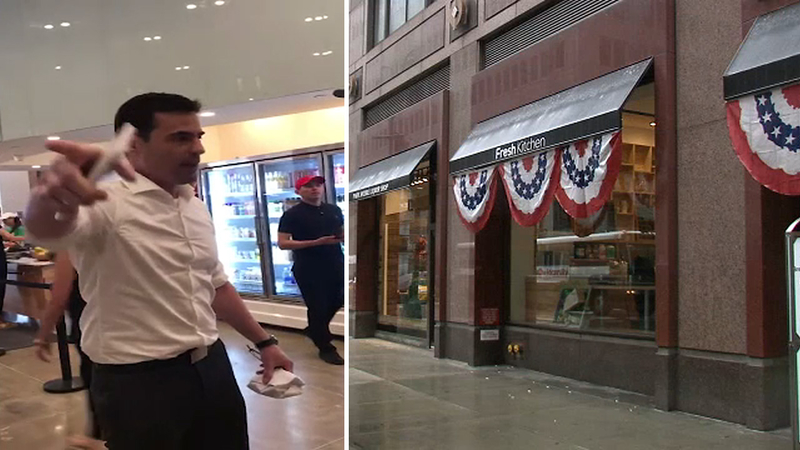 NEW YORK -- A Manhattan lawyer whose race-fueled tirade inside a Midtown restaurant went viral has apologized and said he respects and appreciates "the remarkable diversity" New York City offers.

Attorney Aaron Schlossberg posted the message on his Twitter and LinkedIn pages, saying he is not racist and is "deeply sorry" for his actions.

"To the people I insulted, I apologize," he wrote. "Seeing myself online opened my eyes - the manner in which I expressed myself is unacceptable and is not the person I am. I see my words and actions hurt people, and for that I am deeply sorry. While people should be able to express themselves freely, they should do so calmly and respectfully. What the video did not convey is the real me. I am not racist. One of the reasons I moved to New York is precisely because of the remarkable diversity offered in this wonderful city. I love this country and this city, in part because of immigrants and the diversity of cultures immigrants bring to this country. Again, my sincerest apologies to anyone and everyone I hurt. Thank you."

The incident happened inside a Fresh Kitchen around noon last Tuesday, and the fallout was swift. Schlossberg was barred from his office space, and on Friday, a Mariachi band performed songs including "La Cucaracha" during a protest in front of his apartment.

"The clients of your staff are speaking Spanish to customers, when they should be speaking English," Schlossberg says in the video. "If they have the balls to come here and live off of my money, I pay for their welfare, I pay for their ability to be here. The least they could do is speak English."

He then pointed at all the employees he heard speaking Spanish, repeatedly saying "It's America."

Eyewitness News spoke to the 35-year-old customer who captured the rant on her cell phone. She speaks Spanish and works as an office manager, but she did not want to be identified.

She said Schlossberg lost it after the person ahead of him started ordering in Spanish.

Schlossberg then questioned the legality of the employees.

The woman we spoke to said she felt compelled to defend the workers.

After the video was posted online, Schlossberg's Facebook page lit up:

"I'm in tears reading these comments," one person wrote. "The internet is going to have a field day. Your law career in New York City is officially over."

Another person wrote, "Wow dude, you're going to have leave town, serves you right."

Another post read: "Way to ruin your business bro', was it worth it? Do you feel big now?"

It's not the first time Schlossberg has appeared in a video many found to be racist.

After an NYC man was caught on camera ranting against Spanish-speaking restaurant workers, a 2016 of another confrontation surfaced.