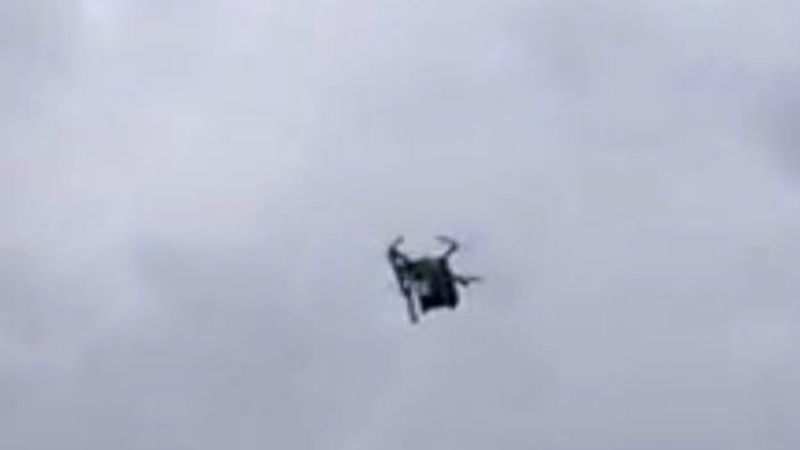 OAKLAND, Calif. (KGO) -- There was an unusual appearance at the 49ers and Raiders games Sunday when a drone flew over Levi's Stadium and the Oakland Coliseum to drop what police described as propaganda leaflets.

In Santa Clara, fans at the 49ers game had never seen a drone fly over the stadium before, which is why they were quite amused when they saw one fly over the southern end zone during the first half.

"We figured it must have been something put on the by the team, by the stadium to drop off freebies to the crowd," said 49ers fan Andrew Boyd.

"We wanted the free stuff. We didn't know if it was from the Niners or whom but we don't say no to free stuff," added David Weller, another 49ers fan.

Instead of freebies, fans got a flyer marked with a big red "X" and lengthy text talking about the first amendment.

"It was some type of First Amendment propaganda free speech stuff. Something about TV stations being taken over," said Lt. Dan Moreno of the Santa Clara Police Department.

It turned out Levi's Stadium was just the first stop. Police say the same drone was used to drop the same leaflets during the the Raiders game at the Oakland Coliseum.

But by that point, Santa Clara Police issued a "Be On The Lookout" to neighboring law enforcement agencies and Oakland Police officers arrested the drone pilot shortly after.

They haven't yet released his name, but his Twitter page has links to videos of him practicing with the drone.

For many fans, the fact that it was an unauthorized drone flying over them, is disconcerting.

"If they dropping leaflets, they can drop anything really if you think about it and it's kind of scary to think that someone can just fly something over during the game and nobody can really stop it," said Ariana Rivera, a 49ers fan.

Police say the drone pilot faces several charges. They say his offenses include FAA violations and local ordinances that prohibit flying near stadiums.