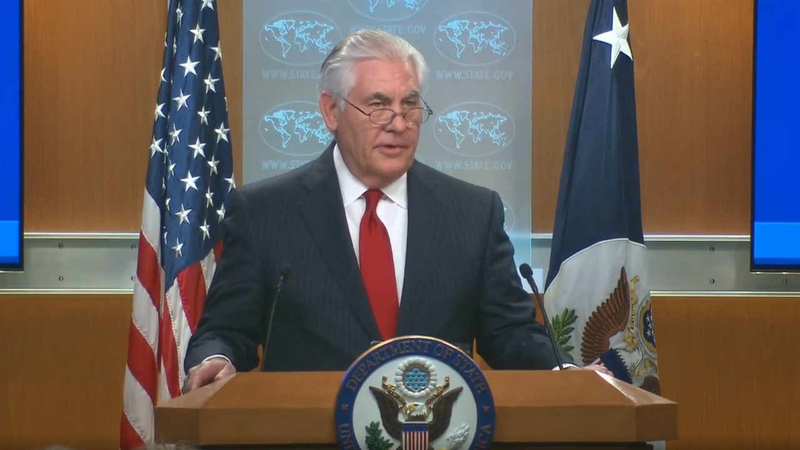 WASHINGTON, D.C. (KGO) -- Rex Tillerson was initially praised for his international deal making as CEO of Exxon Mobil as a key qualification to become Secretary of State. But, with no diplomatic or political experience, he had run-in's with President Trump.

In a January appearance at Stanford, Tillerson expressed hope to coax North Kora to back down on it nuclear ambitions. Then, he learned who's boss.

"While he was trying to open back channels with Pyongchang," said San Jose State political science professor Karthika Sasikumar, "we had the President publicly mock his diplomacy on Twitter, so it's not clear to me that Tillerson was allowed to really exercise his full capabilities."

During a press conference, departing Secretary of State Rex Tillerson said his department "exceeded the expectations of almost everyone" on North Korea.

Supporters of the President think a new Secretary of State was needed. "Well, I'm surprised he lasted that long," said Harmeet Dhillon, a state GOP leader. "There were a number of policy clashes between him and the President, and I don't think he really ever was able to kind of integrate with the State Department apparatus."

Analysts say replacing a Cabinet member is a difficult decision, but this is a critical time globally.

"It's not just North Korea," said Prof. Sasikumar. "There's also the situation in Syria where U.S. and Russian soldiers have come close to open conflict several times now, so these are very dangerous flashpoints."

And the President admits he agreed to sit down with North Korea's leader without direct input from his Secretary of State.

"I made the North Korea decision," said Mr. Trump, "with consultation from many people, but I made that decision by myself."