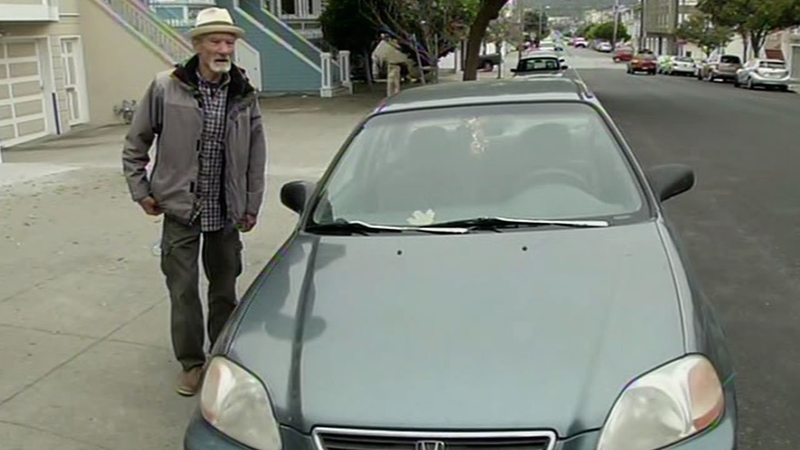 SAN FRANCISCO (KGO) -- Inspired by a story, a San Francisco police officer made it his mission to find a stolen car with the ashes of a man's wife inside. The man is on a road trip to spread the ashes in the ocean, but a thief stole his car last week.

Philip Hollenbeck will be able to fulfill his wife's dying wishes of having her ashes spread in the Pacific Ocean, along the Oregon coast, but the most surprising detail in this story is the gesture made by the car thief.

"I've been on the road for three weeks. I've been to San Diego, Santa Barbara, LA, even bad neighborhoods," Hollenbeck said.

Traveling from New Mexico to the Oregon coast, Hollenbeck stopped in San Francisco. ABC7 News spoke to him last week after someone stole his car from Fourth Avenue and Cabrillo in the Inner Richmond, with his late wife's ashes inside.

"I felt really bad for him and wanted to see if there was something I could do to help him," San Francisco police Officer Ray Kane said.

Compelled by Hollenbeck's story, Kane checked all the department's databases Monday morning and when that didn't work.

"I did what we call a grid search, I drove up and down the streets kind of surrounding where it was taken and I found it," Kane said.

Kane then called Hollenbeck to let him know he found the car a block away from where it was stolen. Kane said, "It felt great. It's one of the reasons you get into police work is to be able to make calls like that."

Most everything is gone from inside the Honda Civic, except the one thing Hollenbeck had to find -- his wife's ashes.

"Somebody realized what they were and they purposely put them back there so he would have them," Kane explained.

The thief had taken the ashes out of a bag, but then returned everything to original condition and carefully tied a knot.

"Well, it just kind of took my breath away," Hollenbeck said.

Hollenbeck may never find the stolen journals, musical instruments and other deeply personal items lost, but he's gained some faith in humanity.

"It gives me a good feeling and hope that somebody had a conscience," Hollenbeck said.

Great news! @SFPD found man's stolen car w/ wife's ashes still inside. Now he can taken them to OR as planned. pic.twitter.com/IEp1Res1mY