KGO
By by Katie Utehs
OAKLAND, Calif. (KGO) -- A big league promise made to a Santa Rosa fire survivor was fulfilled Saturday night. Nine-year-old Loren Smith lost his home and beloved Athletics memorabilia during the North Bay Fires, but it hasn't charred his love for the game.

"It's great to see his personalized jersey. The big smile on his face. We have an amazing A's fan here to throw out the first pitch. It's an incredible night," said Dave Kaval, Oakland Athletics' President.

"It feels a long way now. It feels like a long way once I look at it," said Loren, as he eyed the pitcher's mound from the third base dugout. "I've been practicing with my dad," he said.

"Oh, it's unbelievable. It's larger than life," says Tait Smith as he waited with Loren on the field.

"Good luck out there. I'll be watching you," said Bob Melville, A's Manager.

Loren's journey to the big league has been a difficult one. It started 64 miles north of Oakland in Santa Rosa. After his house burned down his grandmother encouraged him to write a letter about the loss of his beloved A's memorabilia.

His letter went viral after ABC7's Katie Utehs tweeted it. From there the A's, fans, and teams across Major League Baseball sent memorabilia to replace his collection. The A's coordinated a day to present Loren with the gear.

"How would you like to throw out the first pitch," asked Kaval back in October.

VIDEO: Loren gets a big surprise from his favorite team the Oakland Athletics

Big league dreams were fulfilled at age 9 for one North Bay fire survivor.

Six months later, a promise kept as the young boy hoped over the foul line on his way to the pitcher's mound at the Oakland Coliseum.

The anticipation of the day has helped Loren keep his mind off the fire. "It makes me feel better since my house burned down. It made me feel way better," said Loren.

"Loren, let's see what you've got from the mound," boomed the announcer. And from there... Loren threw it across the plate.

"I thought it would be like our mound, but it was way farther," exclaimed Loren to a friend waiting off the field.

It's a memory that'll shine brighter than any fire.

"Nice pitch young man," said an A's fan as Loren walked off the field. He replied with a thank you and joined family and friends in the stands to watch the game.

In addition to replacing much of Loren's memorabilia the A's gifted the family 2018 season tickets.

Young @Athletics fan pens heartbreaking letter to team after losing all of his baseball memorabilia in the #NorthBayFires #abc7now pic.twitter.com/5dNDt5PLkY 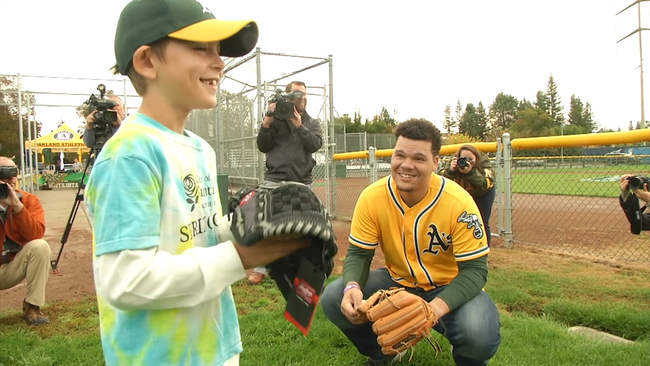