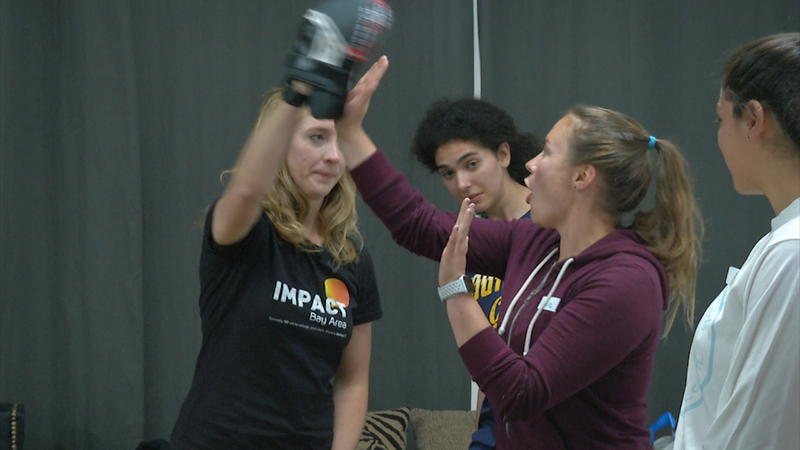 SAN FRANCISCO (KGO) -- More than 5 million Americans are the victim of violent crime every year, that staggering statistic comes from the U.S. Department of Justice. How do you keep from becoming a statistic? An East Bay group has been helping people figure it out.

At a San Francisco Sports Basement store, we met up with a group of women from an organization called Girls Leading Girls. It is a non-profit that helps empower young girls through soccer.

On this day, they were learning how to keep safe by another non-profit, IMPACT Bay Area.

They have empowered more than 15-thousand people to protect themselves with a range of classes.

From basic moves like at this class, to more advance classes that are hands-on.

Trainer Sage Weaver was teaching this class. "What we really try to focus on is sometimes the physical stuff happens, but the best fight is no fight," said Weaver.

According to the National Sexual Violence Resource Center, one in five women and one in 71 men will be raped at some, point in their lives.

One in five women and one in 16 men are sexually assaulted while in college.

Simply putting your hands up creates a defensible space, sends a message to a would-be attacker, stay away. Yelling loudly will get the attention of people nearby.

"It is much more powerful to say something like, 'I don't know this man - I am being attacked, leave me alone,' " said Weaver.

It is hard not to leave one of these classes feeling empowered.

Brianna Russell runs Girls Leading Girls, she said, "Knowing that I have these tools now, and that I have practiced it, and I've gone through it in a safe place, makes me feel like I could do it in a normal situation in the street."

Fellow coach Karli Jonasen said, "We were kind of uncomfortable with it at first, not sure what to expect, and not sure we could do it, and I think that is something that girls do a lot. We kind of question how strong we are, but once we get it we're good."

Linda Leu is the Executive Director of Impact Bay Area, she said, "It is hard to set boundaries, and what we know from statistics is that like 80-percent of sexual assaults are perpetrated by people you know."

Leu stopped by ABC7's Newsroom to give seven tips to stay safe.

The first tip, use your intuition.

"Be in tune with what it feels like in your body to feel like you could be in danger," said Leu.

Tip number 2: Always have situational awareness, know exits, and where you can escape to safely.

Tip 3: Make sure you use your voice.

"So we try to go for the deep, short, sharp syllables, like I would say maybe NO!" said Leu.

Leu said, "Let's say someone is getting too close to you and you're feeling very uncomfortable - you have the right to say hey, you are making me a little uncomfortable - BACK OFF!"

Tip 5: As a last resort defend yourself.

"One of the strikes that we teach is an eye strike. So what we do is we make - stick your thumbs out - and you wrap your fingers around," said Leu "Like little bird beaks, then you imagine your scary face in front of you, and you do this - NO!"

Leu said, "The idea is always to get yourself to safety as quickly as possible."