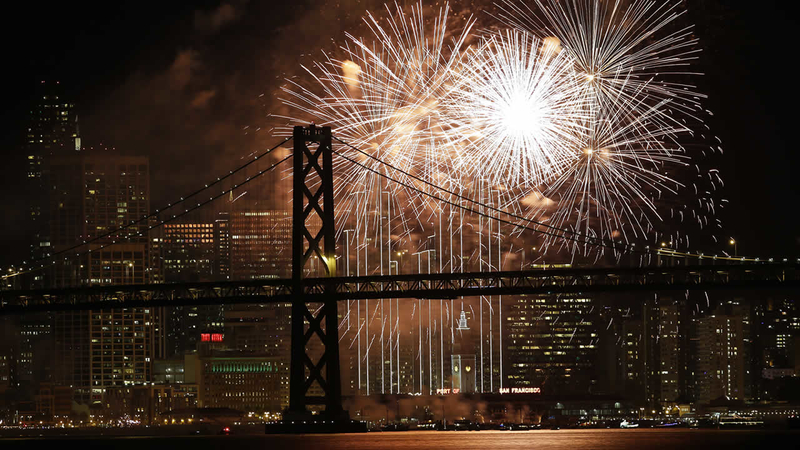 SAN FRANCISCO -- You may already know whose arms will hold you good and tight when it's exactly twelve o'clock that night--but where are you dining on New Year's Eve?

If you need help finalizing your plans for the 31st, we've rounded up 10 restaurants in SF and Oakland where you can still snag a table.

Americano Restaurant and Bar, located inside Hotel Vitale in the Financial District, is hosting a special New Year's Eve meal next Sunday.

From 6pm to 9pm, the restaurant is serving a four-course prix-fixe menu for $95 per person and $135 per person with wine pairing.

Diners will round out their meal with a choice of vanilla bean panna cotta, honey poached pear, or profiteroles.

Those that want to stick around for an afterparty can still purchase tickets to its New Year's Eve party, Confetti and Cocktails, which will take place on the Embarcadero from 9pm-2am.

Guests can expect to take in the breathtaking views of the San Francisco Bay while sipping on "hand-crafted, seasonal cocktails, premium spirits and champagne."

The first option is a five-course prix fixe for $185 per person, which includes hamachi, wagyu beef tartare, celery root and parsnip soup, an angus beef filet and a California bay chiboust with currants, huckleberry and candy cap ice cream.

From 3pm to 9pm, the eatery is serving Oaxacan specials with options like lamb shank, pozole, pipian (mole verde), and more. Customers may also order from the regular a la carte menu, which features plates like chicken chile relleno, tacos, enchiladas, seafood entrees and many more. (See the full menu here.)

Currently on OpenTable, there are dinner slots available for 7pm and 7:15pm.

The Grill, located inside The St. Regis San Francisco is offering a special menu for diners on Sunday, December 31st.

According to the business, the eatery has "become a preeminent dining destination" that offers "relaxed luxury and timeless elegance."

The main entree will be grilled prime ribeye with wild mushrooms, spaghetti squash, Brussel sprouts and black truffle. Rounding out the meal: a bittersweet chocolate mousse. For an additional $75, a wine pairing is available.

The New American restaurant and beer garden will open its doors at noon on Sunday, December 31st to serve diners a New Year's Eve meal.

Starting at 9pm, customers can catch a performance by The Mermen for $40 per person and those who stay till the new year will receive a complimentary glass of sparkling wine.

Homestead, the New American restaurant that opened in Oakland in 2013, is hosting a New Year's Eve celebration.

The menu features plates like "ribeye cooked in the fireplace with sunchokes, chanterelles and bone marrow or butter poached turbot with robuchan potatoes, artichokes and Dungeness crab and others.

Diners who stay to ring in the new year will receive a complimentary sparkling wine toast at midnight. Currently, reservations are still available on Open Table for 5:30pm, 5:45pm, 8:45pm and 9pm.

At French-Vietnamese restaurant, Le Colonial, guests escape San Francisco and enter a space that "evokes the ambiance of French colonial Vietnam in a lush, romantic setting."

Parties of eight or more guests must order a family style prix fixe menu, which is either $85 or $95 per person. There is also an after party at the lounge, which will be bumping until 2am, so if you would like to join in on the fun, be sure to purchase the right ticket.

You can buy tickets to the dinner and party here.

Yuzuki Japanese Eatery, an East Asian restaurant located on the corner of Guerrero and 18th streets, is offering a special menu on New Year's Eve.

According to the eatery, it's the first business in the U.S. to use koji, which is a fermenting agent that's used to make essential Japanese foods.

Next Sunday, from 5:30-9:30pm, diners will be able to order off its regular menu, which includes items like sashimi, braised pork belly, its house specialty, 'Koshihikari rice,' and more. (See the full menu here.)

Or, you can choose to order the toshikoshi soba, which according to the restaurant, is "traditionally eaten in Japan before the new year."

Eve's Waterfront Restaurant will be open on New Year's Eve starting at 5pm for its holiday special. Chef Brandon Peacock is serving up a five-course prix fixe meal for $75 with a variety of dishes.

Expect to see plates like grass-fed beef filet, herb-roasted lamb rack, double-cut Berkshire pork chop, house-made ravioli and more. In addition, those who choose to take part in the prix fixe meal will enjoy access to the New Year's Eve Party, with the option to upgrade to the open bar or VIP tables.

The last seating for next Sunday's dinner will happen at 7:30pm, so plan your night accordingly. Information and tickets to the dinner or after party can be found here.

In Noe Valley, Chez Marius, the French bistro located on 24th Street, is offering a three-course prix fixe menu for $75.00.

From 5:30pm to 10:30pm, guests will dine on items like roasted stuffed lobster with celery and onions, served with prawns risotto and cognac sauce, a grilled filet mignon with gratin dauphinois, shallots and foie gras sauce and more.