ONLY ON ABC7NEWS.COM: Tracking down fake landlord who duped a South San Francisco family out of $10,000

KGO
By Luz Pena
SOUTH SAN FRANCISCO (KGO) -- We've been covering the story of the South San Francisco family who was duped out of $10,000 by a fake Landlord.

They are now sleeping in a hotel room for a week and their GoFundMe has raised more than $16,000 thanks to you Bay Area.

We met up with Victor Gonzalez outside of a second property he found on Craigslist posted by the same fake landlord who duped him out of $10,000. How did he know it was the same guy? The phone numbers were the same

"This time around, what did the fake landlord tell you? The same, that he is the property owner and that he left the key because he is the owner," said Gonzalez.

This time Gonzalez wasn't going to fall for the scam again. Instead, they texted back and forth, and the fake landlord even got him a code to the property's lock box.

"He didn't know that it was me," said Gonzalez.

We drove to Walnut Creek to meet with the actual property management company that is renting the San Francisco house posted on Craigslist.

Ed Basaldua is the President of Park One Properties, he said they stopped posting on Craigslist years ago.

Luz Pena: "Did you know this?"

Basaldua: "I didn't know that, but I'm also not surprised."

Basaldua says these scammers are sophisticated.

"I've had my tech person trace IP Address to Nigeria or Turkey and there is not much we can do," he added.

Park One Properties now watermarks every photo and uses a remote access system where anyone who wants to see a property needs to sign up and even take a selfie.

So did the scammer do this?

"It will verify that you are registered and give your code to open the box and get the key," said Basaldua.

Luz Pena: "Do you have that person information in your system?

Basaldua: "Of course we do."

We asked to see the system but he declined.

"I can't give it to you but if police reach out we will give them that info and cooperate," said Basaldua.

We texted the alleged fake landlord and he replied and offered us a property.

Now, how can you protect yourself? Before you give any money to a landlord look them up on the California Department of Real Estate website. You type in their name and it will tell you if they are who they say they are.
Report a correction or typo
Related topics:
societysouth san franciscorental propertyrentsrental scamsfraudrenters
Copyright © 2020 KGO-TV. All Rights Reserved.
RENTAL SCAMS 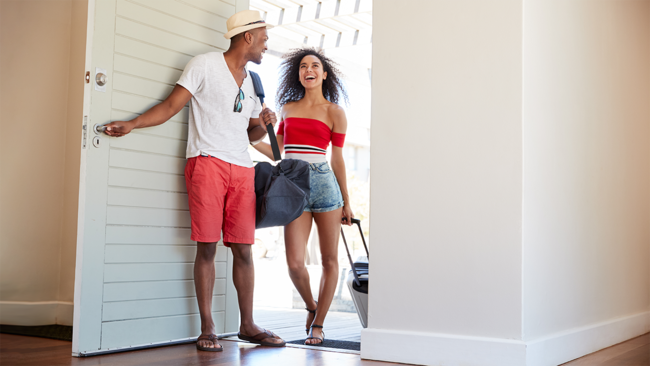