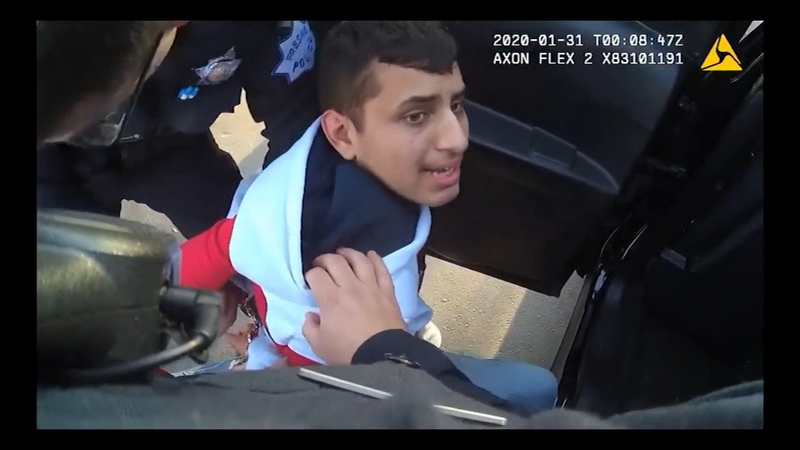 The officer struggles to place handcuffs on the teen while his sister and mother watch in horror.

A second officer arrives, and the skirmish is eventually taken outside the fast-food chain.

Investigators say Ramos was screaming and threatening to hurt himself and his family.

WATCH: The Fresno Police Department has released the officer bodycam footage from the incident where officers handcuffed a 16-year-old boy with autism and epilepsy.

"I feel like Fresno PD did their job and did what they're supposed to, but maybe things could've been handled a little differently," says Stephanie Ramirez with the Fresno Austim Network.

Ramirez is the founder of the Fresno Autism Network and feels first responders should be properly trained on how to handle crisis situations when dealing with someone with autism or other special needs.

"Something like autism is what we call an invisible disability," Ramirez said. "It's not like other disabilities where you need accommodations like a wheelchair. And these kids vary across the spectrum."

Ramos' sister can be heard on the 911 call saying her brother was coming out of a seizure and was being combative.

"He's being very combative," Ramos said in the 911 call. "He's just 16 years old and he's in the restroom and not responding."

Fresno Police claim the handcuffs were used to restrain the teen as they waited for help and to prevent him from hurting himself.

The family says David recently left the doctor after suffering an epileptic seizure, but those episodes returned while they visited the Fresno restaurant on Blackstone.

The altercation is now being reviewed by the Department's Internal Affairs Unit and the City's Office of Independent Review.

"It's called post-epileptic phase, and that's the time after having a seizure, like their recovery time," Ramirez said. "The kids might look coherent, but they might not be back. Sometimes it might take them a few minutes to a few hours to be back to their normal state of being."

The Ramos family did not want to comment today following the release of the body cam footage but did say David is now recovering.

EDITOR'S NOTE: A previous version of this story incorrectly stated that the teen was arrested. It has been updated to clarify that he was only handcuffed.
Report a correction or typo
Related topics:
societyfresnofresno police department
Copyright © 2021 KFSN-TV. All Rights Reserved.
TOP STORIES
53 cases of new R.1 COVID variant detected in CA
Pfizer submits data to FDA on its COVID vaccine for kids 5-11
Our America Equity Report
How CA leaders hope to improve vaccine rates in Black communities
SF State delays start of classes due to 'non-specific threat'
EXCLUSIVE: SJ man warns others after being harassed over dinosaur flag
WATCH TODAY: Gov. Newsom to sign affordable housing bill
Show More
Wiggins says he will stick to beliefs regarding vaccine
SJ considers ban on flavored tobacco products
COVID updates: CA has lowest transmission rate in US
Laundrie's parents say they don't know where he is as FBI searches
Employees sue United Airlines over COVID vaccine mandate
More TOP STORIES News