KGO
By Kate Larsen
WALNUT CREEK, Calif. (KGO) -- Outside the Walnut Creek Police Department Wednesday night, there were officers outside staged in tactical gear in case protesters got out of hand.

Late Wednesday night, protesters were also in a neighborhood in front of the Walnut Creek mayor's house.

ABC7 cameras were there Wednesday night when about 150-200 protesters, according to police, were in the mayor's driveway and in front of her home.

There's also video of what appears to be a burning Blue Lives Matter flag.

The Walnut Creek Police Department anticipated that the group was going to walk down to the police station, but they appeared to stay in the neighborhood.
.
This came after cryptic social media messages were sent around today, which started to concern a number of the businesses.

Walnut Creek police alerted local businesses Wednesday night that it was possible that there was going to be looting.

"I believe that black lives really matter and I believe this is a turning point in our history and if the protesters can manage to stay peaceful then I am hoping it will actually do some good," the mayor said.

On Main Street Wednesday night, a block of businesses were boarded up, some that had just reopened this week.

Walnut Creek police officers were also staged in the Broadway Plaza shopping area, with security officers at the Apple Store.

Police also shut down part of Ygnacio Valley Road because of protesters in the area.
Report a correction or typo
Related topics:
societywalnut creekprotest
Copyright © 2021 KGO-TV. All Rights Reserved.
RELATED
Clean up underway in Walnut Creek as police brace for more looting 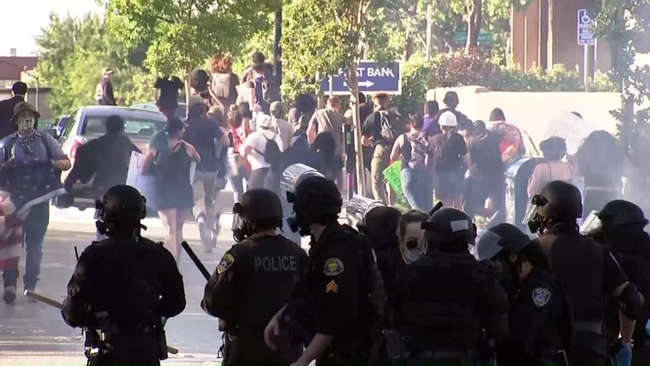