Fremont WWII veteran survives combat only to be 'killed by clerical error' 73 years later, stripping him of his VA benefits 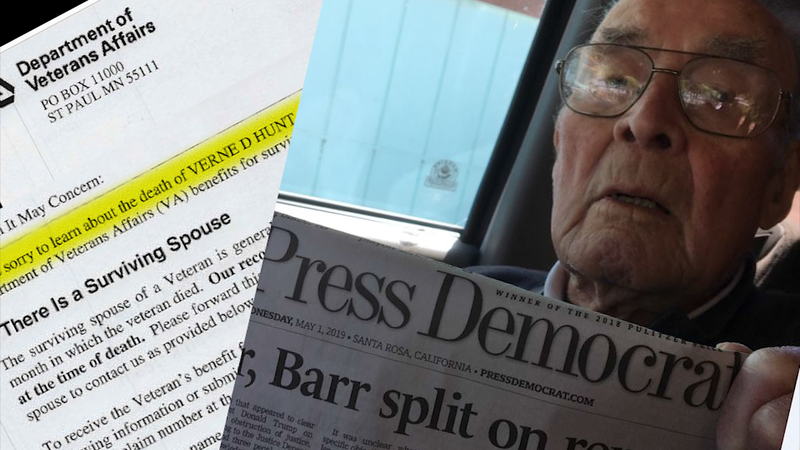 FREMONT, Calif. (KGO) -- The Hunts are a proud military family: their Dad fought in World War II, a son in Vietnam. Now they find themselves confounded, stymied by an obvious mistake at Veterans Affairs. Ironically, it was a mistake so simple, nobody could correct it.

Vern Hunt was just 20 years old when he was sent to fight in World War II. He survived two years in combat, helped capture six German cities, saw 20 of his comrades killed in gunfire and returned weary but safe at war's end.

Then, 73 years later, his family inexplicably received a letter of condolence from the United States Department of Veterans Affairs.

John Hunt, Vern's son, held up the letter and said, "To whom this may concern, we're sorry to hear of the death of Vern D. Hunt."

The letter said Vern was dead, but Vern is here - 96 years old and still very much alive.

At first it seemed like a simple mistake, easy to fix. It wasn't.

"How do you declare somebody alive that's been declared dead? There was just no way we could do it," said Vern's son, Tim.

His sibling, Patrick, added, "It was like nobody could do anything. Nobody had any."

The irony was glaring. Vern had survived a brutal war zone only to be killed by a clerical error at the VA.

And that was a big problem: The VA cut off all of Vern's benefits -- about $2,000 a month for his pension and healthcare.

"I appreciate the VA, I'm not trying to badmouth anybody, but I think for veterans everywhere, they deserve better," John said.

His family contacted one VA office after another, submitted piles of documents, even sent "proof of life" including a photo of Vern holding that day's newspaper and another of Vern holding the very letter that said he's dead.

All to show he isn't.

Previously, the military had showered Vern with honors: the bronze star, the World War II Victory medal, a monument to the "fighting 69th infantry" in which he served.

But now it seemed the country was sweeping him aside.

Vern's whole life was shaped by his wartime service. The night before he shipped out, a friend introduced him to a young woman named Mary.

"And Dad hit it off with this young lady, and for two years, they corresponded while he was in Europe fighting," explained Tim.

Vern and Mary wrote to each other for the entire two years he was in combat.

When he returned, Mary was waiting for him at the ship.

"Yeah, you remember now, huh? You told me mom looked so good," said Tim Hunt, while turning to his dad.

Mary and Vern were soon married, had seven children, and eventually settled Fremont. Two of their boys, Tim and Pat, grew up to be Fremont police officers. John became a Marine. Vern and Mary celebrated 67 years together, before Mary died six years ago, leaving the aging soldier in the care of his kids.

The family contacted 7 On Your Side. We reached out to the Department of Veterans Affairs and found just one wrong digit on a Social Security number had unspooled Vern's life. The VA corrected the mistake and restored his benefits to a soldier not forgotten.

"They just did what they had to do to keep us free," Tim said. "He's done so much for us, it's about time we take care of him."

The family wants to emphasize they don't blame the VA for stripping away his benefits, but wish the system were simplified so that veterans everywhere could more easily access the programs and benefits they've earned. We appreciate the VA coming through for this veteran -- Corporal Vern D. Hunt.