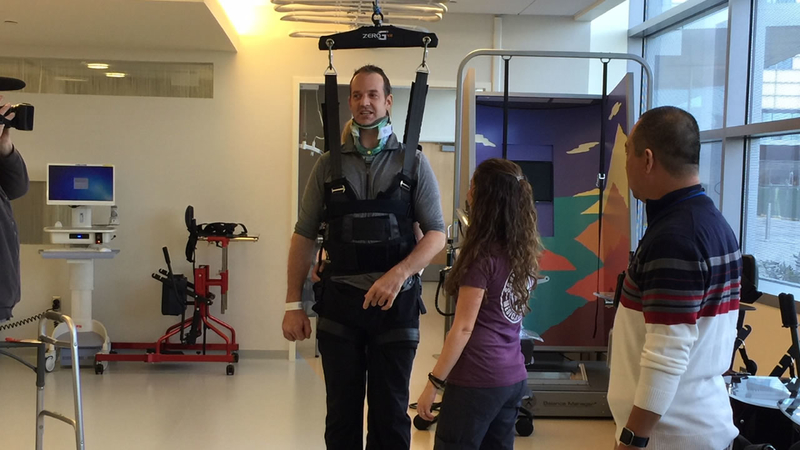 SAN JOSE, Calif. (KGO) -- Thirty-seven-year-old Matthew Wetschler was body surfing off Ocean Beach last month but crashed head-first into a wave. His spine was broken and he had no pulse when another surfer was able to get him back to shore.

Six weeks after the accident, he is in rehabilitation at Santa Clara Valley Medical Center and is able to walk with the help of a special device.

Wetschler is an emergency room physician at Valley Medical Center. He is the beneficiary of an aggressive protocol that had him in surgery at Zuckerberg San Francisco General Hospital three hours after he was brought in by ambulance.

It's called "ultra early surgery," which Dr. Sanjay Dhall from Zuckerberg says has been studied. Wetschler is the first patient to have it done outside a study. Wetschler's father, a retired internist who practiced in Pittsburgh, Pennsylvania, says his son Matthew was able to flex his left ankle within 24 hours after surgery.

Six weeks after a surfing accident, Matthew Wetschler is in rehabilitation at Santa Clara Valley Medical Center and is able to walk with the help of a special device.

Wetschler requested to be transferred to Valley Medical Center, which recently opened a new rehabilitation facility in the new Sobrato Pavilion. There he showed ABC7 News how he uses a Zero-G balance system that allows him to practice walking, kicking a soccer ball, tossing and catching an inflated ball, and doing lunges, free of the gravity and body weight that would put stress on his body. He spends five hours a day doing various forms of physical and occupational therapy.

When he's back in his third floor hospital room, Wetschler creates art as an expression of the progress he is making to hold paint brushes and other materials he used to create painting on canvas -- which you will see only on ABC7 News.

He is doing two projects, one using medical equipment that is part of his treatments (syringes, tubes, iodine, etc.) and one that is monochromatic using broad paint strokes. In the second project, Wetschler plans to produce one canvas each week for the next year. You can see the progress in the three canvases he has created so far in terms of his control of brush strokes.

Matthew Wetschler shows a painting he created in his hospital room at Valley Medical Center in San Jose, Calif. on Friday, Dec. 22, 2017.

Wetschler says he looks forward to surfing again in the future. Dr. James Crew, VMC's chair of physical medicine and rehabilitation, projects that Wetschler could be back to work by this time next year. However, Wetschler jokes he's enjoying the time off.