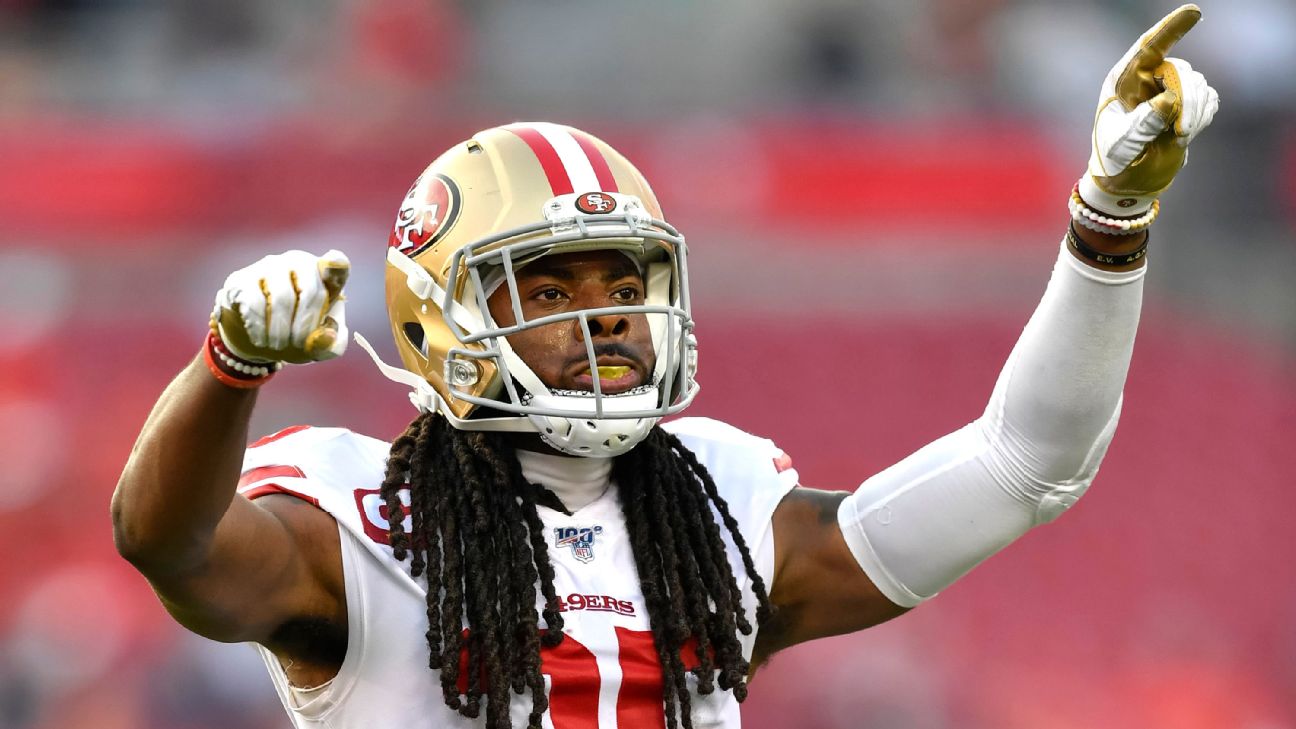 SANTA CLARA, Calif. -- As various protests of systemic racism have taken hold of the country since George Floyd's death on May 25, San Francisco 49ers cornerback Richard Sherman believes this time they could lead to more meaningful change.

"In the time since I've been around and I've been alive, I don't remember it being this strong of an impact and it reaching this many people and this many people being upset and emotional about it," Sherman said Wednesday. "The way the world has been, even in 2016 and 2017, when those guys were making it about police brutality and just changing the inequities that we live in as African Americans, they found a way to dull down that message and to divert it and make it about something else in a way to avoid the conversation. And I think this time, it's too full-fledged and most people are actually getting the messaging and seeing it firsthand.


"Nobody can turn their eyes away. Nobody can turn away from what they're seeing. Any human with any true empathy in them for their fellow human being would feel that strong. That's why sometimes you sit there and to make the point to people who don't get it, you have to try to take yourself out of seeing that as a random stranger and see that as one of your own. See that as one of your brothers, your sisters, your cousins, your mom, your dad. And then the feeling that evokes should energize you to add yourself to the fight. I think that's why this will last a lot longer and the impact will be greater."

Floyd's death in Minneapolis has sparked protests and rallies all over the country. Floyd, a black man, died after Derek Chauvin, a white police officer, kneeled on his neck for more than eight minutes.

Athletes, coaches and members of organizations in most sports have since taken the opportunity to speak up via prepared statements, donations, news conferences or a combination therein.

Some players, such as Washington running back Adrian Peterson, have already said they intend to carry their protests to the field in some capacity next season. Peterson said last week he will "without a doubt" be kneeling during the national anthem to protest social injustice and that he expects others will join him.

For his part, Sherman said that teams will try to be unified when protesting, but at the end of the day, each player will do what he wants.

"You understand that everybody has their own ways and ways of doing things, and ways of coping, and ways of, I guess, living," Sherman said. "And you lead them to that. I can't tell anybody to talk like I talk, walk like I walk, maneuver like I maneuver, or protest like I protest, or feel a certain way about a subject that I feel a certain way about, unless I have that empathy and I have that connection with them. And I think football, there's a lot of that. People will empathize with one another and have that brotherhood even if they don't protest the same way."


Last week, on the heels of the release of a video from some of the league's marquee players telling the league what they want to hear from it, NFL commissioner Roger Goodell put out a video condemning racism and admitted the league was wrong for not listening to NFL players and encouraging them to use their platform when Colin Kaepernick began protesting in 2016.

Goodell did not mention Kaepernick by name in the video.

"The NFL is a PR machine and they know how to construe the messaging to get their point across and to appease and pacify the public without overstepping what they consider their moral high ground and stepping off of that pedestal," Sherman said. "That's the unfortunate part."

The 49ers drafted Kaepernick in 2011 and he spent six seasons with the team before opting out of his contract after the 2016 season. At the time, new Niners coach Kyle Shanahan and general manager John Lynch had informed Kaepernick he would be released if he declined to opt out. Kaepernick has remained out of the league since, coming to terms on an undisclosed settlement with the NFL in 2019 after filing a grievance saying it colluded to keep him out of the league.

Sherman said Kaepernick should have a job but emphasized a point he has made previously when asked about the topic: It's not up to him.

"I can want him to have a job and I can think he deserves a job as much as anybody and everybody has said it who has said anything," Sherman said. "Because he was a good player. He showed he could play in this league. He could play at the highest level, so he deserves a job but in order to answer those questions, I would have to be one of the decision-makers who didn't give him a job and I'm not that person. I think that until those people are asked those difficult questions, we'll never get the answers."
Report a correction or typo
Related topics:
sportsespnnewssan francisco 49ersnflrichard sherman
Copyright © 2022 ESPN Internet Ventures. All rights reserved.
TOP STORIES
49ers fans 'coming in full force' to NFC Championship in SoCal
UCSF neurologist study reveals connections to COVID brain fog
Community reacts to antisemitic fliers found in SF neighborhood
Cause of death revealed for 23-year-old woman found dead after date
Expert explains why COVID can cause fertility issues in men
CA students must get COVID-19 vaccine under new proposed bill
Man pleads guilty to brutally abusing 4-month-old puppy
Show More
Family, colleagues honor young sheriff's recruit killed on I-580
Woman killed in 'targeted ambush' at her birthday party in SoCal
Health experts believe Bay Area has already reached omicron peak
'Promised Land' explores American dream with diverse cast
EXCLUSIVE: Woman shoved to ground in Oakland's Chinatown speaks out
More TOP STORIES News