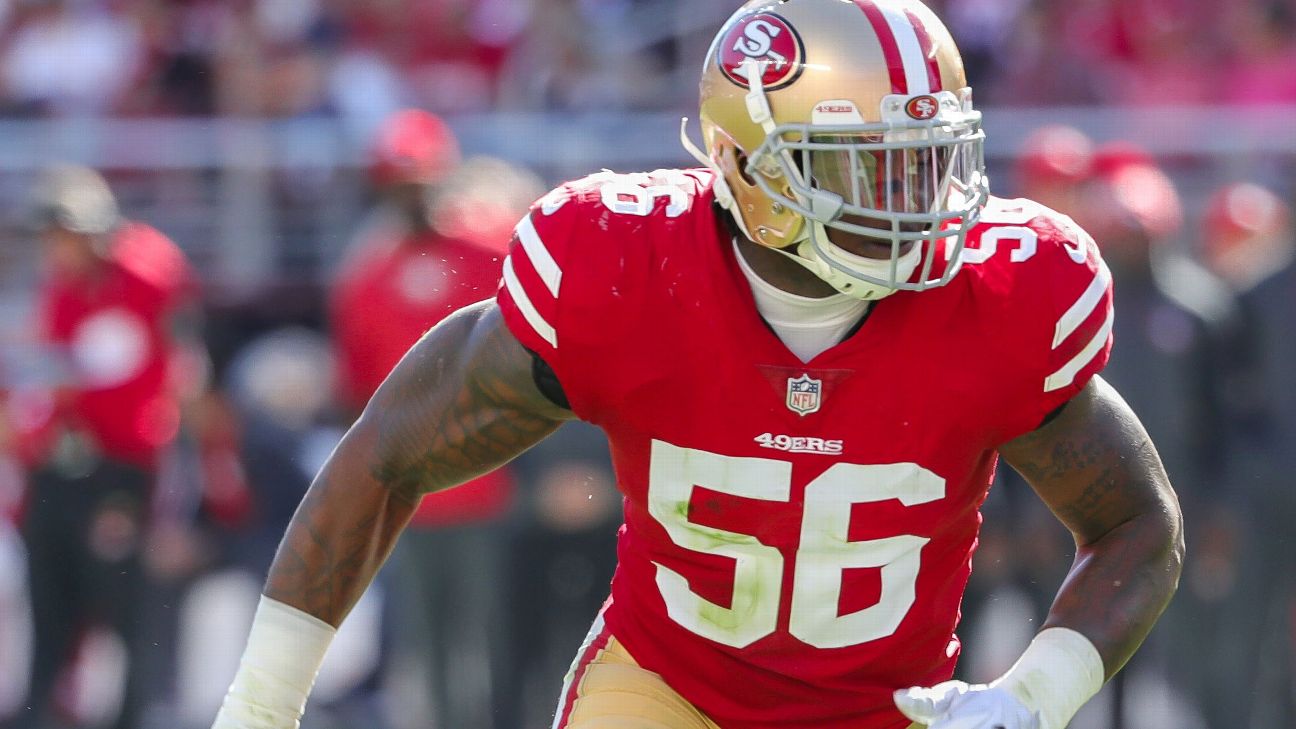 TAMPA, Fla. -- The San Francisco 49ers are releasing linebacker Reuben Foster after he was arrested late Saturday night at the team hotel on a charge of misdemeanor domestic violence.

The arrest report from the Hillsborough County Sheriff's office said Foster was arrested at 9:10 p.m. ET Saturday at the Grand Hyatt hotel in Tampa and booked into jail two hours later. Foster's bond was set at $2,000 during a bail hearing Sunday morning, along with orders to avoid any contact with the accuser. Foster was released on bond Sunday afternoon.

Foster's latest arrest comes on the heels of a tumultuous offseason in which he was arrested on charges of felony domestic violence stemming from a February incident at his home in Los Gatos, California.

Niners general manager John Lynch and coach Kyle Shanahan stood by Foster as the previous domestic violence case played out, but both were emphatic that any more issues would likely result in Foster's release.

On Sunday morning, Shanahan, Lynch and the organization followed through on that.

"We have a set of standards in place that the players were involved with in developing," Lynch said. "In this case, it was communicated exceptionally clear and to the point as to what we expected out of him, and unfortunately what transpired yesterday, this isn't a comment on what happened there because that would be mere speculation on our part. It's more of a comment on him not living up to what we had communicated and to the energy and the time that we've invested in him.

"That doesn't mean we don't love him -- we all do, we care for him -- but we feel like it's in the best interest of our organization to move on at this point, and that's a very tough decision."

Lynch was at dinner Saturday night when informed of Foster's arrest, at which point Foster was already in the custody of local police. The Niners players and coaches were in team meetings at the time, and Shanahan said as soon as he heard of the incident, he resolved to cut ties with Foster.

Shanahan and Lynch then discussed releasing Foster, went to ownership with it and decided Sunday morning that parting ways was the best move for the organization.

Foster will now go through more legal proceedings, but the Niners did not feel the need to wait it out because Foster failed to meet the standards that were put before him after the previous domestic violence arrest.

"We'll see what happens in a court of law; I wasn't there," Shanahan said. "But too many things have happened, and we've tried to help him out a lot, and I know he has been trying too, but this was a mess-up that it doesn't matter if he did [it] or not [for him to stay on the team]."

Shanahan declined to elaborate on what those other things were, but he indicated that none was as damning as what took place Saturday night.

The 49ers officially announced that they will be releasing Foster in a one-sentence statement sent at 8:50 a.m. ET Sunday. That move will become official Monday when the NFL's transaction wire resumes business.

According to the arrest report, the woman pressing charges against Foster for Saturday night's incident is Elissa Ennis, the same woman who accused Foster of felony domestic violence earlier this year.

Ennis recanted those allegations at the preliminary hearing, saying she lied repeatedly in an effort to extort money from Foster. That resulted in those charges being dropped May 23 because of a lack of evidence.

Saturday's report says Foster and Ennis were in an "on-again-off-again" relationship for the past three years and that she stated Foster "slapped her phone out of her hand, pushed her in the chest area with one hand and slapped her with an open hand on the left side of the face" on Saturday night. It also says that Ennis has a 1-inch scratch on her left collarbone and that she intends to prosecute Foster.

Lynch declined to go into specifics of what happened Saturday night but said "unequivocally" that the hotel room in which Foster and Ennis met was not on one of the floors the team had reserved for players.

According to Lynch, when teams go on road trips, they generally have two or three floors reserved, and each floor is manned by security. However, players and coaches are given the chance to reserve other rooms in the hotel for friends and family.

The news of Foster's arrest and pending release didn't reach Niners players until Sunday morning, as most went to bed at the 10:30 p.m. bed check without being aware of his situation. The news was everywhere when the team woke up before its 27-9 loss to the Tampa Bay Buccaneers.

Shanahan said Foster wasn't going to play anyway because of a hamstring injury, and Shanahan and his players said they didn't believe Foster's situation had an impact on the outcome of the game.

Cornerback Richard Sherman, who has a locker next to Foster and made it a priority to try to help the younger player after signing as a free agent, said repeatedly Sunday night that he "hated" that Foster's situation played out how it did.

Left tackle Joe Staley offered a similar sentiment, although he was clearly frustrated by discussion of Foster's situation in the wake of another disappointing loss.

"I have always had good interactions with Reuben," Staley said. "It just pisses me off that we're sitting here talking about this after a game. I wish we could talk about football. That's my thoughts."

Foster's latest arrest follows a string of off-field incidents involving the Alabama product. He pleaded no contest to a misdemeanor weapons charge related to the initial domestic violence allegations and was arrested for misdemeanor marijuana possession in January in Alabama.

Foster was sentenced to two years' probation, 232 hours of community service and $235 in fines for the weapons charge, and he completed a first-time offender diversion course to have the marijuana charges dropped. Those issues resulted in his being suspended for the first two games of the season for violations of the league's policies on personal conduct and substance abuse.

"He was really taking some very positive steps and maturing in a really nice fashion," Lynch said. "Unfortunately, in life, there's consequences for your actions, and when you show bad judgment, particularly after something has been communicated very clearly what the expectations are, there are consequences. And I think one lesson I've learned being around this league now for almost 30 years in different capacities is that no one is bigger than the team. That's ultimately what this decision came down to for us."

Foster's time with the Niners will end after he appeared in 16 games over two seasons since the organization chose him with the 31st overall pick in the 2017 NFL draft. In that time, Foster had 101 tackles and three pass breakups.

Heading into Sunday's game against Tampa Bay, Foster was dealing with a hamstring injury that had him listed as questionable on the injury report. He missed the previous two games with that injury.

Foster's off-field issues began before the Niners drafted him; there was a run-in with a nurse at the hospital at the scouting combine in Indianapolis in 2017 and a positive test for a diluted drug test sample that placed him in the NFL's substance abuse program before he entered the league.

Despite those issues, the Niners decided to move back into the end of the first round to draft Foster, a move Lynch said Sunday that he doesn't regret, even though it didn't work out.

"But at the same time, you can't play scared. You've got to trust your evaluations and remember back, and I'm not making an excuse, but we sit in these draft meetings, and there's a lot of information that comes out on these kids, and like I said, they're fallible. His wasn't nearly as bad as a lot of them. Ultimately, we have to own it, and I own it. I think most of all it's just disappointment."