From prison to the pros: Aaron 'Showtime' Taylor has his Warriors moment 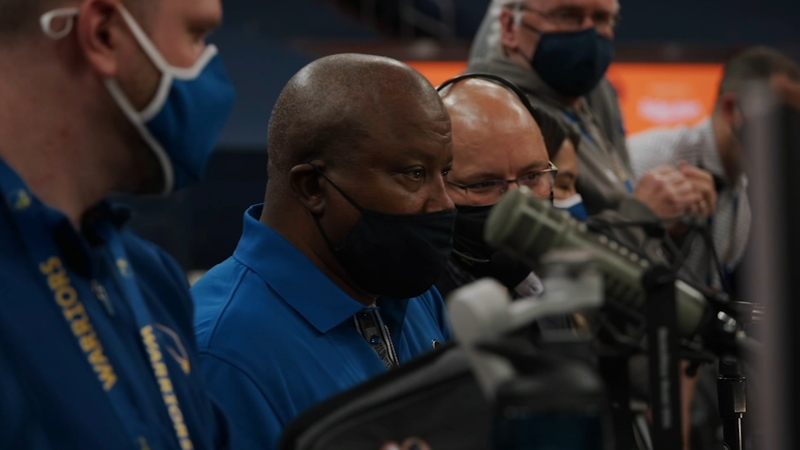 SAN FRANCISCO (KGO) -- Aaron Taylor had been dreaming about this moment for years. And he had plenty of time to dream while he was a prisoner at San Quentin. In for 26 years for armed robbery, the path from prison to Chase Center started with a microphone behind bars.

We first met the man nicknamed "Showtime" in 2017, when a group of Warriors staff invited us to join them for a basketball game inside San Quentin Prison. "Showtime" put on his own show from the sidelines, calling all the action in his signature style.

When ppl don't believe I worked with @LarryBeilABC7 then I produce the underground prison footage to prove it pic.twitter.com/bU7YlibCqq

Taylor first started calling prison yard basketball games shouting from the sidelines. His play-by-play helped keep tempers from flaring. Eventually he was given audio equipment to take his calls to the next level.

"I'm the rebirth of (legendary Lakers play-by-play man) Chick Hearn," Taylor said. "If you're wondering what Chick Hearn would look like if he came back as a 55-year-old Black man, you're looking at him."

Showtime's act got the Warriors attention, and six months after he was released on parole he was invited to be the guest public address announcer for the night at Chase Center.

"It's incredible," Warriors forward Draymond Green said. "To see him get his second chance... that was a dope moment for sure."

Part of the dream few would have expected is the connection Warriors players developed for Taylor. Stephen Curry even invited him to join him for the postgame interview in a surreal moment.

When you heat up @ChaseCenter, we’ve got to cool you down.

Think about being locked up since 1994, wondering if you were going to die in prison, and then getting this opportunity. It was emotionally overwhelming.

"The night before I was getting on the plane, I actually cried three times in the middle of the night," Taylor said. "Its fun to be here, but I was understanding the weight of the pressure. Look I'm formerly incarcerated and I've been given this opportunity in 6 months. And that was weighing on me."

It was one night with the spotlight on. One night of a dream coming true. One night that can lead to a new journey in life. But Showtime Taylor has not forgotten where he came from.

"In the end right now, I'm still an ex-con on parole living in a transitional home," Taylor said. "I just happened to have the best 3 days of my life right now, but when I catch a plane to go back home, I am going back to the transitional home because I still have a responsibility to the state. It's not a putdown to me. It's how I stay grounded."
Report a correction or typo
Related topics:
sportssan francisconbagolden state warriorsbasketballsportschase centerstephen currydraymond green
Copyright © 2021 KGO-TV. All Rights Reserved.
More Videos
From CNN Newsource affiliates
TOP STORIES