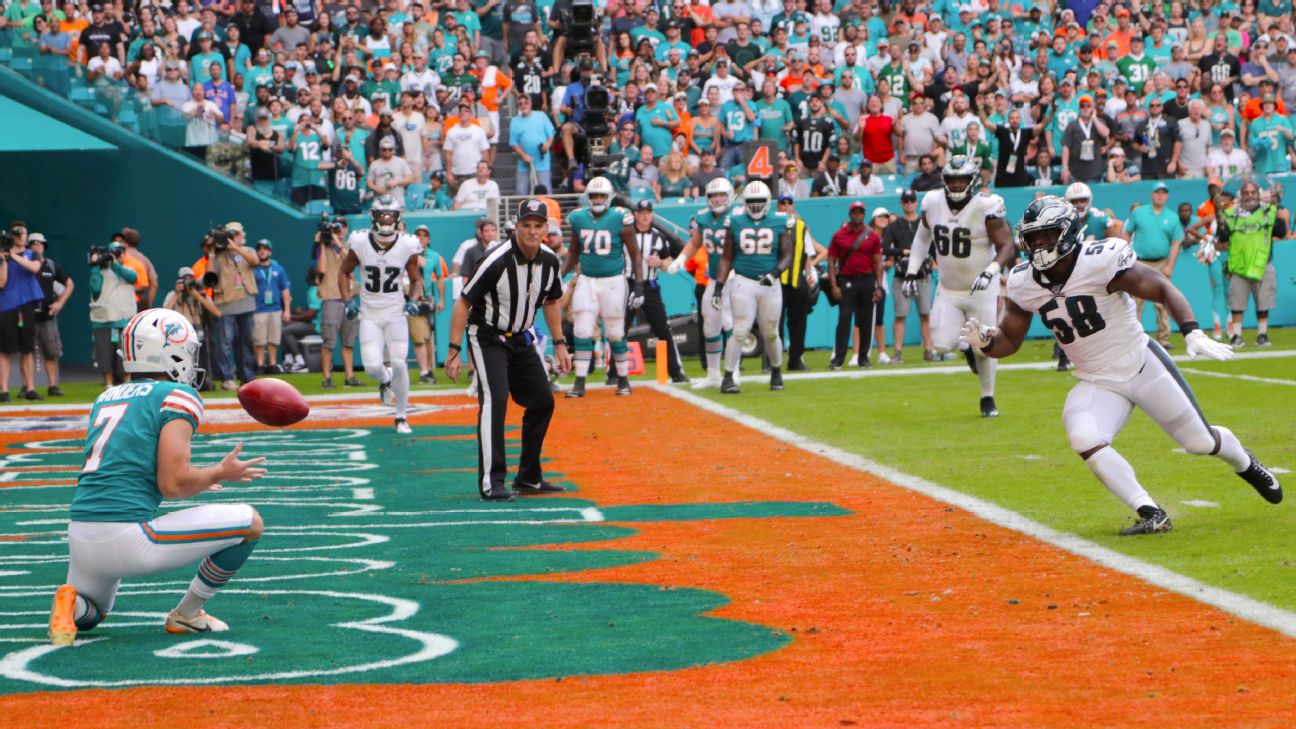 From the Miami Dolphins' place-kicker scrambling wide open to receive a touchdown pass to the Houston Texans' quarterback catching a pass and diving into the end zone, there were several trick plays that wowed NFL fans during the 2019 regular season.

ESPN's NFL Nation selected six incredible plays that caught fans -- and each of these team's opponents -- off guard, and then inquired from each team the origin of the plays. Here are their stories behind the most notable plays, which do not include flea-flickers or TD passes from quarterbacks, ranked in no particular order:

The play: On fourth-and-goal, the Dolphins sent out their field goal team, then audibled into a unique formation with center Daniel Kilgore snapping to Haack and the other nine players split wide on either side. When the ball was snapped, Haack scrambled to his left and Sanders slid behind the defense in the end zone. Haack pitched a shovel pass to Sanders, who slid to the ground and caught the touchdown.

The quote: "Kickers and punters are people, too. They are athletes, too. I'm tired of them getting disrespected. Those guys are athletes. It was good to see those guys have a little fun. I was happy for those guys. So now Haack is officially the best quarterback on the team and the best receiver goes to Jason. They are 100% on passes and catches, so it was good to see that," said Dolphins rookie defensive tackle Christian Wilkins, who was an eligible receiver on the play.

The story behind it: The play was titled the "Mountaineer Shot" in honor of Kilgore, the Appalachian State Mountaineers graduate who snapped the ball and distracted two defenders as he blocked. The Dolphins practiced it for two months, Dolphins players said. Miami QB Ryan Fitzpatrick thought special teams coordinator Danny Crossman was taking a big chance when he first saw it practiced. Fitzpatrick figured the Dolphins would never run it in a game, and if they did -- it wouldn't work. But he was pleasantly surprised.

The play took advantage of the Eagles' aggressiveness as three defenders attacked Haack while Sanders slid behind them to get open for the touchdown. It was the first time a team's leading punter and kicker combined for a passing touchdown since December 1964. -- Cameron Wolfe

The play: On first-and-goal midway through the fourth quarter, running back Duke Johnson took the handoff from Watson, and then handed it off to Hopkins, who was hit right as he pitched the ball back to Watson. Watson took the ball six yards and dove into the end zone to give the Texans a 28-9 lead over the Patriots.

The quote: "I think they drew that one up in the dirt over the bye week, and they brought it in," coach Bill O'Brien joked after the game. "They had it on a piece of notebook paper and they handed it to me. We've been working on that for a while."

The story behind it: About a month before the Texans ran the play, Watson and backup quarterback AJ McCarron were watching film of an old Chicago Bears game when they saw the Bears run a trick play. Watson said the pair thought it could work in a game, so they "threw it out" to offensive coordinator Tim Kelly and O'Brien.

O'Brien said the Texans worked on the play for a long time in practice, and when they ran it, they didn't even get the exact look they had hoped for. But Watson said he knows "Hop like the back of my hand," and knew they would make it work. -- Sarah Barshop

The play: The Patriots' inconsistent offense was in need of a spark, and coordinator Josh McDaniels gambled that running a double pass at the 15-yard line -- a play that is usually more effective with more space -- would pay off. So, Patriots quarterbackTom Brady would throw to his right to Edelman, who then had a couple options on what to do from there. Edelman could have thrown back across the field, but with Eagles safety Malcolm Jenkins pressuring him, he delivered a strike over the middle to Dorsett for a touchdown.

The quote: "Keeps his quarterback rating up there pretty high. Sure he'll have to ice his shoulder down and massage it," said Patriots coach Bill Belichick, who commented on Edelman's throw.

The story behind it: The double pass has a special place in the Patriots' history of success, most notably coming through for them in one of their most exciting comebacks ever -- a 35-31 victory over the Baltimore Ravens in the divisional round of the playoffs Jan. 10, 2015. In that game, Edelman connected with wide receiverDanny Amendola on a 51-yard double-pass touchdown. Belichick noted that the team had used something similar all the way in 2001 against the Colts. So it is practiced regularly with Patriots players, especially with Edelman, who was a quarterback in college at Kent State. -- Mike Reiss

The play: With 6:08 left in the second quarter at New Orleans' 35-yard line, 49ers quarterback Jimmy Garoppolo took the snap and handed it to receiver Deebo Samuel, who was coming across the formation from Garoppolo's right. Sanders circled in the opposite direction and received a lateral from Samuel as Saints linebacker Craig Robertson closed in on a blitz. Sanders evaded Robertson and flung a pass down the right sideline as he fell backward. Mostert caught it cleanly at New Orleans' 13 and raced into the end zone for a touchdown.

The quote: "We ran it like five times [in practice]," Sanders said. "The last time we ran it, I actually threw a duck. I was like, 'man, don't throw a duck in the game because that will be on ESPN Not Top 10.' I know [coach Kyle Shanahan] was like, 'please, do not throw a duck again.' It felt good. It was one of those plays coming into the game that we wanted to be a touchdown."

The story behind it:Shanahan said he had seen the play run a few times over the years, and it came up again in a conversation with Jets coach Adam Gase a couple of weeks before the Niners played the Saints. Gase told Shanahan that the Jets had run that play and then San Francisco passing game coordinator Mike LaFleur saw Buffalo run it for a touchdown the week before. So, while the Niners practiced in Bradenton, Florida, before the game in New Orleans, they installed it. Shanahan said the play didn't look too good in practice as Sanders struggled to deliver a good pass, but he had seen Sanders throw well before, so he trusted him to pull it off. -- Nick Wagoner

The play: It was fourth-and-10 from the Cardinals' 36-yard line with 8:39 left in the game, and Arizona had the ball. The Cardinals were down 23-20 when they ran a fake punt. The ball was snapped to linebackerZeke Turner, who ran left and flipped the ball to wide receiverTrent Sherfield, who was crossing back right. Sherfield then flipped the ball to Lee, who completed a 26-yard pass to Cooper. Arizona scored a touchdown three plays later.

The quote: When the play was initially introduced during meetings, special teams coordinator Jeff Rodgers said "Andy" would throw the pass. Cooper was confused. "I said, Andy Isabella?" Cooper said. No, Rodgers said, it was Andy Lee. "OK, OK, OK, it might work now," Cooper said. When Cooper ran his wheel route, he noticed the Bucs' outside cornerback was looking inside. "I guess he kind of just forget about me, like he was too focused on what was going on with the pitch," Cooper said. Once the cornerback looked back at Cooper, Cooper was already past him and the ball was in the air. "He wasn't even looking at me," Cooper said. "He was still confused at that point."

The story behind it:Rodgersexplained the play to Cooper and Lee a couple weeks prior to the Week 10 game with the plan to run it after Arizona's Week 12 bye, Lee said. During meetings, the play was named "Pharoh" in anticipation of Cooper taking the pass to "Egypt for the touchdown," Cooper said.

Rodgers was about 15 yards away from Lee when he called the fake punt. It took Lee a moment to realize what the call was. "I was like, 'Oh, that's the pass,'" Lee said. The play was repeated a handful of times in practice, but the key to it working in the game was whether the defense would follow Sherfield after he pitched the ball back to Lee. If the defender followed Sherfield, Lee knew he'd have time to throw it. If the defender peeled off and chased Lee, Lee knew he would have to rush it. Fortunately for Lee, the defender followed Sherfield, giving him enough time to throw the longest pass of his career. -- Josh Weinfuss

The play: Bills quarterbackJosh Allenreceived the snap and handed the ball off to receiver Andre Roberts, who then tossed it to Brown on a double reverse. Brown then found Singletary wide open downfield for a 28-yard touchdown.

The quote: The play nearly didn't happen. "[Brian] Daboll's an aggressive playcaller. He told me in the headset if it's zone, get out of it -- but the headset cut off before I could hear that. It was zone and John Brown made a great play," Allen said.

The story behind it:Bills offensive coordinator Daboll said the trick play was one of the many things the team fooled around with during organized team activities and training camp, but the decision to run the play came when he saw Brown throw a ball into the stands when the team played Miami a few weeks earlier. Daboll made the call six plays after Buffalo's defense strip-sacked Cowboys quarterbackDak Prescott and one play after Allen converted a fourth-and-1 run. The result gave the Bills a 13-7 lead just before halftime -- a lead they would not relinquish. -- Marcel Louis-Jacques 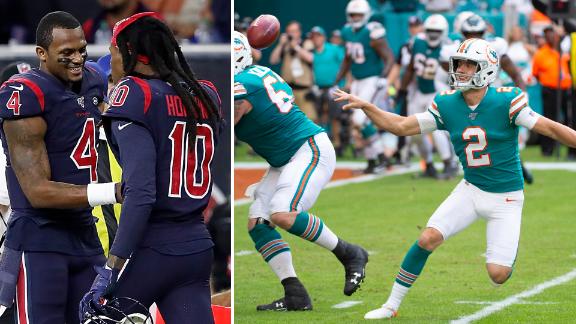