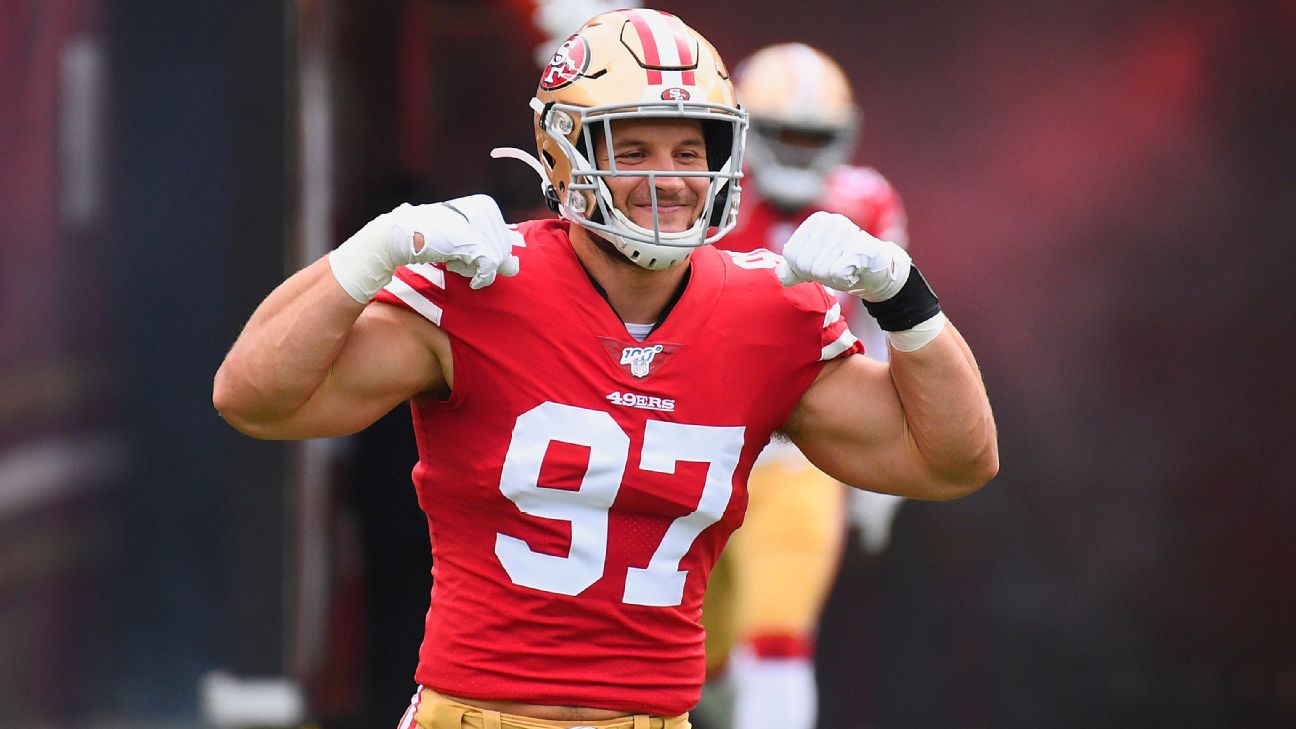 ESPN
By Nick Wagoner
SANTA CLARA, Calif. -- As many of his friends at St. Thomas Aquinas High School in Fort Lauderdale, Florida, were working toward their diplomas and pondering where to go to college, Nick Bosa was already working on his education in pass rushing.

The son of former NFL defensive end John Bosa and younger brother of star Los Angeles Chargers end Joey Bosa, Nick Bosa was well on his way to an undergraduate degree in the art of pass rushing. But it wasn't until Nick started visiting his brother Joey at Ohio State that the younger Bosa entered into the advanced curriculum.

His teacher? Buckeyes defensive line coach Larry Johnson, the pass-rushing equivalent of a professor emeritus, with 23-plus years of experience coaching some of the best defensive linemen in college football.

Thanks in part to those lessons, Bosa came to the San Francisco 49ers as the No. 2 pick in the NFL draft with a complete, polished game that has instantly translated to success on Sundays. Bosa has helped transform the Niners' defense into one of the league's most dominant.

Entering Thursday night's game against the Arizona Cardinals (8:20 p.m. ET, Fox), Bosa has 20 tackles with 11 for loss, 13 quarterback hits, seven sacks, a forced fumble, a fumble recovery and an interception. Those numbers, impressive as they are, don't tell the full story.

According to NFL NextGen Stats, Bosa's 23.2% disruption rate -- which includes the numbers of quarterback pressures, hurries and sacks a player has divided by pass-rush snaps -- is first in the NFL, not just among rookies but among all defensive ends to have played at least 100 snaps. When Bosa isn't getting sacks, he's forcing quarterbacks off their spot, which has led to nine sacks for his teammates, fifth in the league.

"I love Nick," cornerback Richard Sherman said. "He's a kid and he plays like a grown man."

A master class in pass rush

Not long after Joey Bosa opted to attend Ohio State in 2013, Nick made up his mind that he too wanted to be a Buckeye.

After Johnson arrived at Ohio State in 2014, Nick would find himself in Johnson's office whenever the family would visit Joey in Columbus. There, Johnson began showing Nick the finer points of rushing the passer, going through tape in detail and talking about technique. Nick Bosa was intent, even as a junior and senior in high school, on expanding his repertoire of moves before enrolling at Ohio State.

"Then once he got here, he continued to build on those things every year," Johnson said. "He's got great leverage, great hips, can bend. Those things are very natural for him, and then it's just a matter of giving him some things to put in his toolbox."

Where Joey Bosa had to be molded a bit more, Johnson's time spent with Nick while he was in high school made for an easier transition. Johnson's lessons for Nick focused on things like understanding leverage and how to win individual battles. Johnson compares the art of pass rushing to playing a one-on-one game of basketball. He emphasized that a great pass-rusher doesn't have to have a thousand moves, he just needs to know what his opponent can and can't handle and adjust accordingly. And if one move works consistently? Keep using it.

Ask Nick Bosa about all that goes into pass rushing and his eyes light up. Bosa loves talking about his craft, but just as he draws close to offering some insight into how he does it, he pulls back.

"It's a secret," Bosa said. "I feel like my approach -- which I'm not telling you guys about -- is going to be the same because it works."

The closest Bosa comes to revealing any of his secrets is to say he will often spend parts of the game getting a feel for what his opponent's weaknesses are and then pick his spots to throw what he calls his "fastballs" later in the game. The only other thing he will reveal: He often tries to play with power right away, see how his opponent reacts and adjust accordingly.

And, of course, Bosa keeps in touch with Johnson, who watches tape of both Bosas and his other pupils each Wednesday night and then shares thoughts on what he sees. Joey Bosa is another resource for his brother; they remain in constant contact throughout the week.

Asked if he believes his brother entered the league more polished than he did, Joey Bosa doesn't hesitate.

"I would definitely say so at this point of his career," Joey Bosa said. "For sure."

As Nick Bosa and the Niners attempt to chase down Arizona quarterback Kyler Murray on Thursday night and for the foreseeable future, Cardinals fans might look at Bosa and wonder "What if?"

Arizona held the No. 1 overall pick in the 2019 draft and could have gone with Bosa. In fact, had it not been for Murray forgoing baseball and entering the draft, there's a strong chance Bosa would have ended up in the desert.

"I loved him as a player," Cardinals coach Kliff Kingsbury said. "I'd love to go to the club with him. You know he's one of those guys. He's gonna have fun wherever he's at. And he's an absolute beast on the field. [He was] one of our favorite players in the draft, on and off the field."

While Kingsbury and the Cardinals acknowledge that they "fell in love" with Bosa, they ultimately opted for Murray, largely because he was the perfect fit to run Kingsbury's offense.

Once they did, there was no longer a question about what the 49ers would do with the second pick.

Before drafting Bosa, the Niners had traded for and then signed speedy edge rusher Dee Ford to pair with twin towers tackles DeForest Buckner and Arik Armstead. They envisioned Bosa as the ideal, powerful complement to Ford. Likewise, Bosa believed he'd fit well with the others and the Niners were much closer to competing than their draft position would indicate.

"He's happy to be a 49er, I can tell you that," Johnson said. "As soon as it happened, he said, 'Coach, that's where I want to go.' That's all you need to know, right? He's walked into a great situation."

That situation has improved since Bosa recovered from a high ankle sprain suffered in training camp. Bosa has been on the field more and proved a "pleasant surprise" in terms of defending the run, according to defensive coordinator Robert Saleh.

Therein lies the biggest reason the 49ers believe Bosa is a foundational player: He already has showed great polish, but he's far from a finished product.

"He is just now tapping into his ability," Johnson said. "A lot of people don't realize that Nick is a fierce competitor. He wants to be the best. That's what drives him." 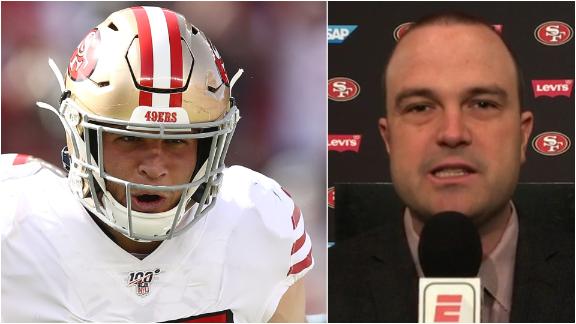