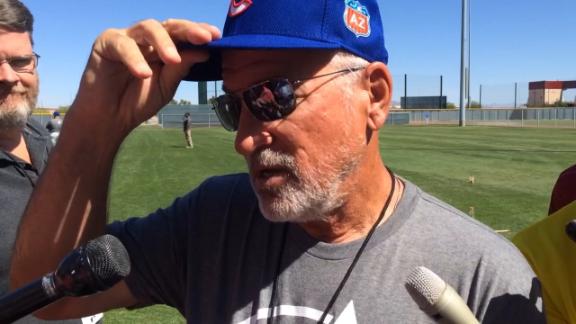 MESA, Ariz. -- All systems are go for National League Cy Young award winner Jake Arrieta to make his Opening Day start next Monday against the Los Angeles Angels after he left his last spring outing early with a blister on his pitching thumb.

Arrieta threw 46 pitches in a bullpen session Sunday morning. He and his manager declared him ready to go.

"He was fine," Cubs manager Joe Maddon said. "No restriction whatsoever. He felt great. It was like it never happened. I anticipate no problems."

Arrieta got hit hard in one-third of inning Thursday against the San Francisco Giants, giving up five runs before being pulled. He said he felt the blister in the bullpen warming up, so he knew he might have some troubles. After the game, he showed his thumb to reporters.

He'll make his final spring start on Tuesday against the Oakland Athletics, where he might increase his pitch count in order to make up for his short outing against the Giants.

Maddon confirmed he'll start next Monday, then officially named the rotation for the rest of the weekJon Lester will pitch the second game against the Angels, followed by John Lackey against Arizona in Game 3. Jason Hammel and Kyle Hendricks will round out the first turn through the rotation.