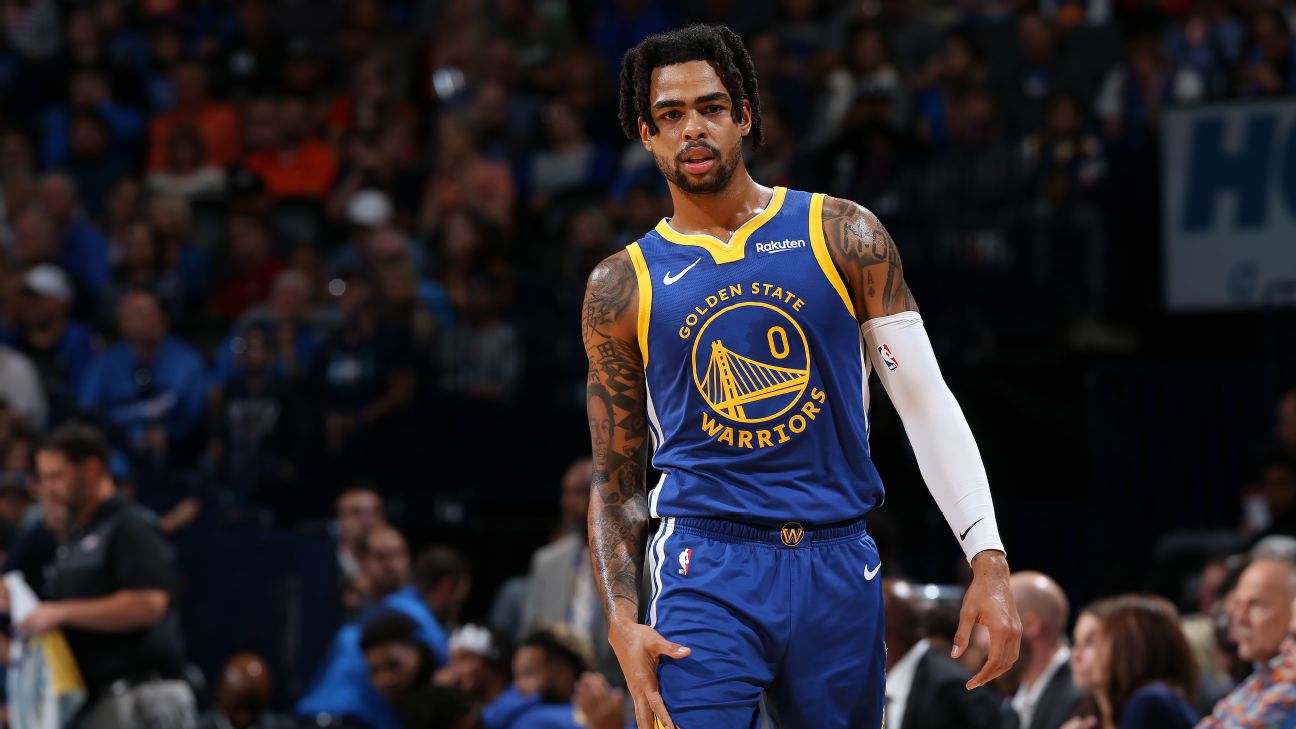 OKLAHOMA CITY -- For the first time in his NBA career, Golden State Warriors guard D'Angelo Russell was ejected from an NBA game during Sunday's 120-92 loss to the Oklahoma City Thunder.

The play occurred with 7:12 left in the quarter as Russell drove to the rim and hit a floater over Thunder guard Chris Paul. Russell thought he was fouled and jumped off the floor and right into referee James Williams' face. He was immediately given one technical and hit with a second a few moments later.

"I'm not sure," Russell said while discussing the play. "I'm sure you guys seen it. It's a touchy subject to comment on whatever it was, but emotions got the best of me."

Warriors coach Steve Kerr said he spoke to Williams about the incident but did not get into specifics.

"I talked to James afterwards, and he explained what was said between them, and that will remain private," Kerr said. "It is what it is."

The larger issue for the Warriors is that Russell, who was acquired from the Brooklyn Nets after Kevin Durant left in free agency, is struggling to find a rhythm with his new team. The 23-year-old is 9-for-26 in his first two games.

"It's just going to come with time," Curry said. "We've done certain things for so long, and he's seen it, and he knows how he can plug himself into it. He has a very unique style as well. It's just blending the two and figuring out what our certain pet playcalls are, understanding it's not just him, but we have other new guys trying to figure out our patterns.

"We're not there yet. It's just going to come with time, and we've got to make sure we don't let go of the rope before we even have a chance to establish ourselves. These first two games have been terrible. We understand that. Eighty more to go."

Kerr, who has been known to have a quick trigger at times, said he wasn't disappointed by Russell's actions Sunday.

"No, there's frustration all around," Kerr said. "I get frustrated with officials, and I can't lecture anybody on keeping composure. That would be ironic. Stuff happens."

Curry noted his respect for Russell's never before being tossed in a game before adding that he hoped the young guard would leave the emotions of the moment behind him and move forward.

"I've been there before, too," Curry said. "Sometimes you get a little frustrated, and you want to let it out. We don't want that to be a pattern, so leave that here in OKC and keep it moving."

The Warriors are hoping that they can leave a lot of their recent bad habits in Oklahoma City as well. Just three days after giving up 141 points in a loss to the LA Clippers, Green and the Warriors thought they would have a better showing against a Thunder squad that is in the midst of a transition of its own. After looking lifeless on both ends to start the game and falling into a 70-37 hole by halftime, the Warriors were left to wonder how to fix the offense and defense that propelled them to so many highs over the past five seasons.

"I would like to see us play harder," Draymond Green said. "That will help a little bit, but the reality is we f---ing suck right now. And hopefully we'll get better. We'll continue working at it and try to get better, but we're just not that good right now. I don't know what better way to frame that for you. I could try it in Spanish, but I ain't really that good in Spanish. That's really the best way I could tell it to you right now."

The Warriors knew it was going to be an adjustment to integrate so many new faces into the roster after losing Durant in free agency and veteran stalwarts Andre Iguodala and Shaun Livingston, but the way the Warriors looked Sunday is the way they've looked for weeks. They struggled in the preseason to find any kind of defensive rhythm, and those problems have manifested when the games actually count.

"This is not easy," Kerr said. "What we did the last five years was not easy, but there's a reason it worked. We had a lot of talent. We had a lot of guys who are really, really smart basketball players, so the whole point is to bring these young guys along, help them get better every day and form a team and develop an identity so we can start winning some games."

Curry echoed that sentiment, displaying a sense of calm as the Warriors draw criticism from all corners after a lopsided start. The two losses mark the first time since 2009-10, Don Nelson's last season, that the Warriors have started 0-2. The Warriors' minus-47 point differential through two games is the worst in NBA history by a team to reach the NBA Finals the previous season, according to the Elias Sports Bureau.

For a group that has dominated for so long, the reality of the situation has been tough to stomach.

"It's not a good feeling, but as a competitor that has expectations like I do, like we do, that have been through this before, two games is not going to deflate you," Curry said. "Out there on the bench, it's kind of a weird feeling."

Kerr, Curry and Green all agreed that the group's biggest issue was on the defensive end. The fourth quarter of Sunday's game marked the first quarter in two games in which the Warriors didn't give up 30 or more points, and that was only because the game was so far out of hand that both teams cleared their respective benches. Green noted that a lot of the reason the Warriors have had struggles early is that the younger players still haven't learned where to be on the floor yet.

When asked at what point he would start to worry if the younger players continue to struggle defensively, Green noted that it isn't his role to make decisions about the roster.

"That's not really my job," he said. "My job is to go out there and play and try to help lead, and I haven't done a great job of that. So I got to be better in my area. But I'm not the guy to make decisions and say, 'They're just not getting it.' It's two games. It sucks, and I know everybody's used to seeing us win. I'm for damn sure not used to losing like this. But we're not giving up on anyone after two games. Nor are we giving up on ourselves -- although we do suck. I did say that. That's true. We're not giving up on ourselves. Got another game tomorrow. Try to figure more out then."

The Warriors are hoping they can keep things moving heading into Monday's contest against the New Orleans Pelicans. Green and Curry are trying to keep things in perspective as they face the kind of adversity that was rarely seen throughout the group's championship reign.

"I think just about everybody except Tim Duncan has been through it," Green said. "It sucks pretty bad ... I didn't have this feeling, that it'd be like this. You kind of figured s--- won't be the same, but I didn't think we'd be getting our ass kicked like this. It's pretty bad."

Kerr tried to keep his sense of humor when asked if he were looking forward to getting his team back on the floor on the second night of a back-to-back.

"I'm looking forward to the Modelo that's waiting in my locker," he said. "And then yes, I'm looking forward to getting to New Orleans and playing again. This league is all about turning the page. There's so many games. I thought we got better in the second half. We have to look for our incremental improvement and try to build on that. So hopefully we can do that tomorrow." 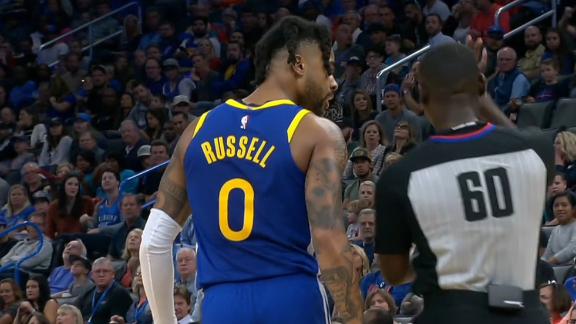 Russell ejected after arguing with ref
D'Angelo Russell angrily disputes a play with a referee and gets two technical fouls in the third quarter. 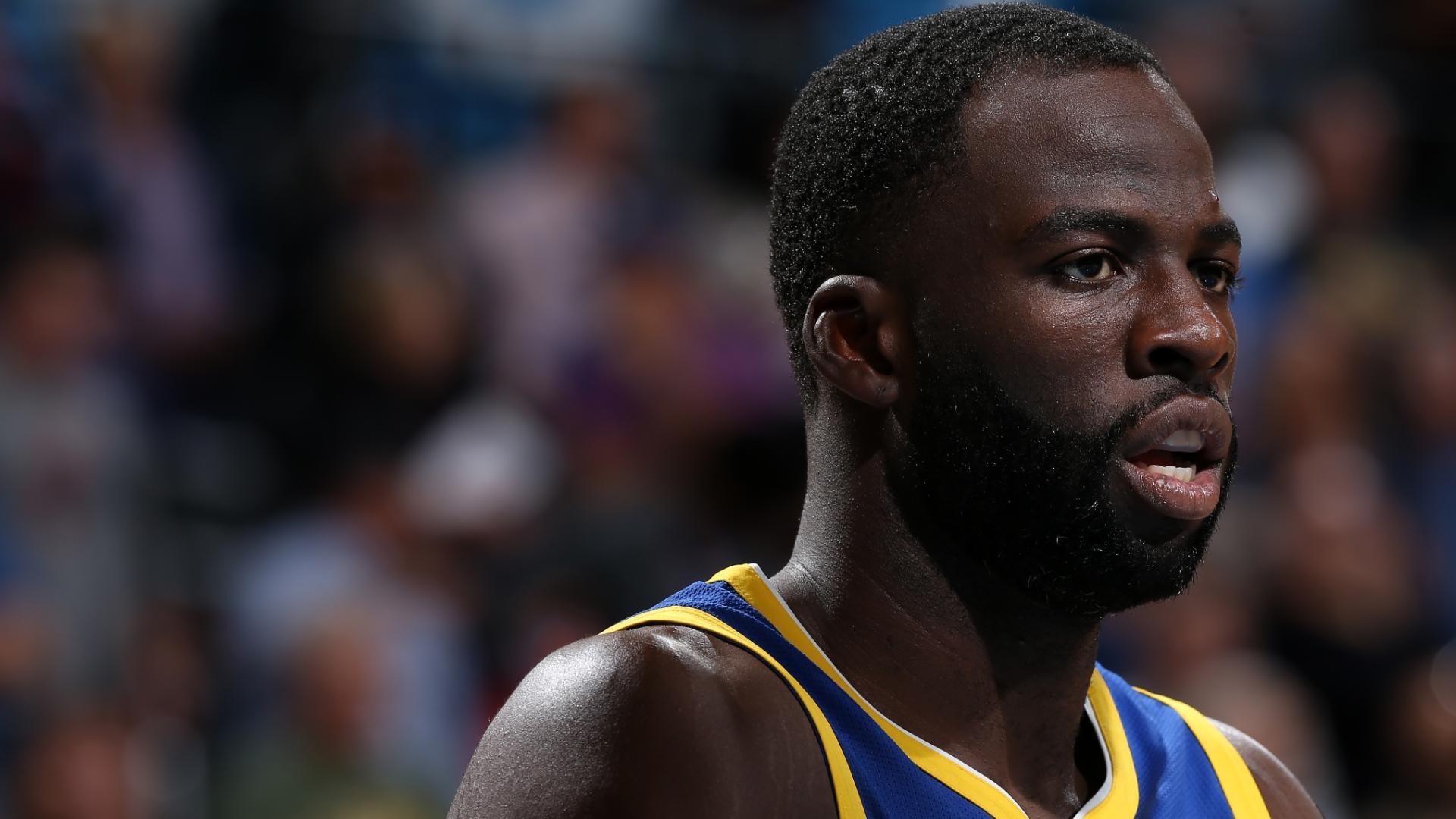 Warriors dominated by Thunder
The Warriors' struggles to start the season continue, as they fall to 0-2 after getting blown out by the Thunder 120-92. 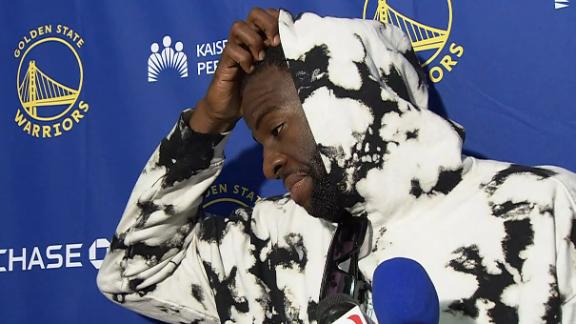