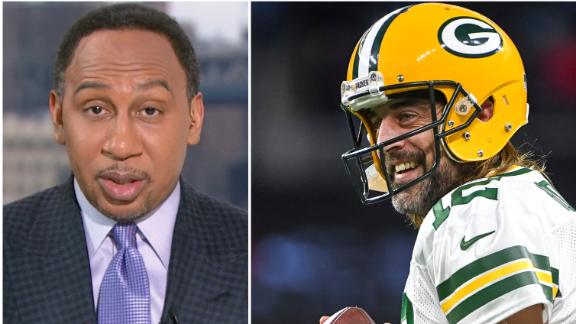 
OPENING LINE: Packers by 6, according to .

TURNOVER DIFFERENTIAL: 49ers minus-4; Packers plus-13

49ERS PLAYER TO WATCH: WR Deebo Samuel. The All-Pro wideout had a season-low 52 yards from scrimmage - including zero yards rushing -- against the Packers back in September but has since emerged as much more of a multipurpose threat. He had 1,405 yards receiving, 365 yards rushing and 14 total touchdowns in the regular season. Samuel rushed for 72 yards and a touchdown on 10 carries and also had three catches for 38 yards against Dallas.

PACKERS PLAYER TO WATCH: QB Aaron Rodgers. He threw 20 touchdown passes without an interception over his final seven games to emerge as a favorite to win his fourth MVP award. Now he has a chance to improve upon his so-so 11-9 playoff record as a starter, which includes an 0-3 mark against the 49ers.


KEY MATCHUP: Packers OT David Bakhtiari vs. 49ers DE Nick Bosa. This is based on the assumption that Bakhtiari actually plays. Bakhtiari, a 2020 All-Pro, tore his anterior cruciate ligament on Dec. 31, 2020, and finally returned to action by playing 27 snaps in the Packers' regular-season finale. He's listed as questionable for Saturday's game. The Packers have been cautious with him in practice the last couple of weeks. Bosa, who recorded 15 sacks during the regular season, sustained a concussion against Dallas. Bosa has 4 sacks in four career playoff games. Bosa was removed from the 49ers' injury report Friday after clearing concussion protocols.

STATS AND STUFF: The winner of this game faces either the Tampa Bay Buccaneers or Los Angeles Rams in the NFC championship game. The Packers would play the NFC championship game at home, while the 49ers would have to go back on the road. ... The 49ers are coming off a five-sack performance against Dallas. Charles Omenihu had 1 sacks in that game. ... 49ers K Robbie Gould is 18 of 18 in career playoff field-goal attempts, the most makes ever in the postseason without a miss. Gould made kicks of 53, 52 and 40 yards against Dallas. ... The 49ers have won their last four divisional-round playoff games (during the 2011, 2012, 2013 and 2019 seasons). Three of the four wins were at home. Their last loss in this round was a 31-6 defeat at Tampa Bay during the 2002 season. ... The Niners have averaged 195.3 yards rushing per game in four playoff games under coach Kyle Shanahan. ... San Francisco QB Jimmy Garoppolo has averaged 149.8 yards passing per game with four INTs and two TDs in four playoff starts. ... The Packers are seeking to reach the NFC championship game for a third straight season. They haven't made it to the Super Bowl since their 2010 championship season. ... The last two times he has faced the 49ers, Packers WR Davante Adams has caught a total of 22 passes for 305 yards. He has scored a touchdown in each of those games. ... Rodgers has thrown multiple touchdown passes in an NFL-record nine straight playoff games. ... The Packers are 11-10 in divisional playoff games, including an 8-1 home record. The home loss came to the eventual Super Bowl champion New York Giants in the 2011 season. ... The 49ers are 33-21 and the Packers are 36-24 in postseason games. Only the New England Patriots (37-22) have a better postseason winning percentage. The Packers' 36 postseason wins put them in a tie for second place with the Pittsburgh Steelers, one behind New England. ... 49ers coach Kyle Shanahan and Packers coach Matt LaFleur worked together as NFL assistants with Houston, Washington and Atlanta.