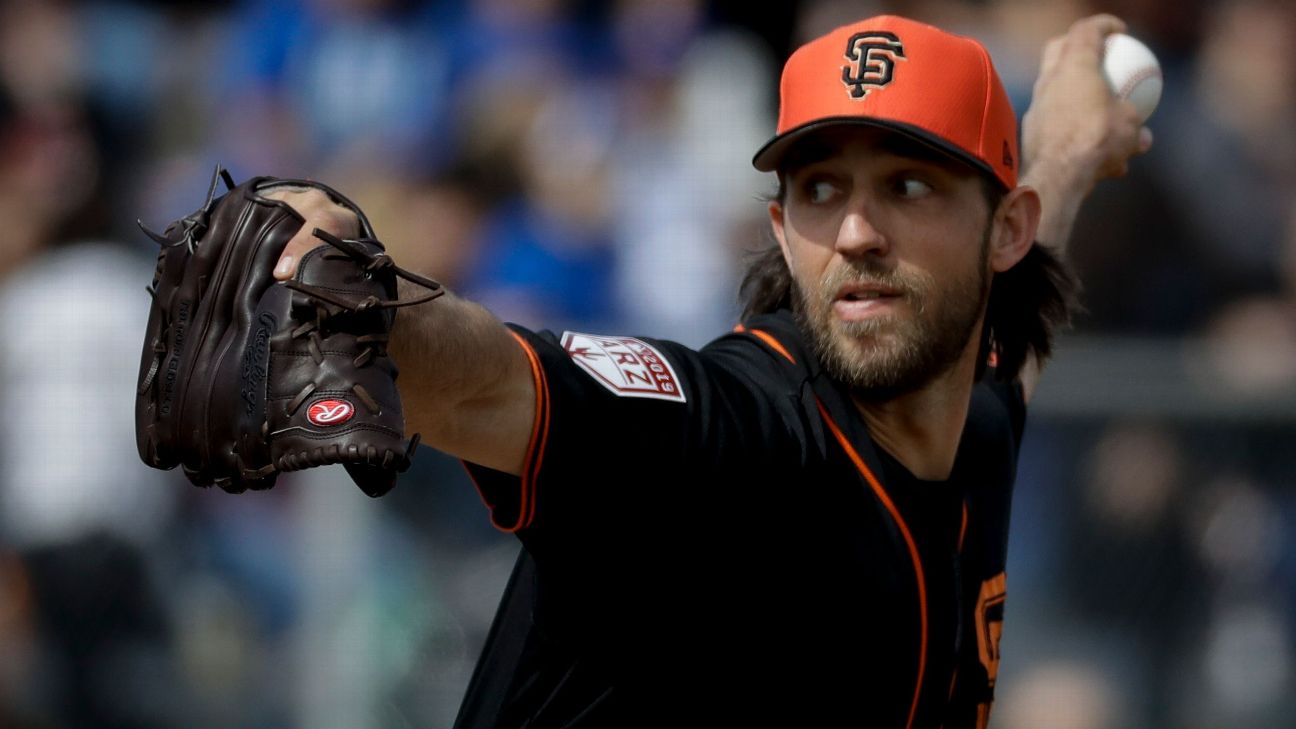 "It's been five months since I've faced a hitter," Bumgarner said Sunday. "I'd say that's the best I've felt, especially in a first spring outing, in quite some time."

Bumgarner was sharp in the first inning and retired the Chicago Cubs in order on eight pitches. He failed, however, to retire any of the six batters he faced in a 29-pitch second inning and all six eventually scored.

Kyle Schwarber doubled to open the second and Addison Russell singled before Bumgarner hit David Bote on the helmet with a pitch to load the bases. Bote dropped to one knee but was able to walk off under his own power.

"It was a weird play because the ball was not on top of him," Giants catcher Rene Rivera said. "It looked like his head was over the plate and that's when it hit it. It squared him up pretty good. He lost his balance and I tried to hold him a little bit."

Bote was examined by the Giants medical staff and was to be checked by the Cubs staff at the team's facility.

"Obviously, I don't want to do that," Bumgarner said. "That's terrible. ... I'm pretty good at compartmentalizing stuff and moving on to the next thing. That didn't affect me. I am sorry for it."

Bumgarner gave up three more hits -- although two were ground balls on plays that should've been made -- before he was lifted.

"He got ahead and allowed two-strike hits, a couple plays we didn't make," Bochy said. "It was one of those Cactus League innings. I was very pleased with where he was with his stuff. He got ground balls and they hit the hole a couple times. Overall, he got us where he could and felt great."

The 29-year-old Bumgarner is coming off back-to-back seasons during which he was slowed by injuries, making 17 starts in 2017 and 21 last year. He suffered a fractured left hand last March when he was hit by a line drive and said he's fully recovered from that injury and his grip feels strong. The radar gun showed one of his fastballs at 93 mph, which also is encouraging.

"I felt really good," Bumgarner said. "My command in the zone could be a little better and it's going to get better as we go here. For the first day, I was pretty excited about it. I felt good. A little tough luck with some ground balls there being just out of reach of some guys. It's weird to say but I'm not concerned about that at all. It's about how you feel, how you bounce back after the first inning and getting your work in."

"He wanted to keep the ball on the ground and he did," Rivera said. "He did exactly what we wanted. It was good placement for them."

Rivera knows a little about Bumgarner from his few at-bats against the 2014 World Series MVP.

"The last time I remember facing him was 2016 in the wild-card game and I was with the Mets," Rivera said. "He did a hell of a job, complete game. When it comes to an important game, he's going to be there."

Bumgarner threw a four-hit complete game in the Giants' win over the Mets, with Rivera getting one of those hits. The catcher also hit a three-run homer off Bumgarner on April 28, 2014, in the fifth inning of a 6-4 Padres victory over the Giants.

But that's in the past. On Sunday, Rivera and Bumgarner were on the same team.

"He's a pretty simple guy," Rivera said. "He just attacks the zone. Let's see what he's going to do."

Pablo Sandoval tweaked his side during Saturday's workout and will be shut down for a couple days, Bochy said. ... Joe Panik went 3-for-3, including a solo home run in the third, in the Giants' 9-5 loss to the Cubs. "I felt comfortable right from the first at-bat," Panik said. "Obviously, it's always a process in spring training but I was feeling a good rhythm at the plate, and that's all you can ask for." ... Buster Posey is not expected to catch until March 1 but could get at-bats as the designated hitter before that. Posey is coming off surgery to address a hip impingement and repair a torn labrum. He was expected to be ready by Opening Day.
Report a correction or typo
Related topics:
sportsespnmadison bumgarnermlbgiantssan francisco giantsspring debut
Copyright © 2021 ESPN Internet Ventures. All rights reserved.
TOP STORIES
SF mayor facing nearly $23K fine for series of ethics violations
LIVE: PG&E holds briefing on Public Safety Power Shutoffs
East Bay parents speak out against face masks at school board meeting
7 On Your Side investigates calamity at California EDD
US hits 70% vaccination rate -- a month late, amid a surge
SFGH to give supplemental mRNA vaccine to those who got J&J shot
More than 110M COVID vaccines sent to 60 countries, US says
Show More
Solano Co. health director defends not mandating masks
EXCLUSIVE: SJ businesses targeted by anti-maskers amid surge
Bay Area health officers issue new indoor mask mandate
Golden State Warriors' Stephen Curry gets 4-year, $215M NBA extension
NYC to require vaccination proof for indoor dining, gyms
More TOP STORIES News