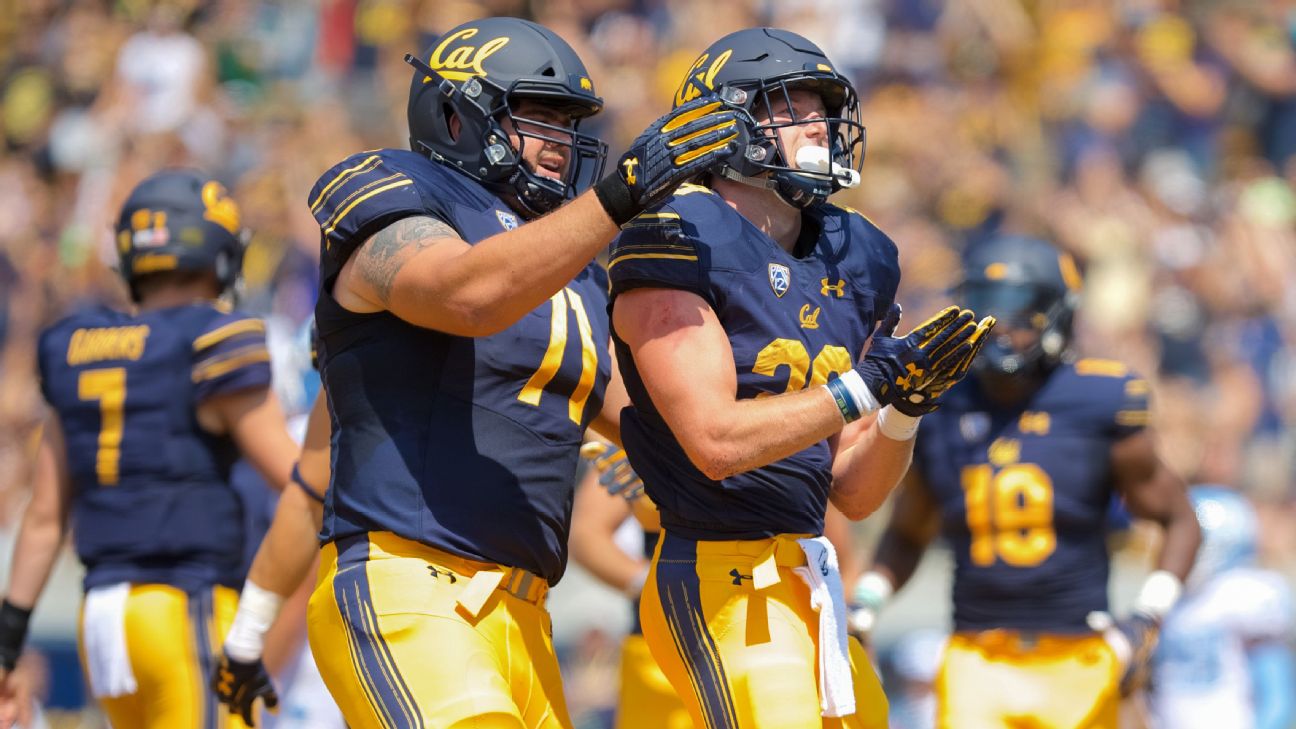 Patrick Laird took the handoff, bounced off a North Carolina defender, dove into the end zone and flipped the ball to an official. Then, he approached Section KK, in the southwest corner of California Memorial Stadium.

Laird looked down, put his hands together, then apart, as if to open a book. He then looked up, acknowledging the hundreds of kids he inspired to open books this summer.

College football is unscripted, but the first touchdown of Cal's season -- who would score it, where it would be scored -- had seemingly been penned to page months earlier. In April, Cal's starting running back and resident bookworm launched the Patrick Laird Summer Reading Challenge, which asked first through sixth graders to read four to six books, complete a reading journal and receive free tickets to Cal's opener.

"It was an incredible experience," said Laird, who spoke to the group after the game, took pictures and signed autographs. "It's just happenstance how I scored right in front of them and was able to run up and do the book celebration, and I saw some kids doing it. That was pretty exciting."

Laird's goal was to combat summer learning loss, a decline in the reading skills of elementary-school students while they're away from the classroom. More than 3,600 kids registered. Cal estimates about 1,000 turned in their journals, receiving tickets in Section KK for the UNC game.

"Everybody wins," Bears coach Justin Wilcox said. "He has a passion for reading, so it's fitting, but he also has concern and wants to help people, so this was his way. All of us would be better off to read a little more, learn a little more."

The reading challenge is the latest chapter in Laird's success story. The former walk-on is a second-year starter and two-time captain for No. 24 Cal, which hosts No. 19 Oregon on Saturday. Laird rushed for 1,127 yards last season, earned his business degree in May and is working toward a second major in political science.

Last Friday, he was named to the 2018 Allstate Good Works Team (Cal and Allstate surprised him as he spoke to a local middle school)

The roots of the reading challenge started in 2016, when Laird and his teammates/housemates brainstormed what each would do if he crossed the goal line. Someone suggested Laird read a book. They all had seen Laird reading the Wall Street Journal with his morning coffee and various books each night before bed.

Laird said nothing. He had only three carries in two seasons. That fall, he did the book-reading celebration after a touchdown against Washington, but few noticed during a blowout loss. Then, in the 2017 opener at North Carolina, Laird scored on a 54-yard reception.

"He doesn't tell anybody that's what he's going to do," said Michael Laird, Patrick's father. "Automatically, Suzi [Patrick's mom] and I say, 'He's reading the Bible, he's opening up the Bible!' And questioning him [later], he said, 'No, I'm just opening up a book.' I thought it was great.

When Patrick mapped out his final offseason, he needed a project. He wouldn't do a summer internship. Most of his time would go to training, practices and classes.

He began researching summer learning loss. Laird learned that it mainly affects lower-income students because they're less likely to be in camps or other summer programs that encourage reading.

Although kids from all backgrounds make similar gains during the school year, those experiencing summer learning loss fall incrementally behind, creating major gaps in middle school and especially high school.

"It's about a month-and-a-half of loss in reading skills," Laird said. "Teachers will spend about the first six weeks trying to reteach those kids. I had no idea that was a huge thing."

Reading was always a huge thing for Laird, who grew up along California's central coast as the fourth of six children. Television wasn't allowed on school nights, so after dinner, chores and homework, the Laird kids read. The eldest, Michaela, whom Patrick calls his "intellectual hero," became such an avid reader that she couldn't be sent to her room as punishment. Instead, she'd have a book taken away.

At 4, Patrick pretended to read chapter books. As Michael and Suzi read to him, Patrick memorized the words.

This winter, Laird pitched the reading challenge to Cal's athletic department. He hoped for one to two free tickets per sign-up. They offered four. Laird built a website, walkonthenrun.com, and announced the project in April.

"People were like, 'What if nobody signs up?'" Suzi Laird said. "And he said, 'If one kid signs up, I did my job. Two kids, great. Fifty, better.' He's made reading cool. And that's what's important to him."

Patrick created a contact page, thinking 5-10 schools would reach out. He ended up speaking at 23 schools and three summer camps. There was social media promotion (#ReadWithPat), and Laird interviewed Wilcox, athletic director Jim Knowlton, chancellor Carol Christ and acclaimed author and Berkeley resident Michael Lewis about their love of reading.

"We have kids who are starting behind, and they have more to catch up on," principal Mimi Melodia said, adding of Laird, "He was just great with the kids. He's directing his energy in such a positive way."

"He connects all the dots with reading, education, athletics, college," Knowlton said. "Many of these kids may never have been talked to about how college is possible for everybody."

Laird always asked students how they spent their summers -- beach, sports, video games -- and reminded them about finding time for reading. He told them there are reading muscles in their brains, and how "when you don't work out, your muscles get smaller."

The school visits were nostalgic for Laird. When kids mentioned how they love the "Dog Man" books, Laird saw that the author, Dav Pilkey, also had penned "Captain Underpants," which he loved as a kid. Laird exchanged emails with a second-grader starting the "Harry Potter" series, which he had also read in the second grade.

The challenge reached kids near and far. After Laird visited their school in Orinda, California, brothers Jackson and Ryan Wahlberg immediately registered for the challenge and went one step further: starting a book club that met at a local ice cream shop.

"The boys talked books for 30-40 minutes and ate ice cream and they thought book club was the greatest thing in the world," said Joakim Mahlberg, Jackson and Ryan's father. "Patrick did a terrific job engaging the kids."

Andrew Kim, a Cal alum living near Atlanta, learned about the challenge on Facebook and knew his 8-year-old son, Joey, would participate. They had attended last year's Cal-North Carolina game, and noticed Laird's book celebration.

As soon as Cal sent a reading journal, Joey started knocking out books. He completed the challenge in a week.

"I really like fiction, and I like to read a lot of big, fat books," Joey said. "I probably read a lot more this year."

Andrew was among the many parents who wrote Laird and thanked him. Several told Laird that their kids' reading scores have improved so far this year.

"The summer gets really busy and there's a lot of things kids can do," Kim said. "But reading is so critical in their lives. I like the fact he tried to inspire kids to ... make it a priority."

He's inspiring others, too. Laird exchanges books with Wilcox, who didn't grow up a huge reader but has grown to love it. While Cal players still love video games -- "No matter how much I tell them they're a waste of time," Laird laments -- more have recently asked for book recommendations.

"I didn't really read that much growing up, and definitely not over the summer," said linebacker Jordan Kunaszyk, a co-captain with Laird. "If this challenge was set up when I was young, I would have been all over it. That could have been the difference. He's changed the perspective of so many and their reading habits."

The reading challenge should continue in 2019, as Cal's business school is seeking a corporate sponsor to cover the tickets for participants. For now, Laird will provide reading reminders every time he crosses the goal line.