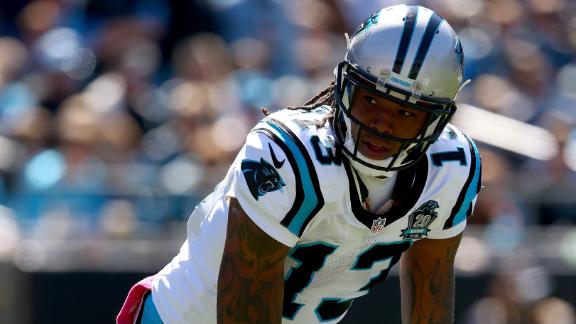 Benjamin did not practice Wednesday, and his status for Sunday's game at Green Bay is in question.

Burfict also was involved in two other controversial plays against Carolina, twisting the ankles of quarterback Cam Newton and tight end Greg Olsen after each scored a touchdown. Sources told ESPN's Ed Werder earlier in the day that the league fined Burfict $25,000 for those acts.

Carolina coach Ron Rivera sent tape of the ankle twists to the league on Monday for further evaluation. He said the league already was aware of the hit on Benjamin.

Rivera said Benjamin came in on Monday complaining of "a little headache." He said team doctors determined the 6-foot-5, 240-pound receiver had a mild concussion and put him into the NFL's protocol for head injuries.

Bengals cornerback Adam Jones supported his teammate, saying Burfict hit him and not Benjamin on the play.

"The one where me and him hit Benjamin, he didn't hit him in his head with that one," Jones said. "He hit my arm. I know because it was hurting.

"That's a bad call. You can't tell the guy not to play the way he plays. If you look back at the film, that's a clean hit."

Rivera said Benjamin passed the concussion protocol on the sideline after being hit in the second quarter by Burfict, who received an unsportsmanlike conduct penalty for hitting a defenseless receiver.

The Panthers coach did not rule Benjamin out for Sunday but is planning in case he isn't available. Brenton Bersin and Philly Brown took Benjamin's repetitions on Wednesday.

"Shorter," Rivera said jokingly when asked what the receiver corps would look like without Benjamin, the team's first-round pick out of Florida State. "We've got a lot of faith in [Bersin and Brown]. We feel our tight ends are weapons. We feel good about the guys that are playing.

"We're running the ball better. The quarterback is running the ball a little bit more now. We'll have Jonathan [Stewart] back on the field, it looks like. I think we're going to be OK whether [Benjamin is] out there or not."

Stewart practiced in full pads after missing the last three games with a sprained knee. He adds much-needed experience and talent to a backfield that has been decimated by injuries.

Stewart left little doubt he would be ready.

The Panthers have been without all-time leading rusher DeAngelo Williams (ankle) the past two weeks. He was at practice Wednesday for the first time since suffering the injury in the first half of a Sept. 28 game against Baltimore, but he was not in pads.

He showed no signs of a limp, but Rivera said the running back is expected to be out at least a couple more weeks.

Also back at practice was cornerback Josh Norman, who missed Sunday's game with a concussion suffered against Chicago. Left guard Amini Silatolu had his left calf wrapped and did not practice. Rivera said Silatolu likely would not play Sunday. Fernando Velasco would take over at left guard, as he did after Silatolu went down against Cincinnati.

Outside linebacker Chase Blackburn, however, suffered a knee injury that Rivera says may keep him out a couple of weeks.

Rivera added that Newton looked good after rushing a career-high 17 times for 107 yards against the Bengals. It was the first time Newton had been turned fully loose to run since undergoing ankle surgery in March. Newton had only 14 carries for 42 yards coming into the game.

If Benjamin can't play, Newton will be without his top target at wide receiver. Benjamin has 31 catches for 416 yards and four touchdowns.

"I'm pretty sure we'll see him sooner rather than later," he said.

Information from ESPN.com Bengals reporter Coley Harvey is included in this report.