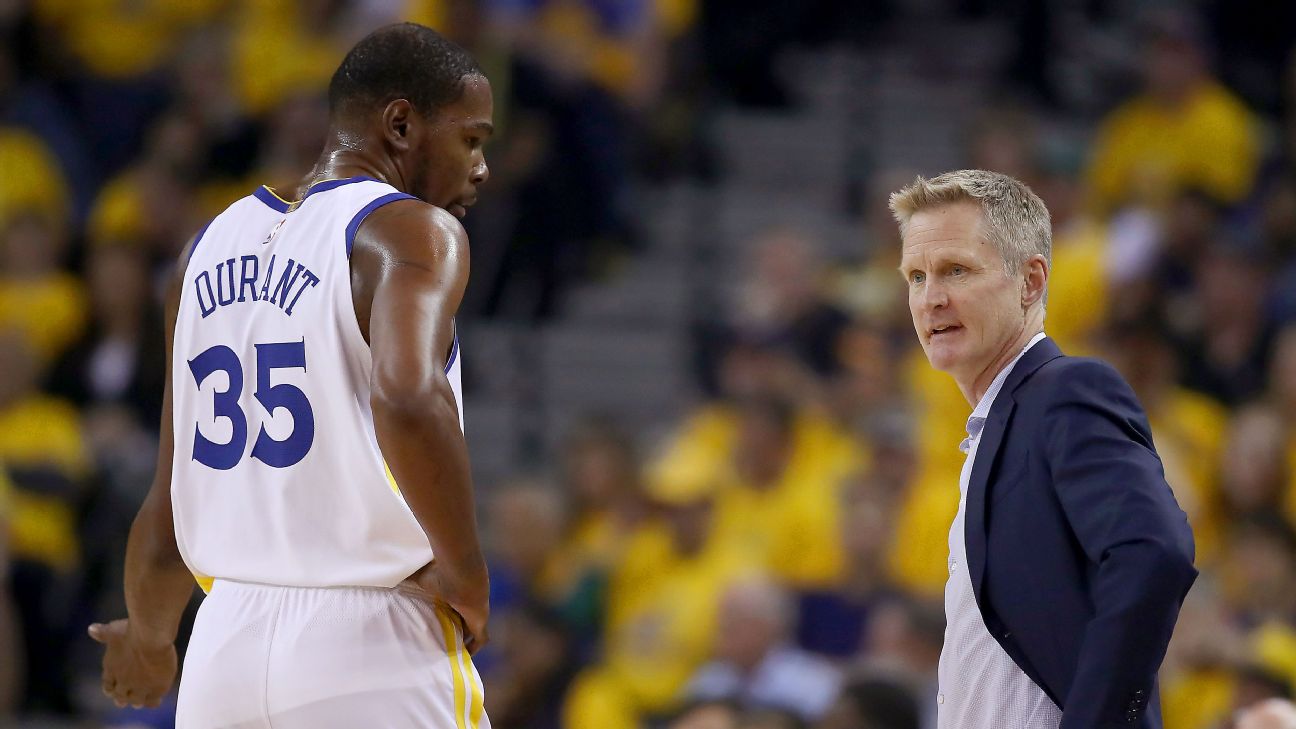 OAKLAND, Calif. -- Golden State Warriors star forward Kevin Durant has been officially ruled out of Game 1 of the NBA Finals against the Toronto Raptors as he continues to rehab a strained right calf.

"KD's not playing Game 1," Warriors coach Steve Kerr said after Monday's practice. "I think we already announced that, and we'll see where it goes from here. This is where the fact that there's a lot of days in between games during the Finals helps us, so we'll see."

Kerr noted that it has yet to be determined whether Durant will travel with the Warriors to Toronto when the team charter takes off on Tuesday, but Kerr said Durant, who injured his calf in Game 5 of the Western Conference semifinals against the Houston Rockets, has yet to do any on-court work with his teammates as he continues the rehab process.

"Not with the team," Kerr said. "If he did anything on the court, it would've been pretty light. I know he's been out kinda shooting some shots, but I haven't talked to [Warriors director of sports medicine and performance] Rick [Celebrini] today, so I'm not exactly sure what he's done today."

DeMarcus Cousins, meanwhile, was listed as "questionable" for Game 1 as he continues to work his way back from a torn left quad. Cousins injured his quad on April 15 in Game 2 of the Western Conference quarterfinals against the LA Clippers. He was initially listed as "unlikely" to return for the rest of the postseason. Kerr has been pleased with the progress the big man has made but acknowledged that the timing of Cousins' return is tough to balance, as the Finals are set to begin Thursday.

"DeMarcus is making good progress right now," Kerr said. "The timing of this whole thing is tricky because he misses two months. It always takes big guys longer to find their rhythm; the speed of their game is so fast. If this was the regular season, this would be simple: Put him back in the starting lineup, and give him his minutes and let him work his way back in and find his rhythm. It'd be an easy one. But we're going into Game 1 of the Finals."

Although the Warriors have been pleased with Cousins' progress, he still isn't moving up and down the floor well enough for him to be cleared for games.

"He's scrimmaged twice. He's working on his conditioning," Kerr said. "The good news is his body feels good, his quad feels good, but he's working his way back into shape and into rhythm, so this is not a simple dynamic for him, and I feel bad for him. This is one of the reasons why he came to this team: It was to play in the playoffs and hopefully go to the Finals. We are, and with Game 1 just a few days away, it's not an easy position to be in."

Cousins indicated he's doing everything on his end to get his body ready.

"It's just about getting my body in shape," Cousins told Marc Spears of The Undefeated after Monday's practice. "My quad muscle in shape and go through the different phases and ups and downs of the game. It has been a tough week. I've been working my tail off to get to this point. But I am healthy enough." 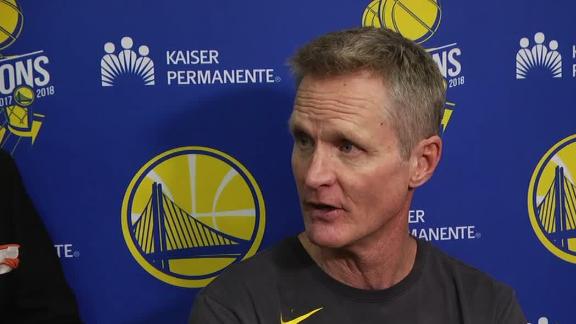