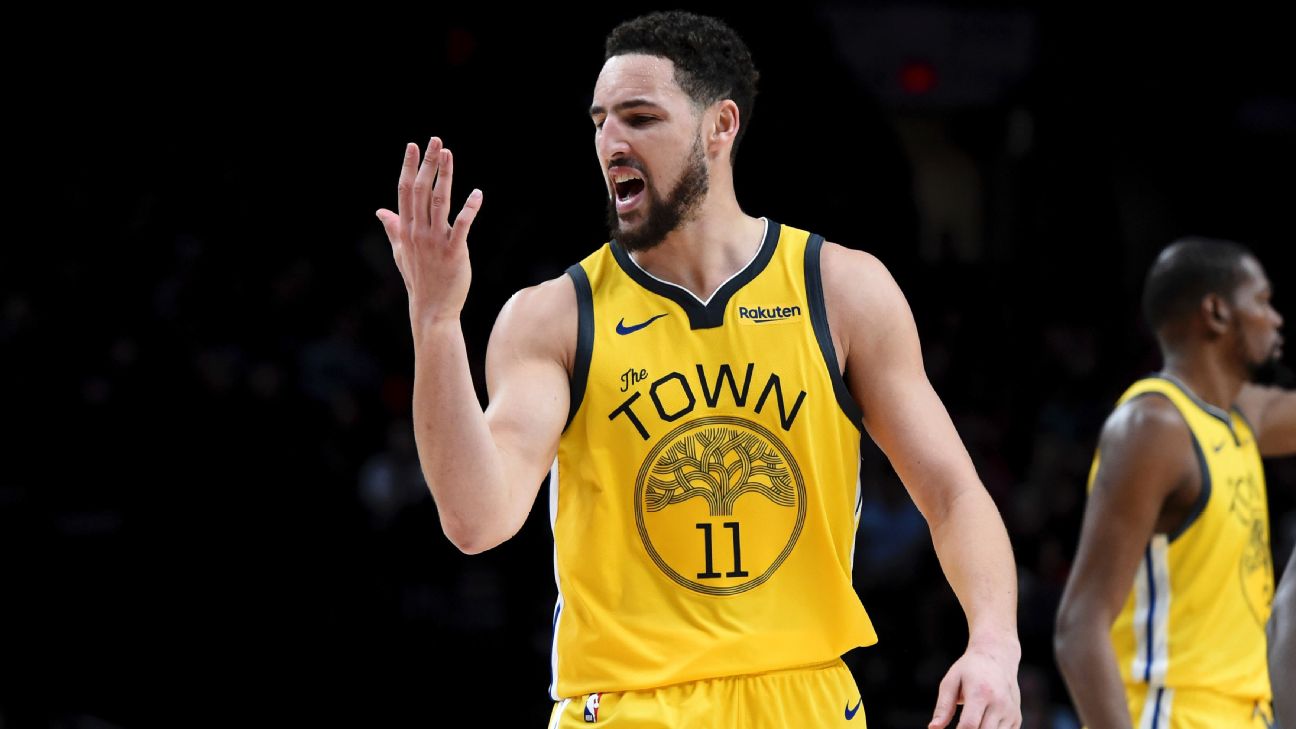 PORTLAND, Ore. -- Golden State Warriors swingman Klay Thompson scored 32 points in a 115-105 win over the Portland Trail Blazers on Saturday night, but it was the pep talk he gave to his right hand in the midst of breaking out of his slump that got more attention than the scoring outburst he and his teammates have been craving.

After knocking down his fourth 3-pointer of the game midway through the fourth quarter, Thompson looked at his right hand and delivered a message that quickly went viral.

"Just, 'I missed you,'" Thompson said after the game of the message to his hand. "'It's good to see you again.' It's been a five-game absence or so where he hasn't been the same. So to finally see the ball go in at a high rate felt really good. Just keep being aggressive and hopefully get on a great roll from here."

Aside from a record-setting, 52-point, 14 3-pointer performance against the Chicago Bulls on Oct. 29, Thompson has struggled to find consistency throughout the season. Coming into Saturday night's game, he was just 21-for-68 from the field in his previous five games and was missing open looks each game. Despite the struggles, neither Thompson nor his teammates lost faith that he would break out of the slump.

"It's Klay," Warriors power forward Draymond Green said. "He's a great shooter. One of the greatest shooters we've ever seen. He's not going to slump forever."

Thompson, who is a proud Washington State alum and spent time growing up around the Blazers because his father, Mychal Thompson, spent the first eight seasons of his NBA career in Portland, acknowledged he feels a certain level of comfort in playing in the Pacific Northwest.

"It's like a second home here," Thompson said. "To be back here playing in front of my family is surreal. It feels like I'm getting old. It feels like just yesterday I was back in these hallways trying to snag autographs, but it's always a pleasure to come back here."

Thompson's resurgence was a welcomed sight for a Warriors team that lost an overtime thriller to the Blazers at home on Thursday night. Thompson's ability to get hot and knock down shots from all over the floor opens up other lanes for his teammates.

"I didn't think the quality of his attempts looked that much better tonight," Warriors head coach Steve Kerr said. "I think the law of averages just took over."

Thompson and the Warriors are hoping his hot shooting will carry over into Monday's game against the Phoenix Suns, but the big smiles after this game came while his teammates were trying to describe how and why Thompson spoke to his hand.

"He's just enjoying himself," Warriors point guard Stephen Curry said. "Playing basketball, that's what he loves to do. And, obviously, it means a lot to him to play well and to work through some tough, tough games. 'Cause every time he's out there, he wants to produce and perform at a high level."

As Curry spoke, Thompson made his way past a small media contingent on his way out of the arena.

"Right, Klay?" he said as Thompson walked by.

Thompson said he wasn't aware that his discussion had become such a hit and was not planning on basking in the glory of the internet fame after the game.

"The internet is a very volatile place," Thompson said. "I don't try to be on there too much because it's a lot of range of emotions. Mass information is crazy, but -- I try to read books and stay away as much as I can during the season because you can drive yourself crazy if you get into Twitter spats with people."