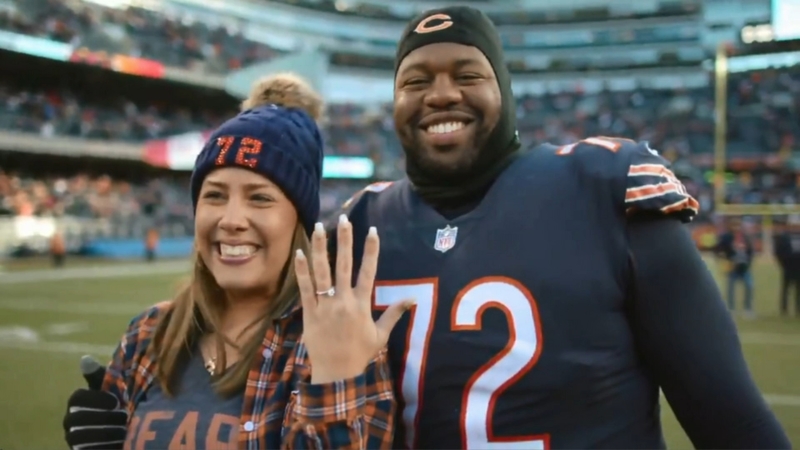 CHICAGO -- The Bear's big 24-17 win over the Green Bay Packers on Sunday only got better after the game for Bay Area native and offensive lineman Charles Leno Jr.

After clinching the NFC North division title, Leno got down on his knee on the field to propose to his girlfriend, Jennifer Roth.

The offensive lineman started off Sunday's game flagged for a false start, but finished strong.

With four minutes left in the game, Roth was asked by Bears staff to make her way to the field.

"They like walk me out into the field and next thing I know I see him with his hands up," Roth said.

Leno was born in Oakland and played football and basketball at San Leandro High School. Roth, a Chicago native and life-long Bears fan said this was the proposal she had dreamed of since she was a little girl.

"He went to go put the ring on my finger, he said, 'why are you shaking so much!?' Roth said.

Roth said she had an idea a proposal was in the works, but Leno made sure to throw her off her game

The defensive move worked and Roth was shocked.

"My mom and stepdad were there and his parents were there and everyone was jumping around. I was like, 'I feel like we just won the Super Bowl,'" Roth said.

The newly engaged couple said they are thinking about a destination wedding. However, for now, they both want to enjoy the engagement and celebrate with Leno's family in the Bay Area when the Bears play the San Francisco 49ers next week.